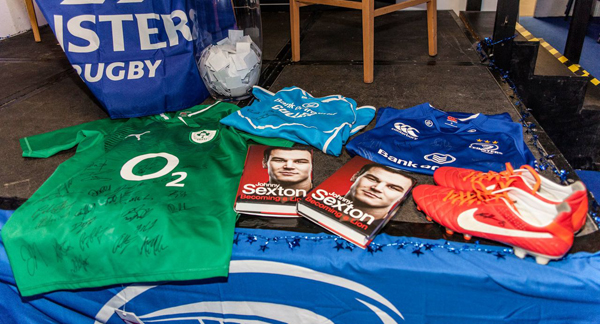 A pre-Christmas table quiz took place in the RDS, which saw over 50 teams competing for prizes with quiz master Brent Pope adding to the festive cheer.

At the conclusion of the table quiz the Club launched its ‘Big Big Signed Stuff Raffle’ with prizes of a signed Leinster jersey, signed Ireland jersey, signed boots from Rob Kearney, signed training jersey from Leo Cullen and two signed copies of Johnny Sexton’s new book ‘Becoming a Lion’ up for grabs.

Limited to just 250 tickets at €;10 each, raffle tickets were avaliable in person and online with many purchased abroad (you did not need to be at the draw to collect a prize).

Marty Moore and Darragh Fanning visited The Laighin Out after the Ulster win on Saturday night to assist with the raffle draw with OLSC president John Martin. Supporters were served complimentary mince pies and mulled wine with donations contributed towards our final total for the charity.

At the conclusion of the draw Marty and Darragh both had photos taken with supporters, we would like to thank them both for helping on the night.

Finally, we would like to thank the following for their support of the table quiz and/or the signed stuff raffle. Without this, we would not have been able to raise such an amount for Crumlin:

The winners of the OLSC ‘Big Big Signed Stuff Raffle’ were:

OLSC committee member Jarrod Bromley has decided to return the signed Leinster jersey to the Club, to be re-raffled for CMRF in the new year

KEEP UP TO DATE WITH THE SUPPORTERS CLUB: