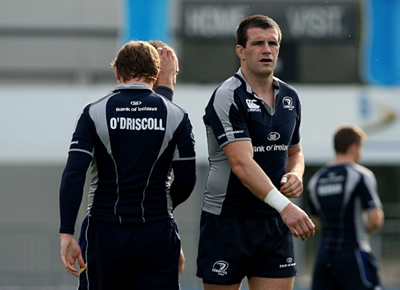 The Leinster team to face the Glasgow Warriors in Friday night’s Magners League clash at the RDS (KO: 8pm) has been named…Match ON After Inspection…

*Following a pitch inspection in the RDS on Thursday morning the game will proceed as planned, however the playing surface and supporter’s areas will continue to be monitored. The Health & Safety Officer Eamonn O’Boyle (from Eamonn O’Boyle & Associates) is drawing up a plan regarding proposed new access routes into the ground for supporters because of the recent adverse weather.

Brian O’Driscoll will partner Fergus McFadden at centre in a backline which sees Jonathan Sexton starting at out-half for his first game since sustaining an injury with Ireland in the recent win over South Africa.

Shane Jennings will captain the side for the visit of Glasgow and is included in a back-row which also features Kevin McLaughlin and Jamie Heaslip, with Nathan Hines partnering Devin Toner at second row.

Close to 14,000 tickets have now been sold for Friday’s Magners League game against the Glasgow Warriors. Tickets can be purchased from www.leinsterrugby.ie , Ticketmaster outlets nationwide and the Leinster Rugby Store and Spar shops in Donnybrook. Ticketmaster vans will also selling tickets outside the RDS from 5pm on Friday.