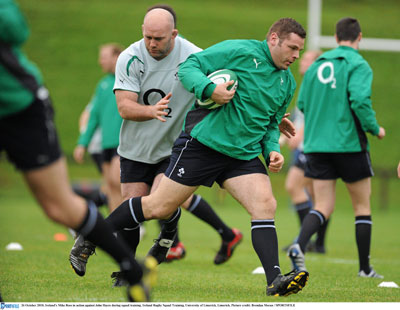 Leinster trio Isaac Boss, Mike Ross and Fergus McFadden have been added to the extended Ireland panel ahead of the second game of the Guinness Series against Samoa in the Aviva Stadium on Saturday (KO: 2.30pm)…

Prop Tony Buckley will miss Ireland’s clash with Samoa on Saturday afternoon and could be sidelined for the remainder of the GUINNESS Series, after suffering hip flexor damage during the 23-21 defeat to South Africa.

With the dust settling on last Saturday’s 23-21 loss to South Africa at the Aviva Stadium, Ireland team manager Paul McNaughton confirmed that prop Tony Buckley has been ruled out of the Samoa game and Leinster full-back Rob Kearney is an injury doubt.

“We have two injuries of note. Tony Buckley has a hip flexor injury and is definitely out for Saturday and doubtful for rest of the November campaign,” he said.

“Rob Kearney has bad bruising on his knee. There is a strong possibility that he is out for Saturday as well, but he should be okay for the rest of the series.”

In addition to the three Leinster players, Ulster back rower Chris Henry and Munster hooker Damien Varley have also joined the panel.