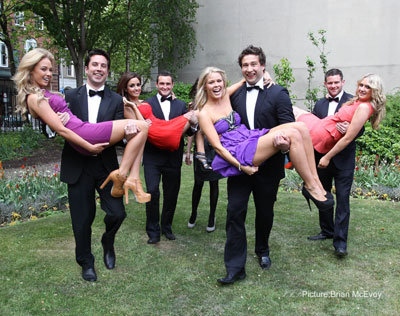 The Heart to Heart Ball is a gala event which is taking place on Saturday 11th June at 7.30pm in the Round Room, Mansion House, Dublin 2. The event will launch the National Children’s Heart Centre’s fundraising campaign to raise money needed to build a much needed new cardiac ward.

Fergus McFadden and David Kearney, commented: “We were delighted to show our support for the Heart to Heart Ball in aid of the National Children’s Heart Centre. We have both supported the hospital before so we were happy to get involved again. In 2003 we did the ‘duck push’ –along with our fellow Clongowes classmates we embarked on an epic task to push two eight-foot yellow ducks across the country to raise funds for Our Lady’s Hospital for Sick Children in Crumlin.”

The National Children’s Heart Centre is located at Our Lady’s Children’s Hospital, Crumlin. It is the only centre providing medical and surgical care for children in Ireland with heart disease.

Dr Orla Franklin, Paediatric Cardiologist added; “We are currently providing world class medical and surgical care for Irish Children with Heart Disease in a ward environment that is not fit for purpose. This worthy initiative gives us an opportunity to change this by launching a fundraising drive to support the building of a dedicated children’s cardiac ward. 1500 children are admitted to the National Children’s Heart Centre in Crumlin annually with over 550 requiring surgery. For the duration of their stay parents and their children are dependent not only of the medical and surgical expertise of the team but are heavily influenced by the environment in which care is delivered as many relocate from homes hundreds of miles away for the duration of their child’s treatment which typically lasts for weeks but may in some cases run into months.”

The ball is set to be a fantastic event with an array of celebrities and acts showing their support. Glenda Gilson will be MC for the night. Performances include Phil Bass & friends, Stiletto Creative, The Shoos and Vogue Wilson. There are some fabulous prizes to be won on the night too. Auction prizes include: Premiership Manchester United tickets in Old Trafford Stadium, a pair of Leinster Season Tickets and Round of Golf with Ryder Cup player Des Smyth as well as a huge range of Raffle prizes to be won on the night.

Background on the Children:

Eve Rigby’s heart problem which consisted of a large hole in heart with a complex narrowing of left heart structures was diagnosed 20 weeks before she was born by Orla Franklin and Sean Daly at the Fetal Cardiology Service at the Coombe Women’s Hospital. She had a successful surgical correction in the first week of life and is currently doing well.

Holly Keogh has severe Heart Failure and is ultimately likely to need cardiac transplantation. She has already been assessed by the team in Great Ormond Street although the centre hope’s to hold off on transplantation for a long as possible. Anna Shannon had surgical repair of a hole in her heart 3 weeks ago and is doing extremely well.

For anyone who would like to attend the Ball in the Mansion House on the 11th June 2011 please e-mail Sophie@museevents.ie or Ivano@afterdark.ie or call 01-7752766.

All fundraising for the centre is processed through the Crumlin Medical and Research Foundation which is a registered Charity.