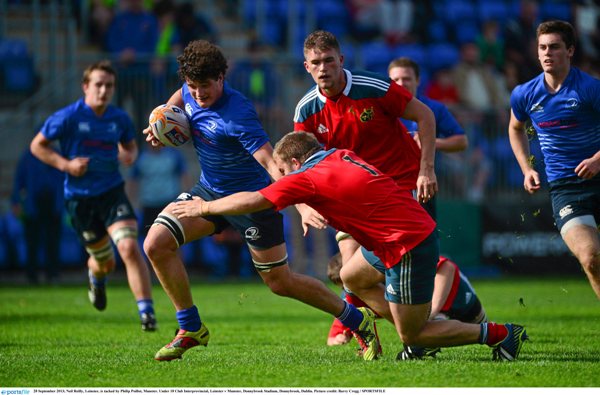 The Leinster Under-18 Clubs team, sponsored by Newstalk, put three tries past Munster as they won 25-6 in the first round of the interprovincial series at Donnybrook on Saturday…

Leinster fly-half Ciaran Frawley had to have his wits about him first rescuing a low, loose pass on the floor and then ducking inside a big hit as Munster came hard and strong in the early stages. It had all the hallmarks of a typical East-South derby.

The home side was stopped from running out of defence and killed the ball as they piled into a ruck but Munster centre Mike Mulally could not make his kick count.

The Southerners continued to play in the right area. They looked increasingly dangerous until flanker Tom Cuddihy forced a penalty on the floor. The game began to open up, first Munster wing Brian Fanning making ground in midfield, then Leinster’s Ger O’Connor weaving his way out of his 22. Eventually, Munster opened their account from Mulally’s penalty in the 10th minute.

The response was impressive as Leinster number eight Neill Reilly and flankers Cuddihy and Conor Farrell got their hands on the ball.

The persistence of full-back Ronan Wallace paid handsome dividends when a clearance ricocheted off his arms for centre Peter Howard to retrieve and hare away for a try for Wallace to convert in the 27th minute.

A bout of kicking concluded with Leinster players advancing ahead of the kicker lock Joe Carley for Mulally to reduce the deficit to 7-6 with his second penalty on the half-hour.

The visitors looked to have defended an attack when wing Bobby Smith hammered Wallace in the tackle. But, the ball bounced around for centre Conor O’Brien to pounce for a second try. Wallace added the conversion for 14-6 at the interval.

Munster’s indiscipline let them down. They conceded a penalty at a ruck and compounded it with backchat to put Wallace within range to hit a penalty in the 38th minute. He was back in the same place to nail another one in the 42nd minute.

It could have been even better, but Wallace’s next trigger from distance shot just right of the posts. They had to wait to the 56th minute for an attack down the short side where second row Conor Hand to get over near the corner flag.