Leinster U-20 turn on style in Munster win 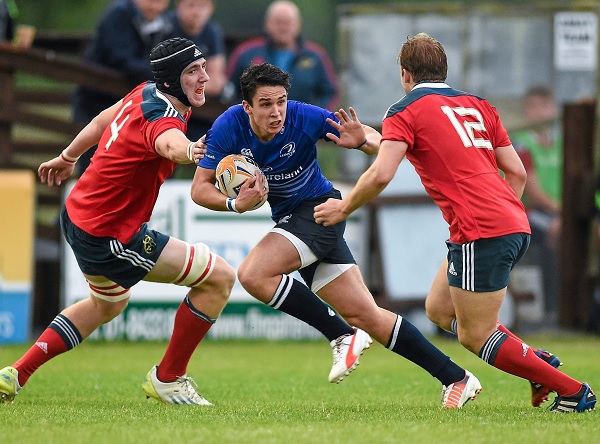 The Leinster U20s were as good as advertised in a high-tempo, high quality 32-20 victory over Munster on the opening evening of the U20 Interprovincial Championship out in Ashbourne RFC on Friday.

The relaying of a new surface at Donnybrook has forced the Leinster Age-Grade teams to look for alternative venues for the Interpros and there are few more intimate than the County Meath club.

On a balmy night and a fast track, Munster were first to threaten, wing Greg O’Shea and Paul Kiernan combining on a raid down the right before Leinster centre Conor O’Brien’s offload almost released Harrison Brewer down the other end.

Soon, Munster half-back Jack Cullen latched onto a grubber for what looked like a try only for Jack Power to whip away his legs in the tackle. The full-back did not release, and the resulting Munster penalty from fly-half Tomas Quinlan whacked against the upright.

Not long after, Leinster centre Harrison Brewer cut back for a gain of ground, but fly-half Joey Carbery’s side-door pass was seen as forward. They came again. Brewer made the gain line. Left wing Robert Vallejo showed awareness to flip the ball inside for second row David O’Connor to eventually touchdown for 5-0 in the 11th minute.

Munster’s restart went sky high to allow their chasers to apply pressure. The mistake came and it was compounded by a scrum penalty which was nicely dispatched by Quinlan in the 15th minute.

The smash and grab tactics of Leinster’s hitting turned defence into attack for prop Andrew Porter to split the first line of resistence. Flanker Conor Oliver calmly drew in the last defender to send number eight Nick Timoney into the left corner. Carbery made the touchline conversion look like a formality for 12-3. 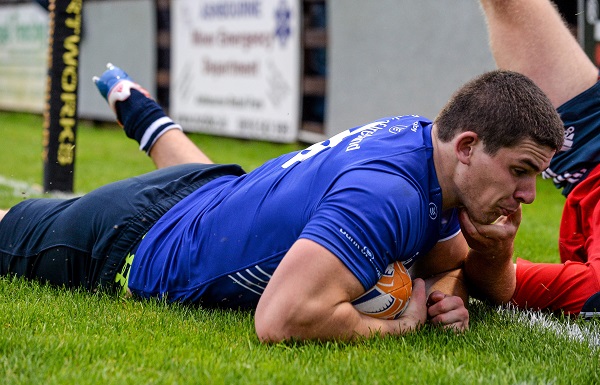 The confidence started to flow for the boys in blue. Second row Jack Dwan scythed through the middle and intelligently delayed his pass for the onrushing traffic. Adam Leavy’s sleight of foot almost worked down the right.

Then, Oliver had to be vigilant to haul down Gearoid Lyons. Scrum-half Cullen seized on Leinster’s disorganisation to eat up the ground, creating an overlap which O’Shea put on the floor.

Increasingly, the game was being played on Leinster’s terms. Munster tended to look for territory, while the blues looked for space on the counter-attack, none more than Power, whose movement onto an inside ball was the key to Leavy’s swift finish in the 31st minute. Carbery converted from the left touchline.

Referee Stuart Gaffikin decided that prop Andrew Porter’s illegality at scrum time was deserving of a yellow card. He followed Power into the bin. The temporary reduction to fourteen men was set aside as Carbery lashed over a penalty from distance in added time.

Munster front rowers Mick O’Donnell and Sean McNulty powered onwards for real front-foot ball that full-back Fitzgerald almost turned into a try only to be called back for a forward pass to leave it 22-3 at the interval.

The visitors started with a renewed sense of purpose, Fitzgerald posing a danger on the ball and Cullen moving it quickly away from the base. They couldn’t turn it into points. 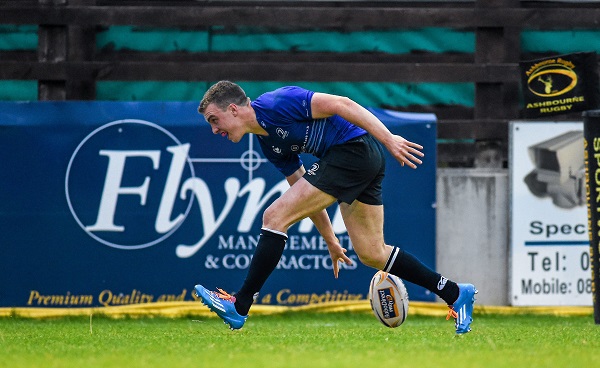 Leinster’s precision was too much to handle. Vallejo came in off his wing to spin the ball wide for Power to set up the recycle. A revived Porter hammered onto a flat pass for the fourth try in the 48th minute, converted by Carbery.

The basics were killing Munster as they were able to create openings without the accuracy to make profit out of them, despite the impact of flanker Luke O’Leary, centre Paul Kiernan and Fitzgerald. Within the space of a minute, they were held up over the line and knocked on over it.

Eventually, they got their reward as lock Frank Bradshaw-Ryan steamed to the line off the back of a lineout for centre Gearoid Lyons to kick the extras for 29-10 in the 63rd minute.

They just could not consolidate straight away. Leinster forced a penalty from the restart and Carbery knocked over another three-pointer before Munster’s persistence paid off again through replacement prop Liam O’Connor.

Leinster had their chances to respond. Replacement Greg Jones almost put Porter in for his second. But, it was Munster’s solid work in close that worked to the benefit of O’Connor for his second to narrow it down to 32-20 in the 79th minute.