Leinster U18 Girls off to a winning start 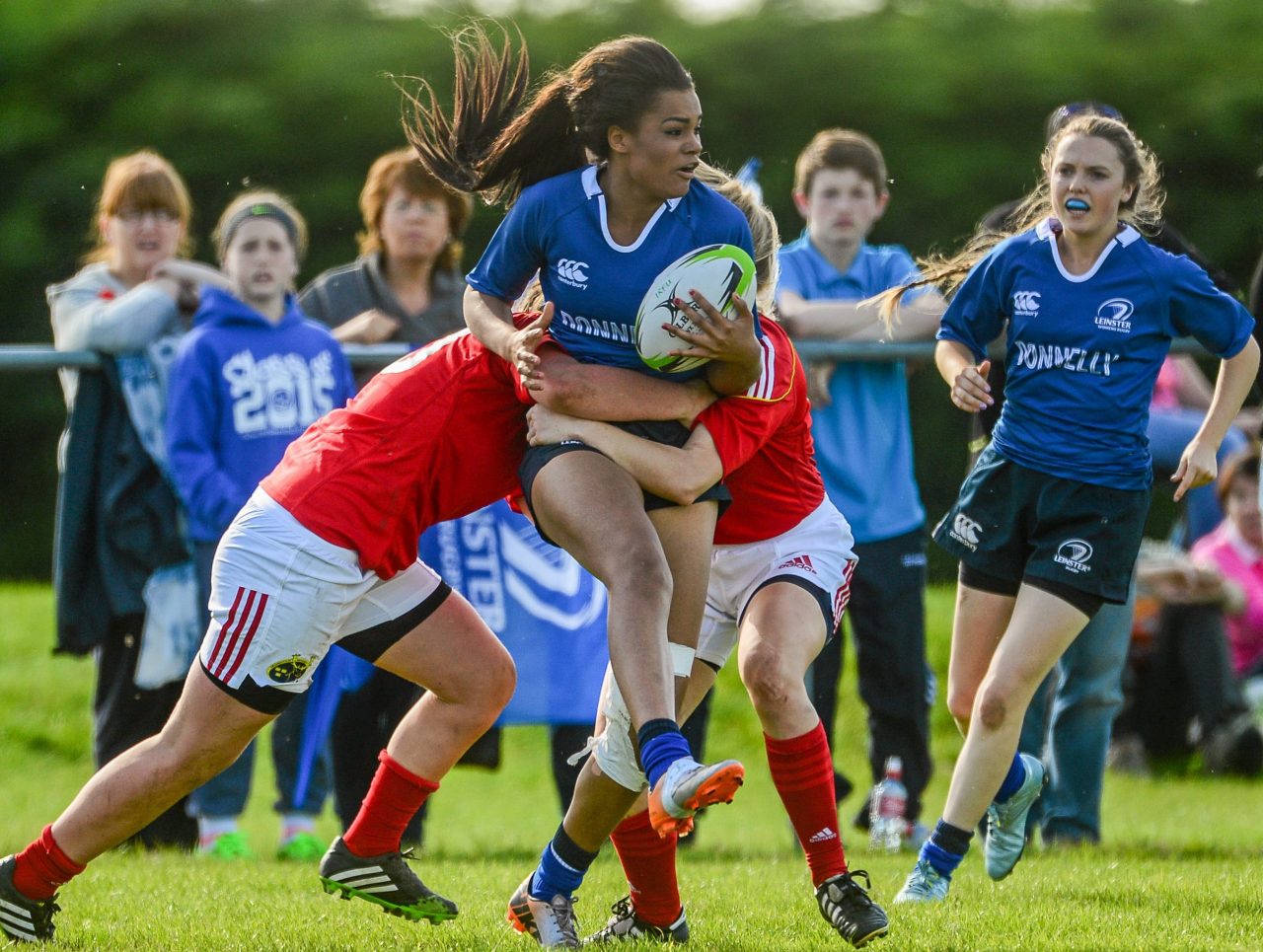 Leinster’s U18 girls got their 2015 Interprovincial Development fixtures off to a winning start on Saturday, 26 September with comprehensive victories over Connacht and Munster in Westmanstown RFC.

Taking on Connacht in their first game, the Leinster girls exerted lots of pressure from the start but handling errors and a firm Connacht defence kept Leinster out.  The stalemate was broken in the 10th minute after a great break by Bethany Sharpe was followed by a try from Ciara Patrick.  The conversion attempt bounced off the post but Connacht fought back on the restart.

The Leinster defence remained firm, however, holding up a Connacht try on the 15th minute.  Text book tackling from Kayleigh Sullivan and attacking runs from Niamh Doran saw Leinster regaining the upper hand and the score remained 5-0 to Leinster at half time.

Leinster upped the tempo from the start of the second half, with plenty of attacking runs and improved passing. The Leinster girls were awarded a penalty on the 30 minute mark which Liz Brophy put over the bar – 8-0 to Leinster.

Leinster kept up the pace and a superb break by Kayleigh Sullivan and excellent passing saw Eimear Corri going over in the corner.  The conversion attempt was short but Leinster led 13-0 after 35 minutes.

More great attacking plays and tackling, particularly from Mary Healy, saw Leinster dominating proceedings with Liz Brophy touching down for the girls’ third try of the day on 38 minutes.  The conversion was missed but a break by Rachael Griffey was stopped by a high tackle and Liz Brophy kicked the resulting penalty to bring the final score to 21-0 to Leinster against the spirited Connacht side.

The Leinster girls took on Munster in their second game of the day.  Having beaten Ulster 10-0 earlier, the Munster girls were hoping for their second victory of the day.  Leinster had other ideas though and a superb try from Eimear Corri in the opening minute after an excellent break by Louise Scully set the scene.

The conversion was missed but Munster fought back and Leinster were penalised for hands in the ruck, with Munster’s Enya Breen kicking the points. Leinster’s captain Caoimhe Molloy led the charge back as the girls in blue were held up on the line.  Leinster kept up the intense pressure on Munster and some superb play saw Ciara Patrick touch down for her second try of the day.  Liz Brophy added the conversion, bringing the score to 12-3 to Leinster. 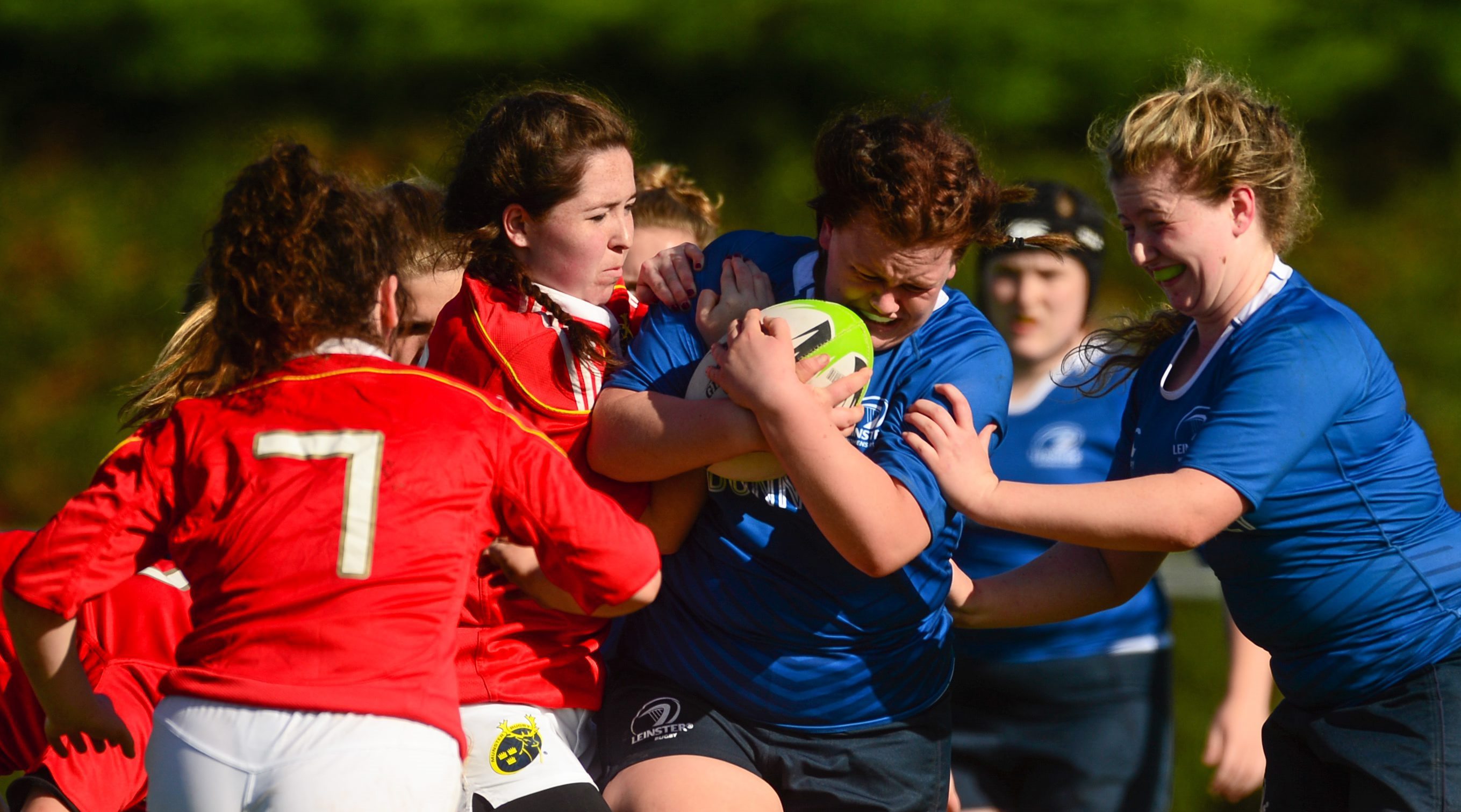 The Leinster girls continued to dominate proceedings and their efforts were rewarded with a try in the corner from Megan Burns.  The conversion attempt was just short but Leinster kept up the pressure. More excellent tackling from Mary Healy meant Munster couldn’t breach the Leinster defence and it remained 17-3 at half time.

Munster opened the second half with some pressure of their own and Yvonne O’Shea touched down on the 25th minute to bring the score to 17-8 after the conversion attempt bounced off the posts.

Leinster regrouped and more excellent passing saw Megan Burns score her second try of the day.  The conversion attempt was short and Munster fought back by exerting lots of pressure on the Leinster lines.  The girls in red were awarded a penalty in front of the posts and they ran the ball, Yvonne O’Shea crossing the line again on the 35th minute and bringing the score to 22-13 after the conversion attempt was wide.

Leinster got straight back into it and Louise Scully showed the way with a try on the 40th minute mark – 27-13.  Munster weren’t finished yet though and they came back at Leinster, scoring a try just before the final whistle and giving the full time score of 27-18 to Leinster. 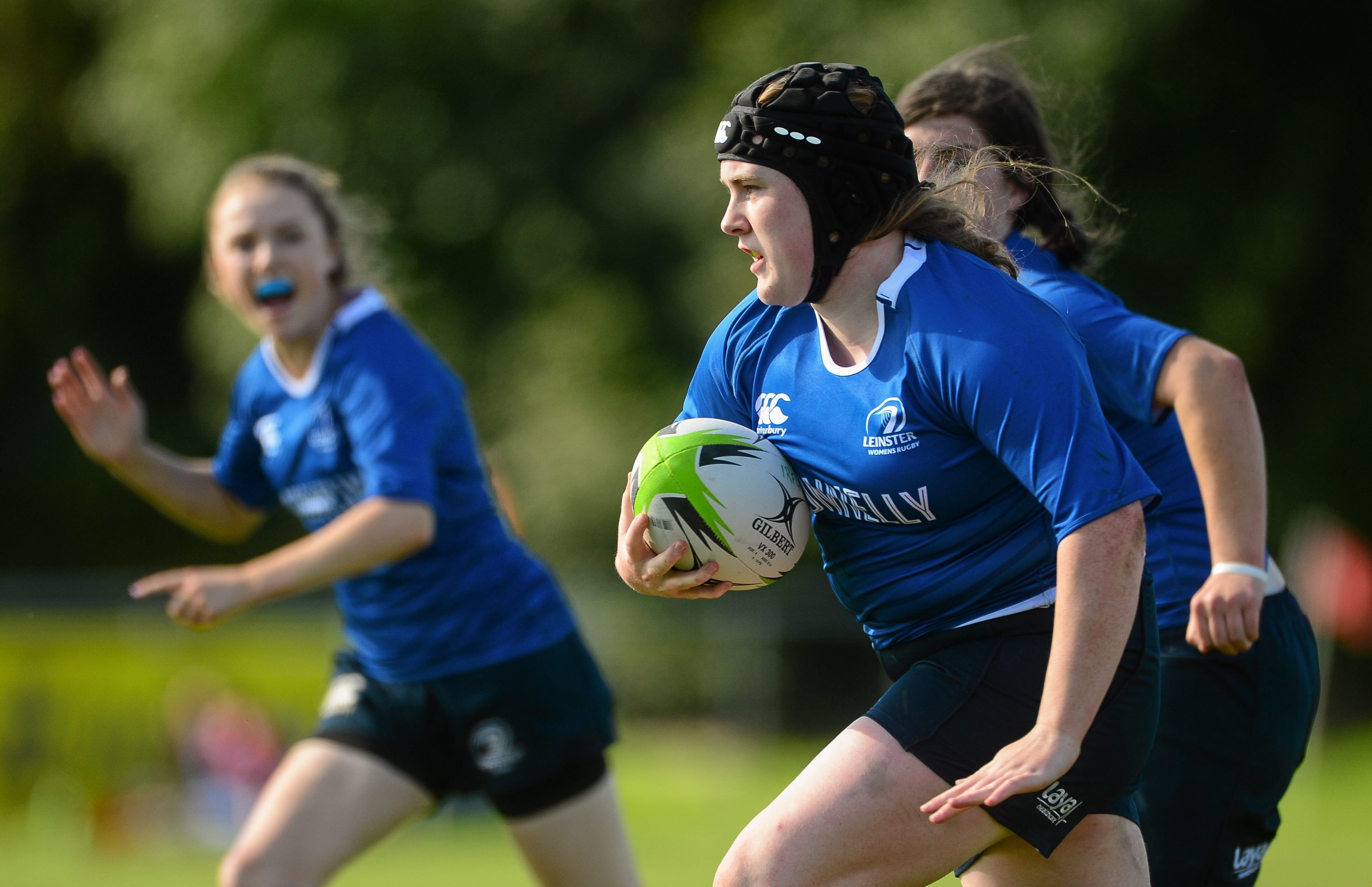 Two assured performances from the Leinster girls mean they head into their final game against Ulster in Portadown RFC  next Saturday, 3 October at 2 pm. with a chance of a full sweep in this year’s Interprovincial Development Series.