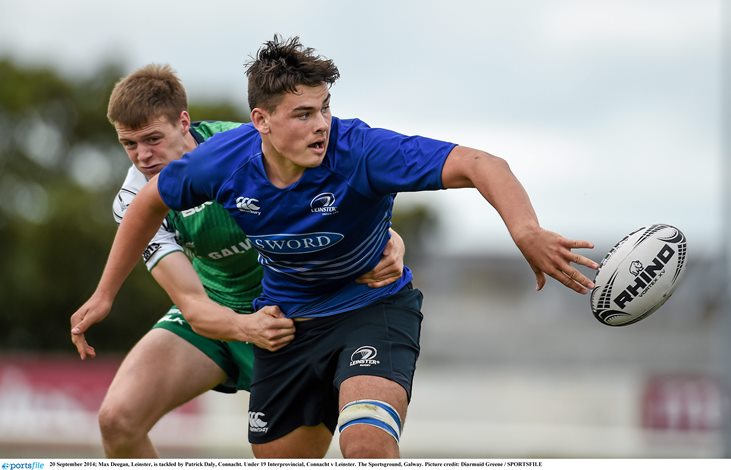 A 19-10 win over Munster coupled with their 40-13 demolition of Ulster had set the boys in blue up for the championship and they followed through with a comprehensive victory here.

Tries from Vakh Abdaladze, James Ryan, Will Connors, Nick Peters, Hugo Keenan and Jake Howlett did the trick as Alan Hughes hit eight points with his boot and Leinster strolled to an impressive win.

The performance of Max Deegan was a particular highlight for Leinster as the rangy St Michael’s man was a leader for Leinster and looks to have a huge career ahead of him.

In perfect conditions for rugby Connacht began brightly but a few unforced errors in Leinster territory eased the pressure and the visitors moved up-field gradually.

Leinster soon began to find gaps and when Connacht strayed offside Clongowes student, Alan Hughes found the corner with the penalty and the initial drive resulted in another indiscretion from Charlie Couper’s men.
Leinster didn’t settle for the points however and instead Deegan claimed the line-out, from here there looked to be only one outcome as Leinster drove Connacht back and captain Ryan peeled to deceive the Connacht covering tackles and score the try in the 12th minute.

Connacht came right back at them, some incessant pressure finally garnered an opening and Tom McHale combined with Charlie McMicken before Ruairi Greene found himself in space and darted home to tie the game.

McMicken made the simplest of conversions and Connacht lead 7-5 with 22 minutes gone.

In another splendid piece of opportunism four minutes later, Leinster’s David Poff saw an opening and kicked through as the on-rushing Keenan showed a clean pair of heels to opposing centre Andrew Lynch and dived to apply the downward pressure for Leinster’s second try.

The Blackrock man’s try was expertly converted from the touchline by Hughes and Leinster lead it by 12-7 with nine minutes left in the half.

Leinster’s superior power and size was taking its toll on Connacht and when the hosts lost their own line-out on their 22 it took just a couple of phases before Leinster had their third try, this time flanker Will Connors raced over with Hughes adding the extras.

It was 19-7 to Hugh Hogan’s side at the break and the start the second as they finished the first and pinned the Connacht attack deep inside their own before they forced a mistake and created a wondrous five-pointer.
Leinster won their own line-out and after dragging Connacht back and forth across the field, they switched their play. The magnificent Deegan’s peripheral vision was in check and flicked an audacious pass to Abdaladze who had the easiest of run-ins.

The conversion matched what had gone before as Hughes sublimely finished from the touchline to give them a 26-7 lead six minutes into the second-half.

Gonzaga College’s, Peters made a telling contribution before his withdrawal when he got his name on the scoresheet as well.

Connacht had given away a penalty advantage when they couldn’t contain another period of intense Leinster pressure and Peters spotted the missing pillar before scampering over under the posts, which Hughes converting once more and Leinster led it 33-7 with 51 minutes played.

Connacht finally had another bit of territory around the hour mark but they could have had a try earlier than that when Michael O’Connell had the try-line beckoning but failed to give the pass when there were players better placed and he instead knocked-on.

What happened after that summed-up Connacht’s afternoon in a nutshell: they punched their way to within inches of the Leinster line and with a try looking most likely, McMicken’s pass was picked off brilliantly by No 13 Jake Howlett who ran the length off the field for their sixth try of the day.

Substitute Tommy Whittle missed the conversion but Leinster still wanted more as only a late knock on ended Connacht’s woes.