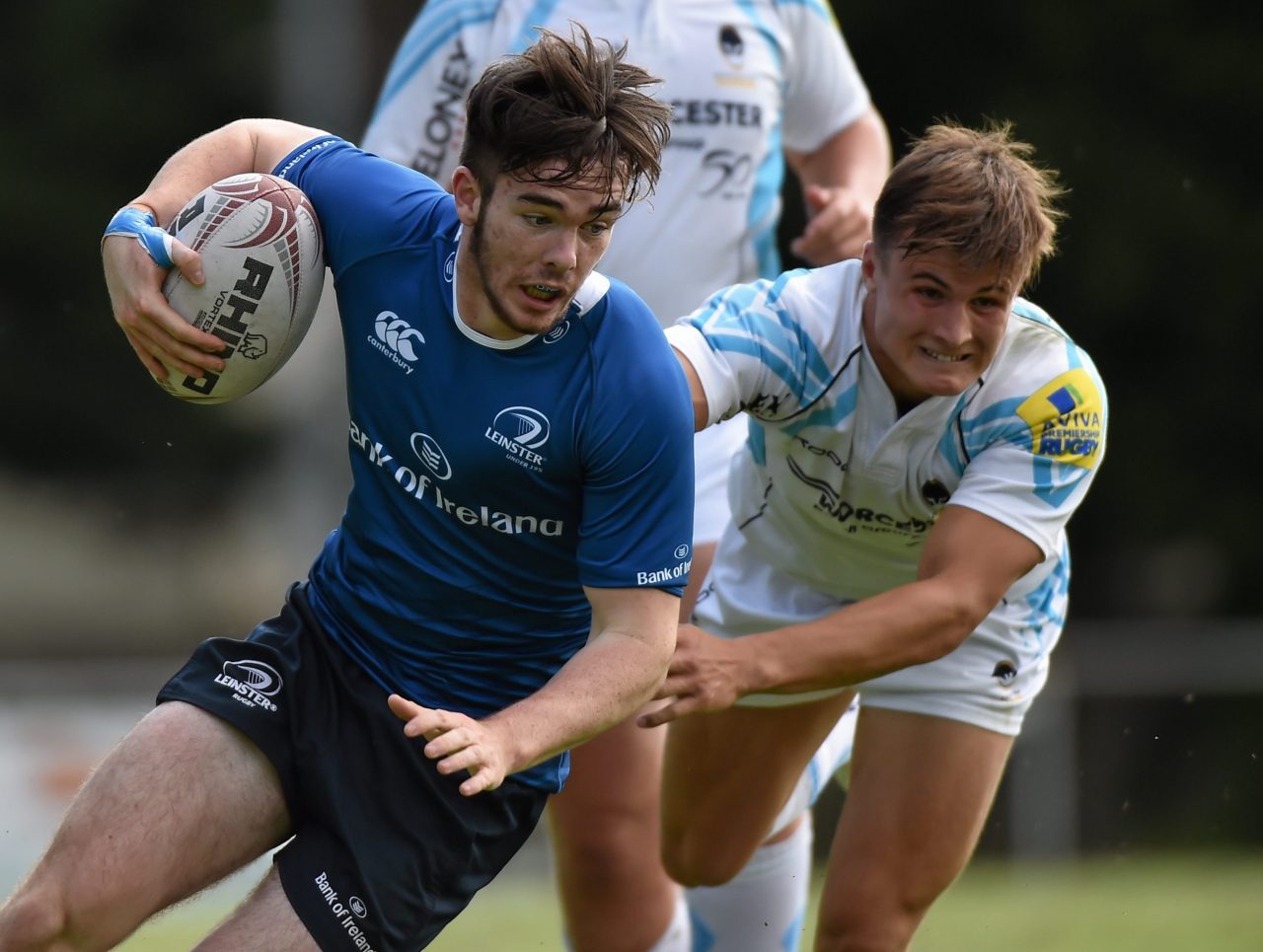 Leinster U19’s squad, sponsored by Bank of Ireland will face Connacht this Saturday 5th of September at home in Donnybrook Stadium, KO 17:00

Coach Morgan Lennon was staring right down the barrel of an injury crisis when seven of his players had to be removed from the action against Worcester in their final warm-up for the U19 Interprovincial Championship.

As luck would have it, Lennon would escape relatively unharmed, except for knee ligament damage to openside Matty Keane, Cistercian Roscrea’s Leinster Senior Cup medallist from March.

Overall, Leinster have put three victories together beginning with a completely wasted exercise when they crushed Moseley 77-5, the level of competition nowhere near the mark needed in order to properly assess the boys in blue.

From there, they made their way to the beautifully appointed Malvern College where Worcester Warriors were an improvement even though Leinster dealt well with them to come out 36-7 winners.

“We were very good on the ground, won the scraps, and played some good rugby in patches in that one,” said Morgan Lennon.

“There was real strike power from the back three, a strong scrum and all-round set-piece in the five tries-to-one win.”

Out-half Ciaran Frawley showed real glimpses of class as he created two tries and worked the ball well around the field.

Worcester made the return to journey to Templeville Road where they bolstered their squad with better resources, bringing in size, strength and pace to counter Leinster’s superior dynamism and skills.

Former Ireland Schools wings Jordan Larmour pinched two tries for four in two matches, looking at home in the centre where the idea must be to the get the ball into his hands more often.

Full-back James McGowan was a steady contributor with the boot and this allowed Frawley to spin his web of tricks for the outside backs.

The rate of attrition was worrying, to say the least, captain Paul Boyle lasting just 10 minutes before the bodies started to go down regularly.

On reflection, Leinster were pleasantly surprised to learn they suffered minimal losses, save for Keane, as the Interpros begin at home to Connacht in Donnybrook on Saturday September 5th.

This is the first time the Leinster Clubs have provided more than 50% of the squad to the U19s or U20s. It is a sign of the relentless and consistent progress being made in the provincial clubs.

This is evident in the forward pack that took on Worcester, second time around, with Boyle leading an eight including Birr RFC lock Jack Regan, the son of former Offaly All-Ireland winner Daithi, Enniscorthy RFC blindside Joe Carley, Dundalk hooker Tadgh McElroy and Suttonians tight-head Jack Aungier with Longford prop Eoin Corcoran and Navan flanker Conor Farrell among those introduced from the bench.

Ex-Ireland Schools scrum-half Dave Duggan will supply Frawley with the service to bring the Schools dominated three-quarter line into the game. The second-receiver distribution of Tim Foley and game-breaking timing of Larmour can unlock defences with Gavan Mullen, son of British & Irish Lion Brendan, a likely option.

The Interpros bring to the table the intangible measure of ‘bragging rights’ between the provinces.

Their coach Eamon Molloy has been around long enough to know what works against Leinster, although he will have a difficult task given how they lose their better players to the Connacht U20s, purely on the basis of their meagre playing resources.

However, they do have quality operators, especially in last season’s Ireland Clubs out-half Luke Carty, the younger brother of Jack, who will be cautioned to take Connacht out of trouble with his cultured use of the boot.

Captain Tim Costigan, formerly of Glenstal Abbey, is a go-to man in the centre beside ex-Leinster Clubs midfielder Christian Byrne, while back rower Malcolm Hanley is another one watch.

Connacht did have a very useful trial match against Munster last week out of which coach Molloy got a clearer picture from the 28-21 defeat.
One hour after Leinster and Connacht get down to business, Ulster and Munster will kick-off at Queen’s University on Saturday.

The Ulster boys warmed up with a convincing 42-7 win over The Exiles U20s in Stockport last week in their only outing under the eye of former Ireland wing Jimmy Topping with prop Blaise McKnight looking the business.

Munster coach Colm McMahon has used wins against Kanturk and Connacht U19s to put a shape to his side and he has an interesting choice to make at fly-half where Conor Fitzgerald and Jack Stafford will tussle for the jersey.