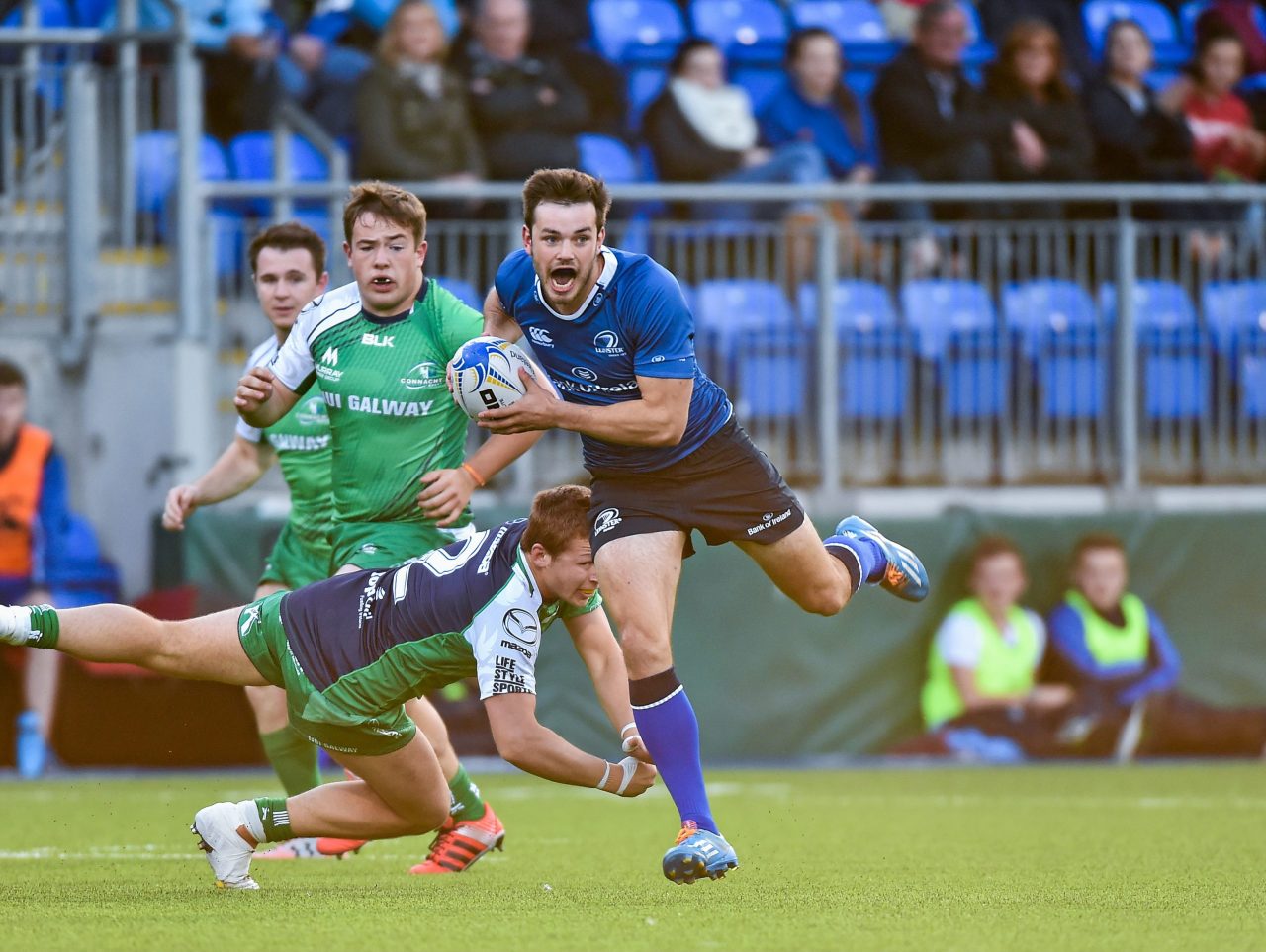 Hugh Hogan’s Leinster steamrolled their way to an impressive six-try overhaul of Connacht to open their U20 Interprovincial Championship account at Donnybrook on Friday night.

Connacht brought a giant pack of forwards backboned by tight-head Conor Kenny and locks Cillian Gallagher and Peter Claffey, their captain. It was advisable for Leinster to lift the tempo and to move the ball wide when appropriate.

Fly-half Tommy Whittle switched his kick-off to mine a penalty. The lineout was stolen by Gallagher and rifled clear by his out-half Simon Keller.

A partially blocked ball was taken up by Leinster full-back Hugo Keenan for right wing Matt Byrne to take the ball on a switch move and provide left wing Terry Kennedy with a risky pass for a wonder try in the fifth minute.

The first put-in was struck against the head by Connacht and they went quickly from a free kick. They were turned over at the ruck. Byrne was almost away again down the right.

Leinster number eight Max Deegan made his first break and Keenan was a fingertip away from putting Kennedy clear on the left. Deegan was back for more, his influence tarnished by a spilled ball.

The home side turned the screw in a scrum to earn a penalty. Hooker Hugo Kean was spot-on from the lineout and flanker David Aspil was in the van to double the lead in the 16th minute. 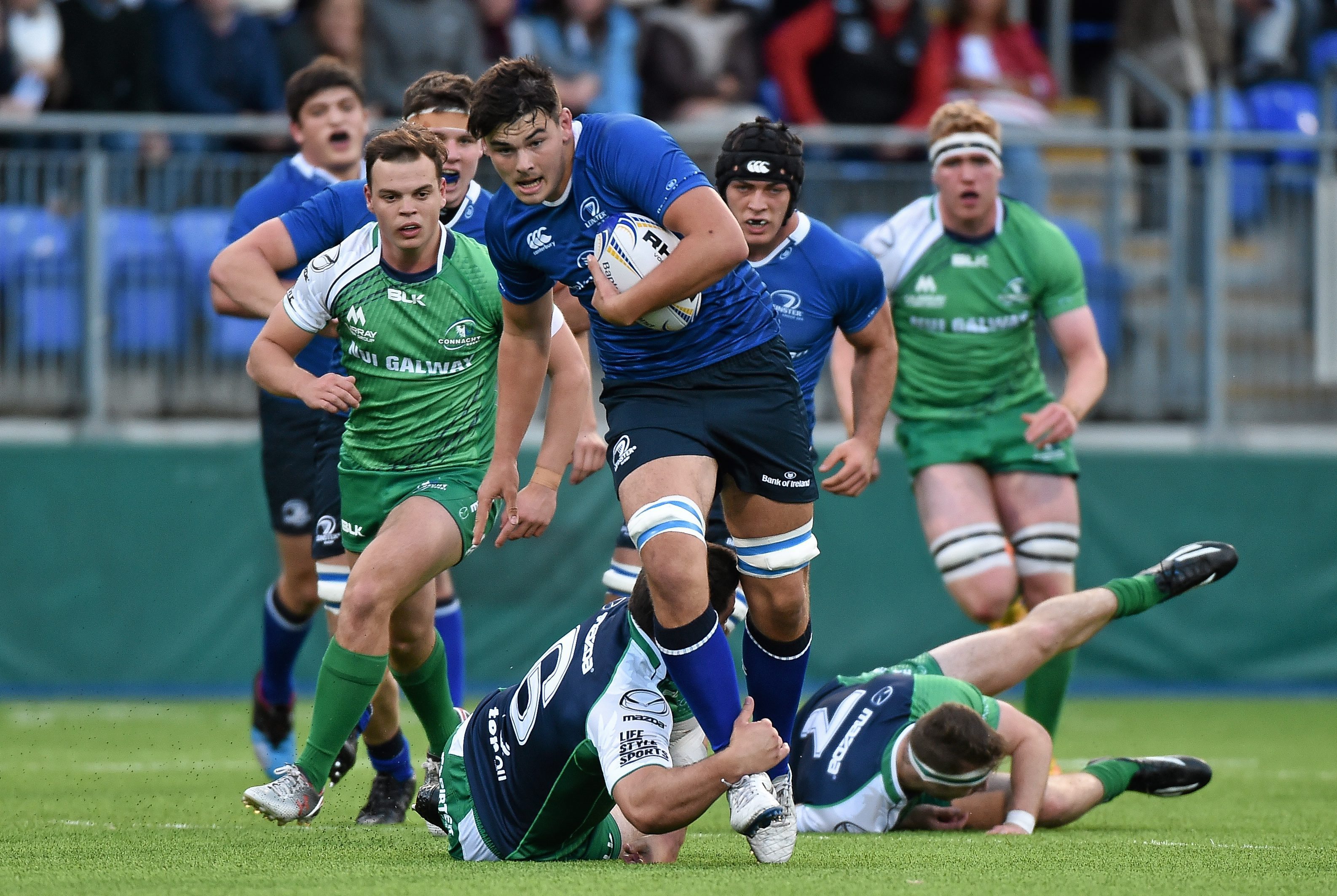 The Connacht scrum churned out a penalty for scum-half Steven Kerins to hare away for 30 metres. The support was too slow and the attack died.

A lightening counter sparked by Byrne’s bravery onto a loose ball was spoiled when Kennedy’s inside pass went astray. A tremendous carry by flanker Matt Burke took The Westerners out of trouble.

They were falling into the trap of playing the scoreboard, moving too much ball from their own territory. Leinster stayed patient in defence and forced the fumble, this time out of prop Matthew Murphy.

Leinster full-back Keenan made his way home from a nice inside ball from centre Jimmy O’Brien and Whittle converted for the first time for 17-0 on the half-hour.

Openside David Aspil was a scourge at the breakdown. It was his turnover that almost culminated in a fourth try, Byrne thwarted ten metres out. They had to settle for Whittle’s penalty.

The superb work of Connacht left wing Jack Keegan in the air from the restart created the front-foot ball to draw a penalty, Keller pulling it left of the posts just before the break.

Leinster were soon up to speed as Deegan and flanker Will Connors took the ball on for hooker Kean to make a dent in the centre. They looked good for points until Connacht centre Ryan Feehily reached out for an interception. 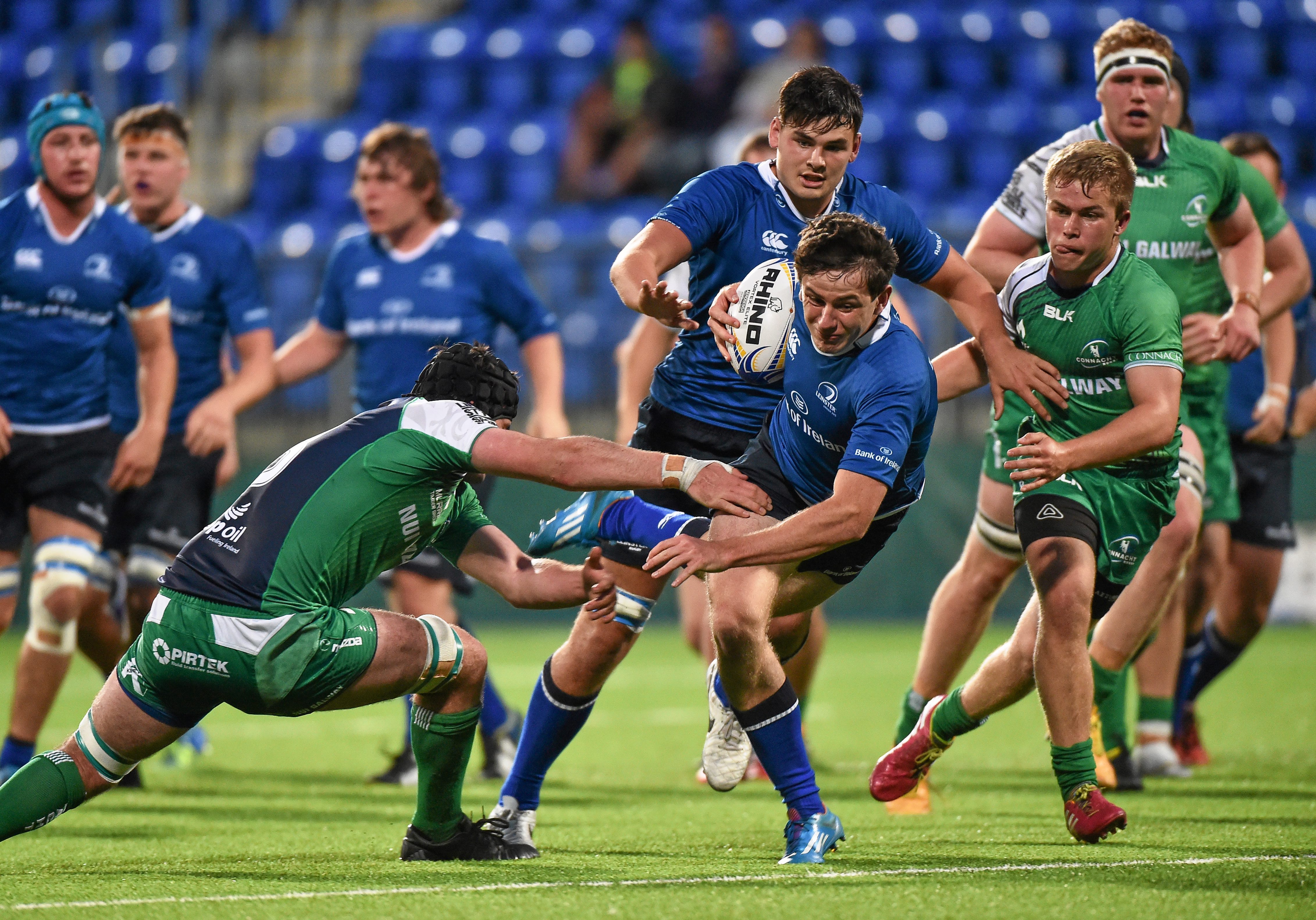 The visitors did manage to get number eight Matt Cosgrove and Claffey motoring. The just didn’t have the wherewithal to make it count, a lineout malfunctioning from five metres out.

The boys in Blue were not quite as generous. They made their passes tell for wing Byrne to accelerate into pace and his sweet pass put Kennedy in for his second try in the 53rd minute.

Scrum-half Nick Peters sniped from a tap penalty to put Connacht on the back-foot. It took a moment of indiscipline to keep them out even though Whittle managed a second penalty.

The heat went out of the contest with a host of changes. It was left to flanker Aspil to claim his second try for 33-nil in the 73rd minute.

Connacht came looking for some shade of consolation from full-back Tim Carroll’s counter and Claffey picked up a try for replacement Charlie McMiken to land a conversion in the 78th minute.

It was left to quicksilver Kennedy to round out his hat-trick with Whittle converting on the final whistle. 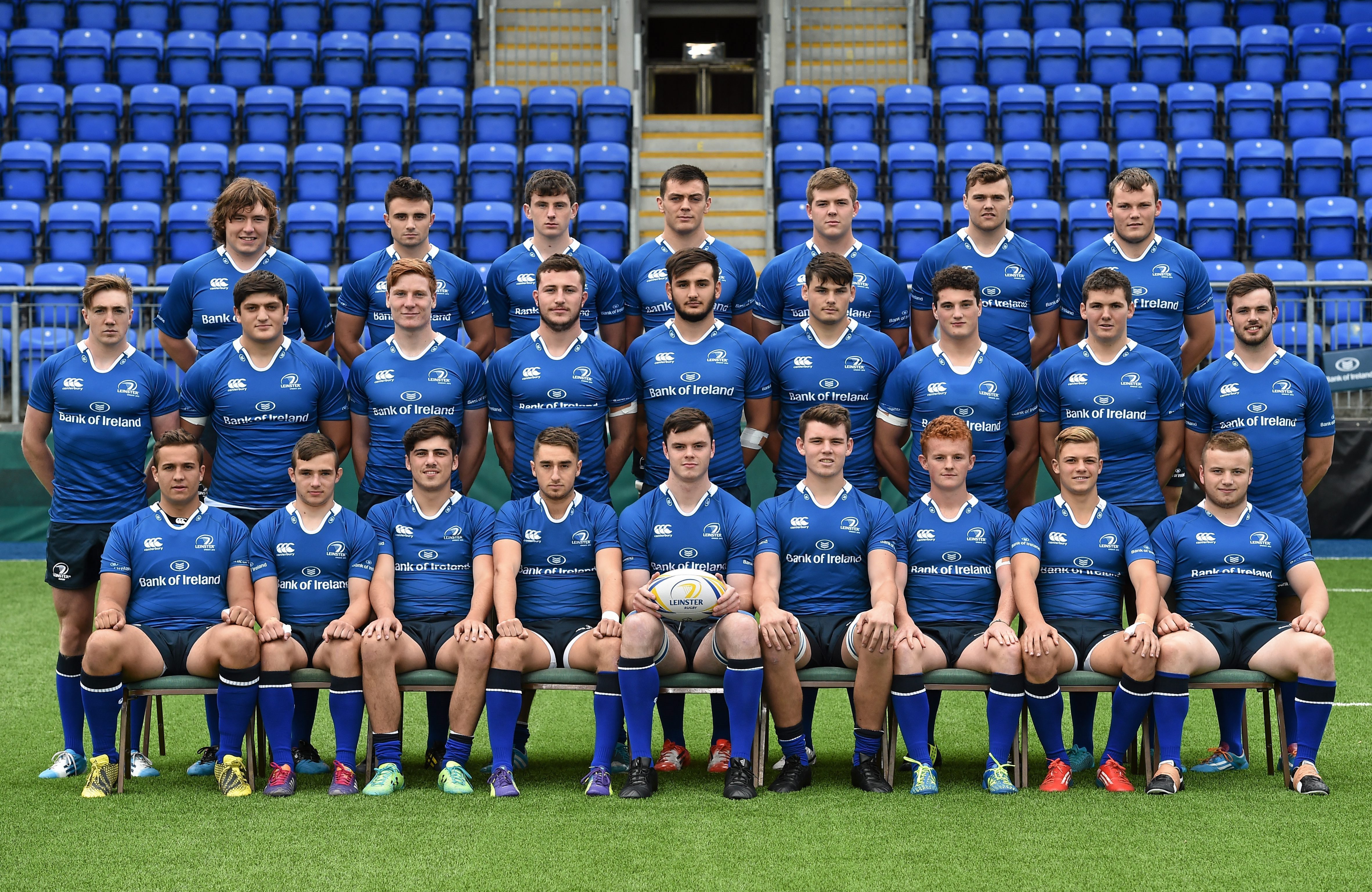 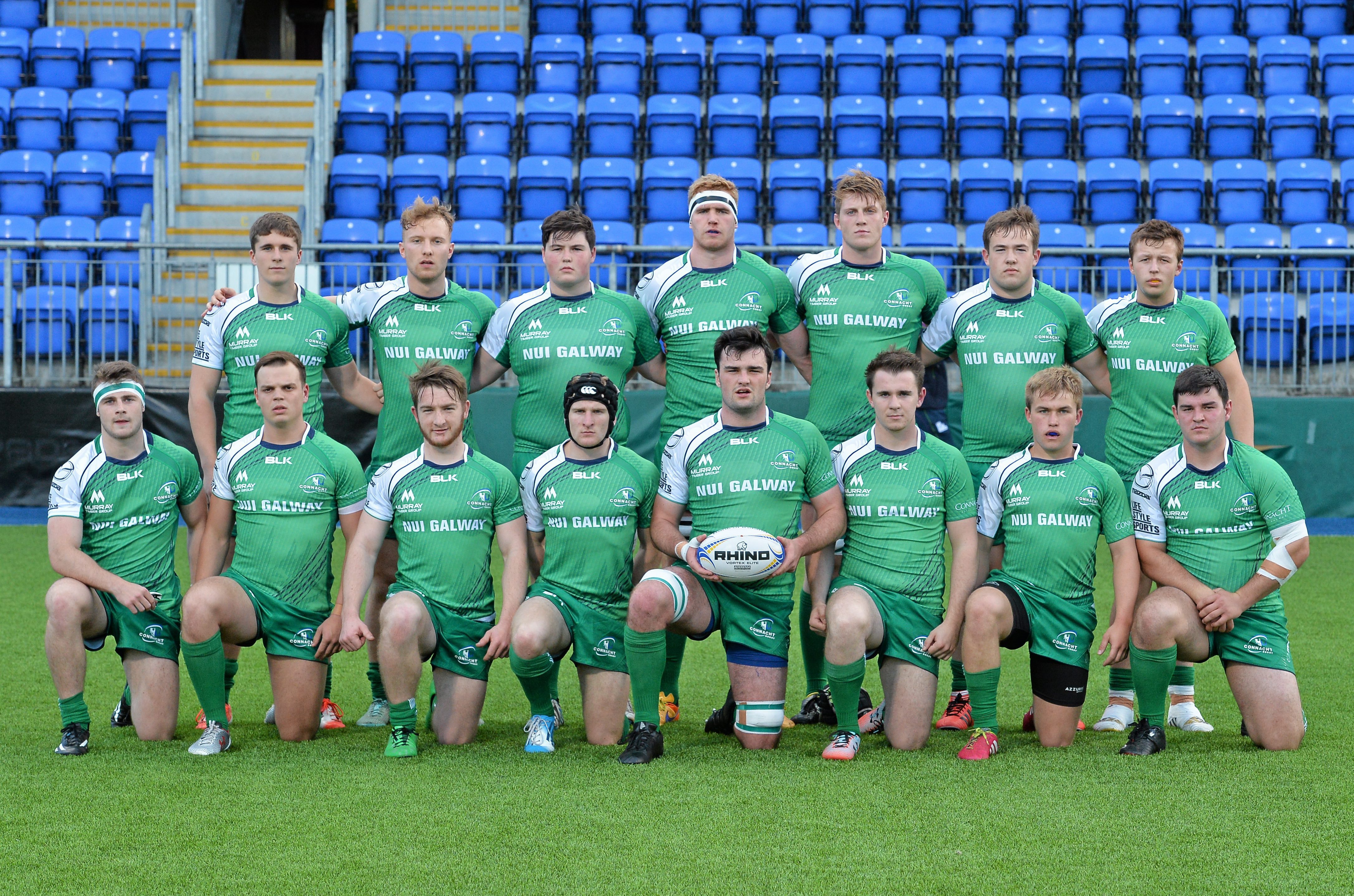