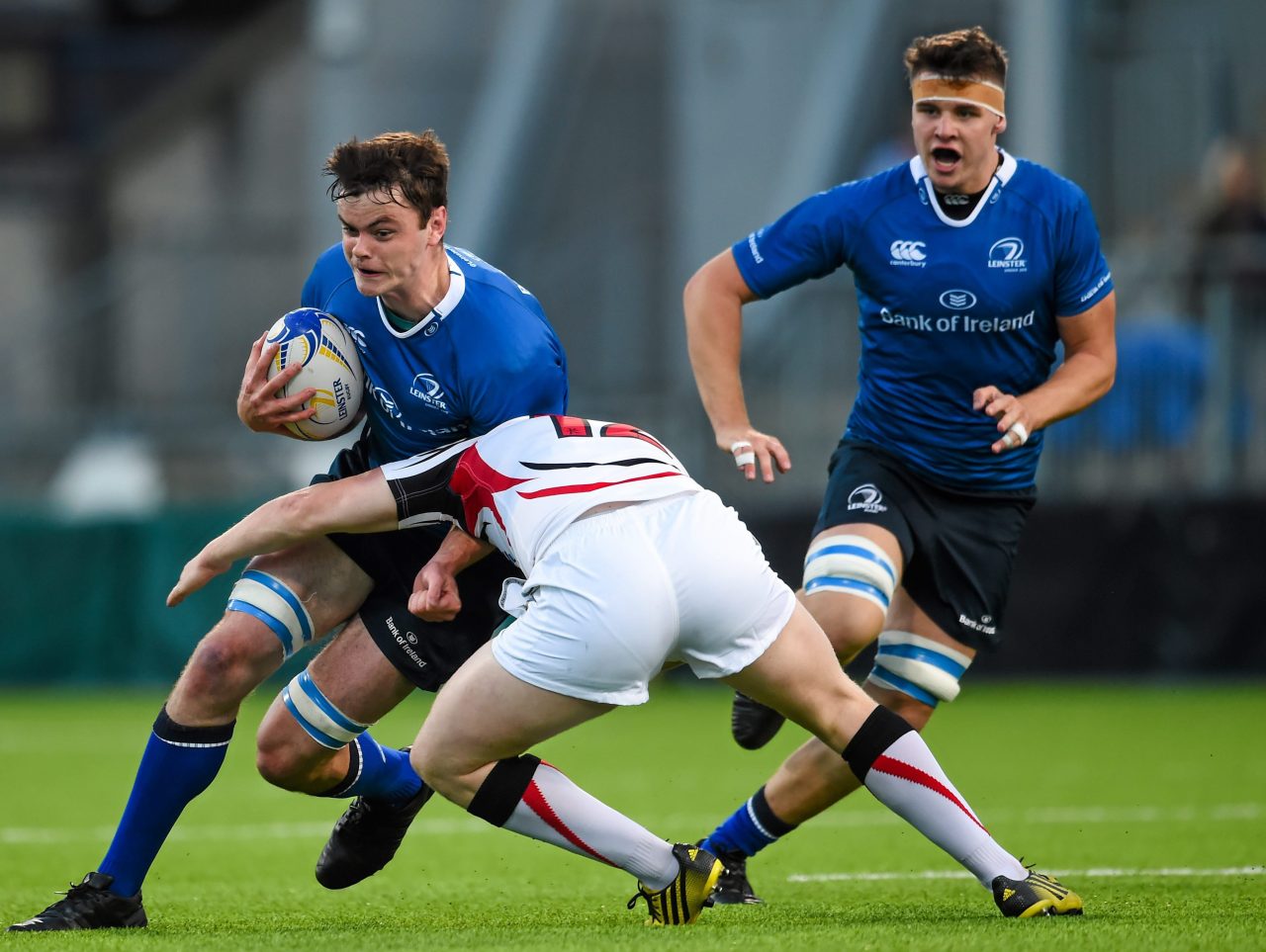 Hugh Hogan’s heroes well worth their 19-point victory over Ulster in the U20 Interprovincial Championship at Donnybrook on Friday night. Final score: Leinster 31, Ulster 12.

This was an exercise in bragging rights as both provinces were aware of Munster’s last minute win against Connacht earlier in the evening which meant the title moved south for the winter.

The tempo of Leinster and speed of the 3G pitch is what catches teams out. They went straight for ball off the top of the first lineout. That didn’t work.

Then, number eight Max Deegan and lock James Ryan hammered into tackles to force a penalty.

Ryan almost slipped through on the left; hooker Johnny Molony likewise. Centre Conor O’Brien found a gap only to lose the ball in contact.

The main positive was that Leinster were playing the game in the right area. Fly-half Matthew Gilsenan’s inside ball to left wing Hugo Keenan was a touch forward.

An indiscretion at a scrum offered Ulster time inside the 22. Prop Rory Squires rescued a misfiring lineout at the tail and centre Kieran Joyce made a dent through the middle.

Out-half Matthew McDowell opted for touch instead of points from a penalty. Lock Harry Clelland claimed it. The Leinster pack stayed down and scattered the maul.

Then, their scrum stepped forward to pressurise number eight Matthew Fisher and earn a penalty for Gilsenan to clear his lines.

Molony and flanker Will Connors were one connection away from being in business down the right. Centre Conor O’Brien came again, this time muscularly.

Captain Ryan was playing the part of the spoiler, seizing on a loose ball to hand Leinster momentum and a 5-metre lineout. Molony found Ryan in the air. The maul moved forward and Connors crashed over for a try, converted by Gilsenan for 7-0 in the 27th minute.

Their concentration flagged straight from the restart, giving away ground, relieved by Gilsenan’s sweet line kick.
Molony carried the ball into bodies and was held upright for a maul-into-scrum before Ulster centre Alex Kane tested Conor O’Brien on the outside.

Gilsenan and second row Michael Melia combined for a gain of thirty yards. The penalty came. The lineout was taken. The body positions were just right. The penalty try was awarded. Gilsenan converted for 14-0 in the 38th minute.

They were almost in again when Ulster full-back Robert Lyttle saved them ahead of Gilsenan shooting Leinster 17 points clear at the break.

The pressure valve was released. Full-back Jack Power and O’Brien offloaded accurately. Kane had to scurry across to keep Jimmy O’Brien at bay.

Their rhythm was interrupted by four successive penalties to Ulster. The fifth saw captain Ryan yellow carded in the 55th minute.

Ulster took advantage for their number eight Fisher to find a weak spot through the middle of a ruck with centre Joyce’s conversion making it 24-7 in the 57th minute.

Molony was left unattended at the back of a lineout to provide front-foot ball. Jimmy O’Brien got close to the line.

Prop Greg McGrath, Jimmy O’Brien and wing Matt Byrne come together for the latter to find Nick Peters with an inside pass and Tommy Whittle to convert in the 68th minute.

Ulster were forced to go from deep. They had limited success with Lyttle and Kane dangerous with ball in hand and Andrew McPhillips held his width to make the left corner.