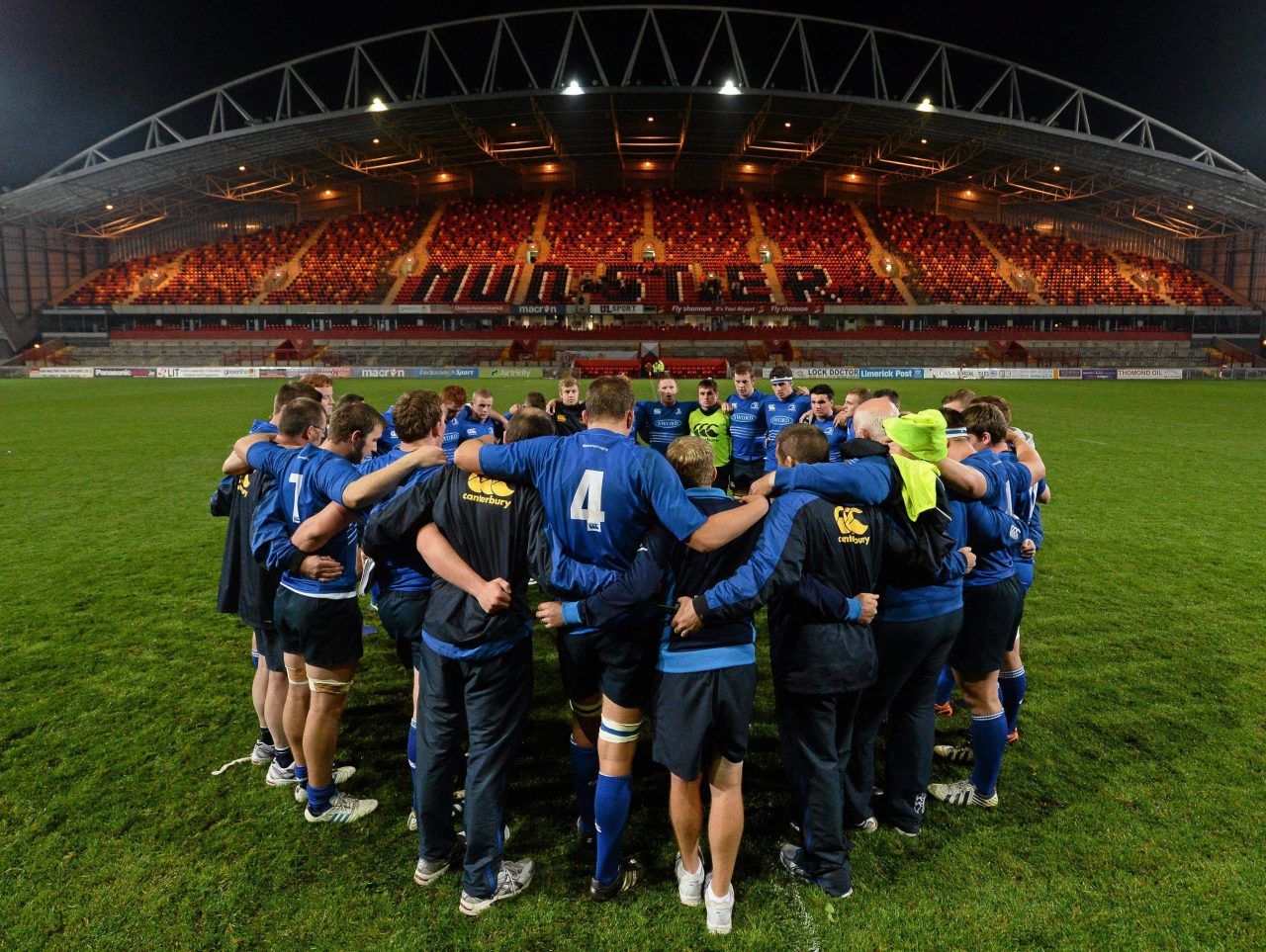 The Under-20 Interprovincial Series is set to begin on Friday night when a well-prepared Leinster will come head-to-head with old foes Munster under the floodlights out in Ashbourne, KO 7pm…

Leinster coach Wayne Mitchell will have to map out the three-match road without the services of a high quality quintet of Ireland internationals from the 2014 World Cup.

These boys in blue have already dealt impressively with The Exiles (64-10), an under-strength Leicester (48-7) and Italy (43-10) to put them in a confident frame of mind, albeit without the hard-nosed test they need.
“It has gone far too well from my liking in that we have not come under pressure in the same way that we expect to in the Interprovincial Championship,” said Team Manager Eddie Geraghty.

“If we go about our business the way we did against Leicester, we will be hard to beat. But, we’re not unbeatable”.

Leinster will look no further than Munster first time out. Charlie Rock and Joey Carbury could step into half-back for McCarthy and Byrne with schools sensation Jack Power, an injury doubt, lurking in the three-quarter line.
Centre Harrison Brewer is badly in need of rugby as injury destroyed his impact for the Ireland U20s last season and back rower Josh Murphy completes the set of seven back for the Ireland U20s in 2015. The forward pack is peppered with future prospects in props Jeremy Loughman and Andrew Porter as the three-quarter line is with centres Fergal Cleary and Conor O’Brien.

Peter Malone’s Munster haven’t been too slack in their preparations, losing out 19-13 to Clermont and edging out Leicester 26-17 at a tournament in France’s Massif Central last week.

They have a real gem at full-back in Stephen Fitzgerald, who made his senior debut in the pre-season set-to with Gloucester, as well as a gifted playmaker in Gearoid Lyons, possibly to be used in the centre, with Tomas Quinlan kicking well from fly-half and thoroughbred speed from former sprinter Greg O’Shea on the wing.
The question will be how much ball they can win and what they can do with it. For this purpose, there is considerable bulk in the form of Ireland U19 pair in hooker Sean McNulty and tight-head Mike O’Donnell.

Apparently, Ulster have been listed as joint-favourites with Leinster given they came within a whisker of turning a draw into a win down in Donnybrook last season with many of those back again at this Age Grade.
They certainly showed a weakness in defending the maul in a 27-24 defeat to London Irish at Sunbury last week, while also displaying resilience and creativity in putting the finishing touches to their preparations.
Number eight Lorcan Dow is a serious operator and narrowly missed out on the Ireland U20 World Cup squad to his provincial team-mate Frankie Taggart.

It all starts in the front row where Michael Lagan and Stephen Weir are no pushovers, continues through Ireland U19 second rows Josh Davidson and Alex Thompson as well as the support for Dow from Richard Todd, another international back rower.

This is all designed to provide the possession to the brains trust of Josh Bingham and Conor Young at half-back with wing Jack Owens a strong physical presence on the wing.

In addition, Ulster made a move for Connacht out-half Sean O’Hagan and he did not look out of his depth when replacing Ian Humphreys for the Northern Province against Leinster in the senior pre-season match at Tallaght last Saturday. It will be interesting to see where he will be employed at this level.

Sadly, Ireland U20 flanker Rory Moloney, their standard-setter in physicality, may be an injury cause for concern for The Westerners. It is their lack of resources that that are likely to work against them. It could also just come down to which province, most likely Leinster or Ulster, can cope best with the injuries that can undermine confidence.

Keep up to date with all domestic news on representative sides on twitter.