Leinster Under-19 and Under-20 sides win… 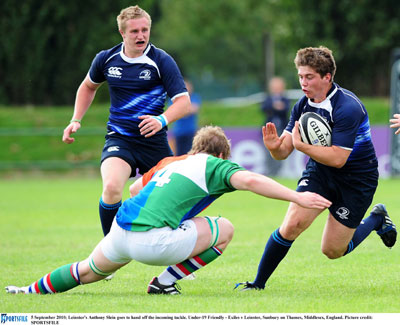 The Leinster Under-19 team, sponsored by SWORD Security, continued their preparations for the interprovincial series with a 20-17 victory over the Exiles in Sunday’s friendly in Sunbury…

The province scored three tries in total through second-row Tadgh Beirne and his back-row forward Patrick Lavelle, with Eoin Farrell sealing the victory with the province’s third try.

James Kelly added a penalty and a conversion as the visitors withstood late pressure to hold on to the victory.

Meanwhile, the Leinster Under-20’s, sponsored by SWORD Security, kicked off their defence of the interprovincial title with a fine 24-14 victory over Connacht in the Sportsgrounds, Galway on Friday evening.

The hosts started the game brightly and Niall Kenneally kicked the Westerners into a 16th minute 3-0 lead before Leinster rallied four minutes with a well-worked try from UCD hooker David Doyle.

Wing forward Patrick Dix touched down on 26 minutes after a good forward effort and his try was converted by Dundalk out-half Gearoid McDonald to extend Leinster’s advantage to 12-3. Kenneally kicked a 33rd minute penalty to reduce Leinster’s lead to six points at the interval.

The second half ebbed and flowed with neither side asserting themselves until Kenneally’s third successful penalty on the hour mark made it 12-9 and it was the spur the visitors needed as five minutes later a superb break by Sam Coghlan-Murray led to Eoin Joyce’s try.

Cathal Marsh was one of three substitutes for Leinster as they upped the ante and the St. Michael’s out-half’s creativity resulted in a fine solo try, which he also converted..

There was still time for Connacht to score an injury time try through Shane Laydon, but the visitors held on to seal a gritty win.

*Leinster Under-20’s next game is away to Ulster next Friday evening in Ravenhill (KO: 5pm).

Meanwhile, the Leinster Under-19 team, sponsored by SWORD Security, to face the Exiles in Sunday’s friendly in Sunbury (KO: 2.30pm) has been named.