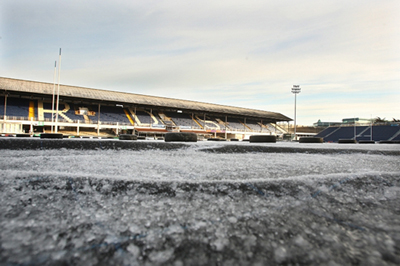 Following an inspection of the RDS this morning, tonight’s Magners League fixture between Leinster and the Glasgow Warriors has been postponed due to extreme and unprecedented conditions overnight and this morning…

Following health and safety advice and in consultation with match officials, as well as representatives from Leinster and Glasgow, the pitch was deemed unplayable by the STRI ‘The Sports Turf Institute’ – ground advisors for the RDS – following an 11am inspection.

Ground temperatures fell to -5 degrees overnight and a heavy frost set in which was followed by heavy snowfall early on Friday morning.

Leinster Chief Executive Mick Dawson said: ‘Unfortunately the pitch is unplayable despite a huge amount of effort made by the RDS ground-staff over the last week to get the game played. The weather just caught us out in the end because we were confident that it could go ahead up until yesterday evening

‘Following Garda and Health & Safety advice, we had to consider supporters travelling to the game from the far reaches of Leinster and beyond as well as the safety of the players as the roads and pathways around the ground are also treacherous.’

Leinster Coach Michael Cheika commented: ‘Obviously we’re disappointed that the game has been called off, but the weather overnight was too cold and there was no choice.

‘We would have liked to have played this game before the Brive game next weekend, without a doubt, but we’ll take the cards we’re dealt and we’ll get the best preparation possible underway ahead of that match.’

All tickets purchased for tonight’s game will be valid for the re-arranged fixture.