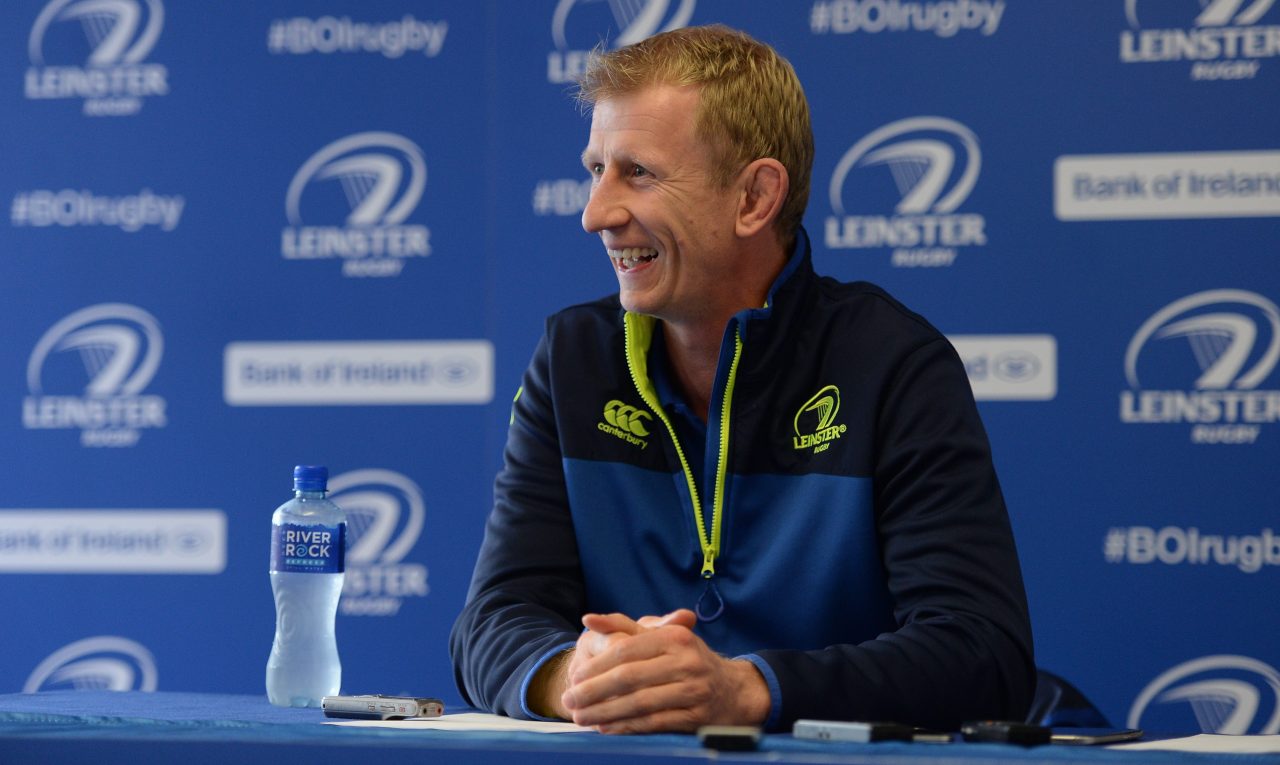 Leinster Rugby returned to the top of the Guinness PRO12 table on Saturday night with a 45-9, bonus point win over Scarlets at the RDS Arena.

Leinster led 12-9 at the break thanks to a two tries from Luke McGrath, with both sides having periods of dominance in the first half.

But it was Leinster who would prove to be the more clinical on the night with five second half tries from Rhys Ruddock, Joey Carbery (2), Ed Byrne and Jamison Gibson-Park sealing a precious win.

Speaking after the game, Leo Cullen said that the key to Leinster’s victory was that tight first 40 minutes, which wore Scarlets down for the second half.

“We felt that they were starting to tire just on half-time. The guys carried with a real intent. They said themselves at half-time, ‘make sure we keep winning the collisions’.

“[Scarlets back row] James Davies went off reasonably early in the second half as well and he is an ever-present threat at the ball, so obviously him not being there made a bit of a difference in terms of the speed of the ball as well.

“I thought our guys were more clinical in terms of taking the opportunities when they came. I think Scarlets did tire. A lot of that was due to the work we did in the first half.

“We knew Scarlets would go hard at the ball as well. There were a couple of times when they turned us over close to the try line. The messages at half-time from players and coaches was really just to make sure that we managed the conditions, played in the right areas.

“We knew opportunities would come off the back of good defence. That was particularly pleasing then holding them out at the end, and even getting that try at the very, very end was great. All in all, a very pleasing night’s work.”

The final try of the night came well after the 80 minutes had elapsed, but Leinster looked hungry to add to their points total. A product, Cullen said, of the hard work being put in on the training field.

“It’s great for them to come out, particularly at the RDS in front of your own crowd, and come up with big moments in games. You can see they’re out-lasting Scarlets there tonight, same here when they played against Edinburgh. A lot of that is due to the work on the training field. If you put in the work you get the rewards.” 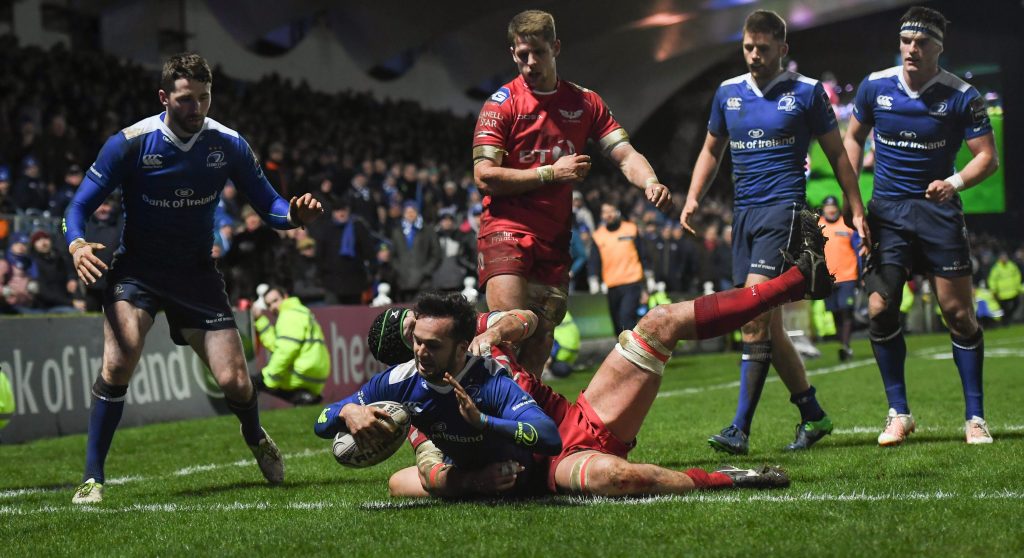 Of Leinster’s five second half tries, three were products of some pinpoint cross-field kicks from Ross Byrne.

The St Michael’s College man found Fergus McFadden once, in the build-up to Rhys Ruddock’s try, and Adam Byrne twice, as Leinster looked to turn the screw in the second half.

“The relationship with Ross and the wingers is really coming on,” Cullen said when asked about the out-half’s influence on the game.

“Scarlets were getting a little bit tight defensively, so the kick over to the winger, particularly over on Adam’s side of the field, got us a lot of really good rewards. Adam looked dangerous in the wide space as well. Really pinpoint kicking from Ross.”

Leinster’s sixth try came after Ross Byrne found Adam Byrne with a cross-field kick over on the right wing. Adam Byrne then found another Byrne, Ed, with an offload to send the prop over.

This was Ed Byrne’s first appearance at the RDS since spending 28 months on the sidelines with a serious knee injury, making his return to senior action for Leinster last weekend away to Dragons. 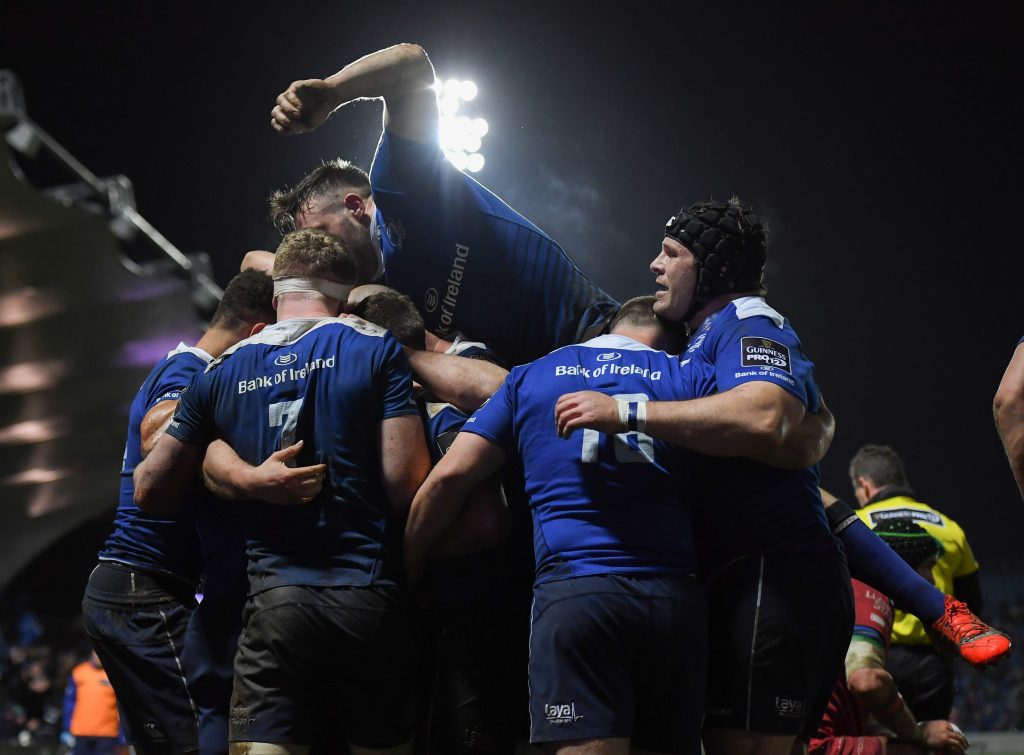 After the game, Cullen spoke about just what the Carlow man’s return meant.

“After last week, [Ed] was a very happy man in the dressing room. It was hard to top that, but he came pretty close tonight. You see the reaction from all his teammates and how highly he’s held in the group. It was a special moment for him.

“It’s a really, really positive step. He’s worked incredibly hard to get to this point. A lot of credit as well to the staff; strength and conditioning, physios, the work that they’ve put in to get Ed right, in particular [Leinster physio] Karl Denvir has done a huge amount of work with him. It’s fantastic to see.”