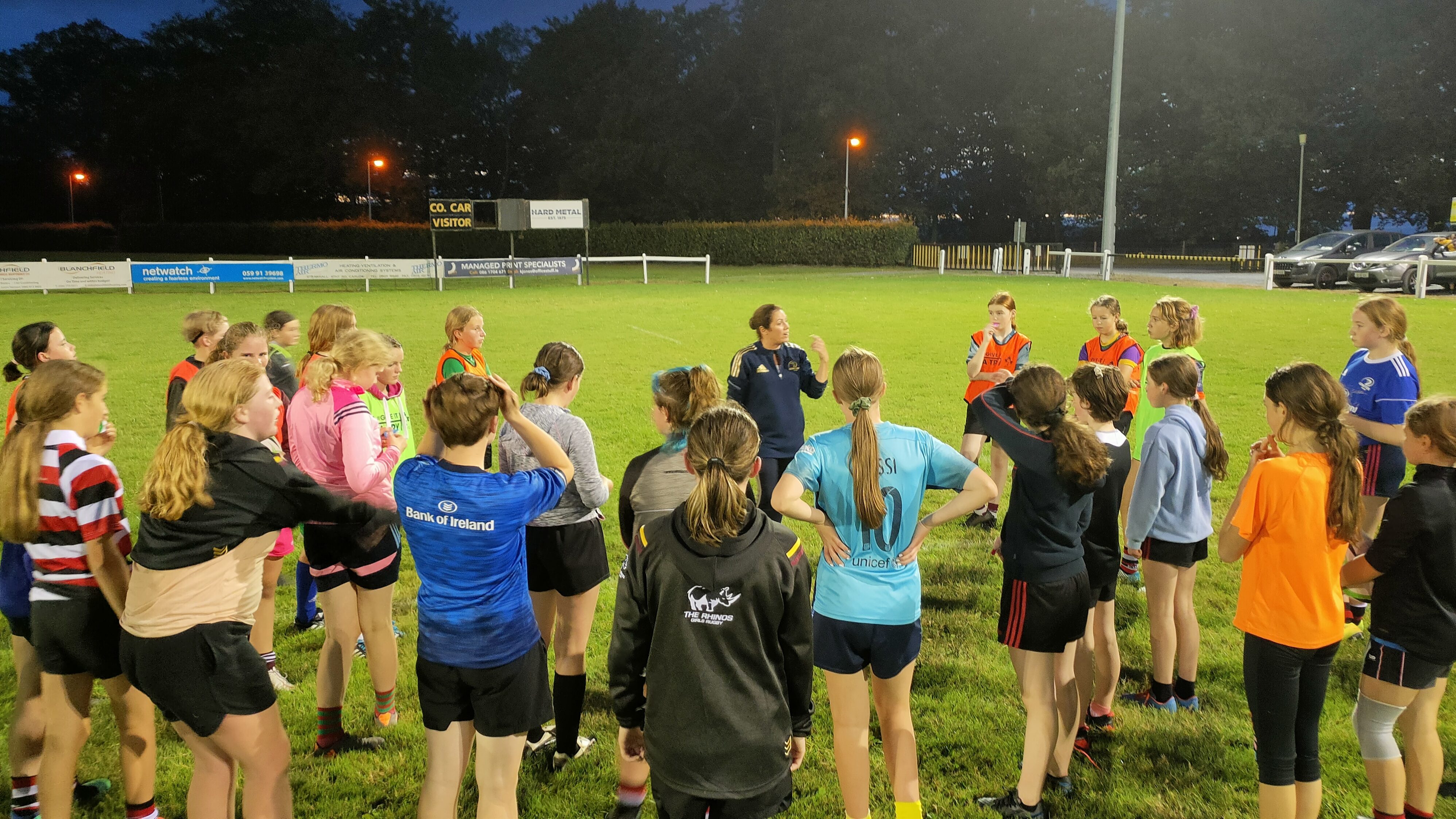 Coming off the back of a very interesting 18 months for female rugby the Leinster Rugby Women’s Development Officers (WDOs) are constantly innovating to adapt to the new situations they are facing.

After experiencing a huge uptake in girls rugby during 2020, while we were offering a non-contact form of the game, we now have new challenges in working with these girls to ensure their continued participation and enjoyment of the game as we try to merge back into playing regularly in competitive structures.

Player confidence is key and the WDOs have been running regional workshops to ensure that the girls have that, as well as the competence to be able to continue their rugby development in a safe and enjoyable manner.

Whilst participation is definitely still on the rise there are many clubs in their early stages of female rugby development with relatively small numbers training in U-8 to U-16 age groups, and community rugby is focusing on initiatives to keep them in the game.

Jennie Bagnall, Lead Women’s Development Officer said, “The U-14 age group where the girls are coming out of ‘mini rugby’ and playing on a full pitch in weekly competitive matches crucially needs support right now.

“The girls born in 2009 sadly missed most of the end of their ‘minis’ phase of rugby, due to COVID-19. Many clubs organised tours for this age group which encourage social interaction and would go a long way towards keeping them playing with their friends as they move into girls age grade rugby.

“Crossing over onto a full pitch rugby scenario can often be daunting for these players, and never more so than this season. All of our staff are working really hard to try to support clubs and coaches and provide opportunities for these players to be developed both in their confidence and competence on the field”.

One of these opportunities has been the running of regional ‘Match Workshops’ where girls from different clubs have come together to play non-competitive rugby. In September, the coaches from Kilkenny RFC, Enniscorthy RFC, and Tullow RFC brought their U-14 players to County Carlow FC to play in the first Match Preparation Workshop run by Leinster Rugby.

With over 30 players from the four clubs, after playing some fun warm up games and doing some individual ‘tackle tech’ for all the girls we were able to introduce the girls to their first official Branch Referee, Michael Carbury.

In a new development form of training match, Michael and the coaches were able to run a flexible game allowing on-pitch coaching and plenty of stoppages for the referee to explain to the girls what was happening and why – Michael commented that some adults that he referees don’t fully understand the game and that it was “fantastic to be able to teach these girls and help them learn and understand the game better at a young age”.

The South-East workshop was so well received that we weren’t even off the pitch before coaches and players were asking when we can get the girls together to play again, as their small individual club numbers meant that none of them had ever had the opportunity to play 13/15-a-side on a full pitch before and they absolutely loved it!

Ciara Kinch, an experienced coach and player from Tullow RFC whose own daughter Roisin plays in this age group commented, “The session with the Leinster Development Officers in Carlow was a great opportunity for all the girls to brush up on their rugby skills of tackling and evasion after the long break due to Covid-19. It didn’t matter what club you came from it was all just about the U-14 girls playing the game and having fun.”

Due to the success of this pilot workshop we decided to extend the initiative into other regions.

Mark McDonagh, an experienced Leinster Branch referee, managed the second part of the session once all the players were confident and coaches had signed off on their competence to play in a full-contact, full-pitch situation, and a fantastic 15-a-side match ensued.

Jojo Forde, coach of the U-14 girls in MU Barnhall explained how she felt the girls gained so much from the workshop.

“I loved to see the integration throughout all the play and how the more experienced girls also helped the inexperienced girls along the way. The girls really got the benefits of understanding more about rugby by the end of the session.”

With some of the more established teams beginning to get back to ‘normal’ by playing in regional and Leinster age grade competitions over the last few weeks, development initiatives like this are helping level the playing field and ensure all girls in all the clubs have maximum learning and development opportunities regardless of the size of their squads. Even for girls who have been playing for several years this type of non-competitive event is enjoyable.  Ella Keogh has been playing rugby with Newbridge RFC since she was seven years old. Even with this level of experience she said “I really enjoyed the session. I loved the teamwork building game and the tackle games that we played”.

Many years ago we used to see clubs run lots of ‘blitz’ events like this for small-sided teams to come together just to get game time, but as the club situation has developed we now have a large number of clubs with squads able to field full teams and play in competitions.

This is obviously fantastic, but as a section, Women’s rugby needs to keep running development workshops like this for clubs who are still trying to attract young players into the sport and ensure they all get to experience playing the full pitch game.

If you are interested in knowing more about rugby for girls or women, please contact your local Women’s Development Officer as detailed below: