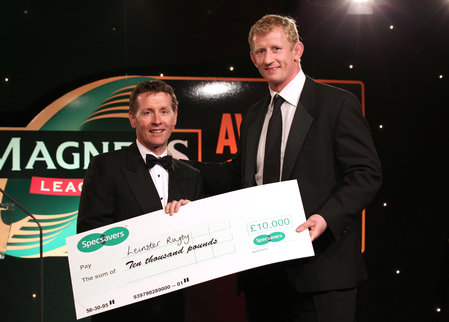 Leinster, who welcome Ulster to the RDS on Friday, 13 May for the first semi-final, left the Awards ceremony at the Carton House Hotel with the Specsavers Fairplay Award.

That title, which comes with a £10,000 prize to put towards youth development, is given to the team that gathers the fewest yellow and red cards over the 22 rounds of the regular season.

But there was also a major fillip for Ulster ahead of one of their biggest assignments of the season as South African recruit Ruan Pienaar was handed the top prize on the night after being voted ‘Players’ Player of the Season’.

Table topping Munster led the way as they won three major awards on the night, with head coach Tony McGahan collecting the Coach of the Season title from one of his predecessors, Irish coach Declan Kidney.

Ronan O’Gara won the Gilbert Golden Boot after emerging as the league’s most consistent marksman during the regular season, while Munster stalwart Alan Quinlan was named as the recipient of Andy Irvine’s ‘Chairman’s Award’ following his remarkable 15-year career.