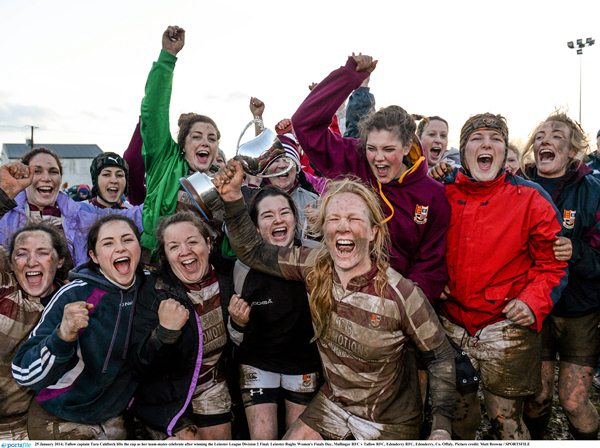 The Leinster League finals, hosted by Edenderry RFC, drew to a close on Saturday…

The journey has been hard fought, commencing in September, with teams putting themselves and their opponents to the test.

Despite four seasons gracing us with their presence throughout the day, Edenderry RFC, the extended rugby family and supporters all came to lend assistance on the big day, rallying around their teams. The thirst for silverware was ferocious and evident by the focus and determination painted onto the players’ faces.

The day kicked off at 12:30 with the Division 4 cup in the running for CYM and Old Belvedere J2 squads. Both teams have had a good season with few, if any defeats. CYM Terenure certainly looked the hungrier of the two sides on the day, winning opposing line outs, beating Old Belvedere at the breakdown and leading the charge with a converted intercept on the 22. Another unconverted try in the first half set CYM Terenure up for a defensive second half. Both teams rallied through the second half, putting in great tackles and contests, but the wet conditions underfoot and the slippery ball, resulted in no scores. CYM Terenure continued to attack until the final whistle and won the title of Division 4 champions. Final score CYM Terenure 12 – 0 Old Belvedere.

The Division 3 cup was an entertaining matchbetween neighbouring teams Arklow v Gorey. Experience won out in the end, with Gorey piping Arklow to the cup. The county had a win nonetheless and much credit was given to a relatively young and new side within the Gorey camp. Final score; Arklow 17, Gorey 5.

Division 2 proved to be the toughest match of the day for players, spectators and the referee alike. Mullingar and Tullow marched up and down the pitch really incorporating all that is good within the women’s’ game. Both teams drove hard, the number 8s pushing the pack forward and making great yards as well as freeing the ball amongst the backs. The punishing weather and muddy conditions meant the second half was more of a forwards game, keep the ball in tight, stretching spectator nerves even further; one mistake was all it was going to take.

As the Tullow Captain was stretchered off for a suspected shoulder injury the full time whistle blew, and 20minutes extra time played, resulting in no scores. The final was going to depend on penalty kicks from the 22. On the third kick, missing the conversion by a fraction, Tullow managed to outkick Mullingar and claimed the title. The game showed how much fitness, strength and passion each side had, and how they deserved to meet in the finals.

Old Belvedere managed to win out over Clondalkin in the Division 1, rallied on by their 16th player from the side-lines. The Old Belvo army succeeded in bringing home some silverware for their squads, beating Clondalkin by 10 points to nil.

Edenderry RFC truly pulled out all the stops making the Finals a pleasure to be a part of, for all involved. An abundance of food was on offer to everyone present on the day. Warm showers and immaculate facilities ensured everyone was accommodated and wanted for nothing.

The club house was warm and welcoming, generating a fantastic atmosphere, embracing all teams from near and far. The medal presentations recognised all players for their skill and performances. Herbalife sponsored the event and presented the Most Valuable Player awards to all four recipients. A huge congratulations once more to Brenda Healy of CYM, Anne Marie Burke of Arklow, Clodagh Cleary of Mullingar & Hannah Tyrell of Old Belvedere J1.

We’re looking forward to the upcoming Paul Flood and Paul Cusack Cup, where no doubt, some of these teams will meet each other again, some more eager than others to change the end result! Special thanks once again to Edenderry RFC, Leinster Womens Committee, Teams and travelling support.