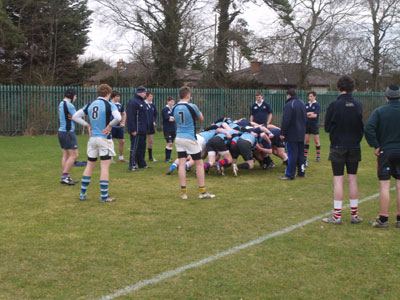 Players from five regions in Leinster North East, Metropolitan, Midlands, South East and North Midlands have been working with Branch coaches since last summer and these squads were trimmed down following the second of two round robin blitzes in January.

After a fluent warm up with Leinster Rugby CDO, Colin O’Hare, the forwards worked on scrums and lineouts with Reggie Corrigan and Declan O’Brien while the backs were examined on their handling, tackling and decision making in a series of drills orchestrated by Wayne Mitchell and Dan Van Zyl. We are looking at their functional ability in various settings explained one of the coaches involved.

Following the drills the players were put in a match of three 20 minute periods, again under the scrutiny of the coaches plus Gerry Murphy and Colin McEntee, Leinster Academy manager.

Following the on-field activities the coaches met and trimmed the group to 35. However, so impressive have some of the Under-16 players been in their development squads that 10 of them have also been invited to the final selection event in April.