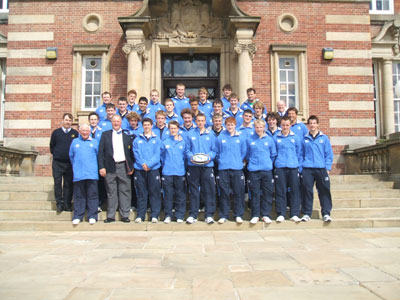 Leinster U/18s started a busy few days last Wednesday with a game against Languadoc in Donnybrook.

Leinster got off to the perfect start when centre Thomas Daly crossed over for the opening score following a flowing move. The try was converted by outhalf Liam Bourke and although Languadoc hit back with two penalties Leinster boys went to the break leading 7-6.

The second half started well when Liam Bourke extended the Leinster lead with a penalty. That was to be Leinster’s last score and as Languadoc made some key substitutions they slowly began to take control. Their domination was rewarded with two late converted tries which saw them run out winners.

Leinster U/18s travelled to Leeds on Thursday for the now annual encounter with Yorkshire U/18s. With Thursday afternoon and Friday to spend on the training pitch coaches Eric Miller and Dan van Zyl had time to do some very valuable work with the players.

Leinster took on Yorkshire at the excellent facilities of Leeds Grammer School. Leinster played into a strong wind in the first-half and despite conceding a number of penalties in kickable positions neither side registered a score.

Leinster re-started the strongest and were ahead after just three minutes when outhalf Liam Burke converted a penalty from the Yorkshire 22. Burke doubled the lead 15 minutes later with another excellently struck penalty.

Yorkshire introduced a number of replacements that spurred the English side into action and they struck back immediately with a penalty and then went ahead with a well worked try which they failed to convert.

Unlike the Languadoc game Leinster battled back and finished the strongest. With two minutes remaining the faultless Liam Bourke won the game for the visitors with his third penalty. This was just reward for a great display and testement to the work done on the training pitch.

Leinster used their full panel of 26 players in both games with centre Thomas Daly the only casualty of the the few days.