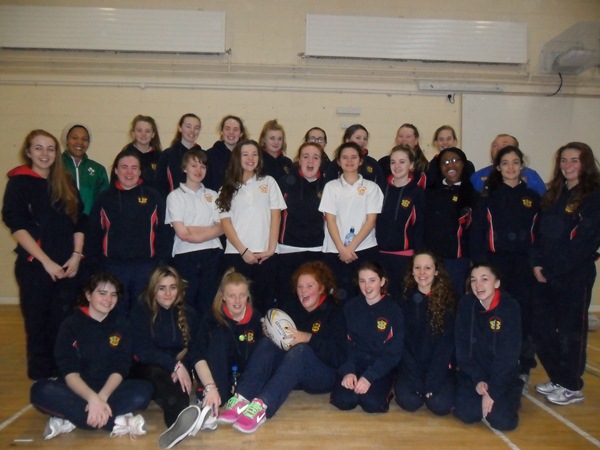 The 25 students have been put through a four week tag rugby programme overseen by Leinster CCRO Scott Broughton which culminated in the visit of Sophie. The session started with Scott putting the girls through some warm-up games with valuable input from Sophie then on to some skill drills and finally 5 v 5 tag rugby matches.

Sophie was very impressed by the girl’s enthusiasm and willingness to take on board the feedback she was giving them. After the indoor session the girls quizzed Sophie on how she got into rugby and many other aspects of playing rugby including injuries, diet and travelling. The girls were genuinely interested in what Sophie had to say and left thrilled that she had taken time to come and in impart some of her knowledge on to them.

Teacher Donna Graham was also delighted “that was brilliant, the girls really enjoyed it and Sophie was excellent’ said Donna.

Hopefully this experience might lead to Loretto Girls College having an international of their own one day.