Lewis and Rolland shine at ‘Meet the Refs’ night… 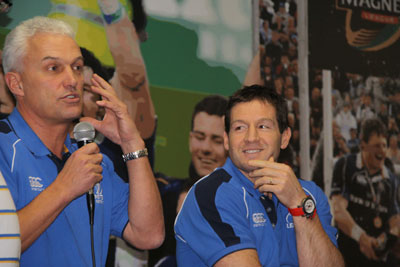 Rugby Union should be careful to remember its origins and treasure the fact that it is a sport for players of all sizes. This was the view of Leinster referee Alan Lewis who was speaking at the OLSC’s meet the refs night in the RDS on Thursday night in the ‘The Laighin Out’ Bar…

“It is a game for all shapes and sizes where you can see an 11-stone guy humiliate an 18-stone guy and we need to hang on to that,” said Lewis, who was referring to recent changes in the game, some of which he thought were positive but others less so.

Speaking on the slower setting of the scrums referee of the last World Cup Final, Alain Rolland said that he would favour a three-step call of ‘crouch, touch engage’ as he felt things worked better in a rhythm of threes, such as ‘ready, steady go’.

Both referees added that they hadn’t felt that the tinkering with the scrum was entirely necessary as it “wasn’t broke” to begin with.

Rolland, a former Leinster and Ireland scrum-half, had the audience gasping when he explained the amount of gym work and general fitness training he would get through in an average week, which included weights, running and cycling. Lewis, also a former sportsman having represented Ireland in cricket more than 120 times, explained, with a wink, that he liked to spend a little more time at home and typically would not spend as much time as Alain in the gym.

Lewis said that he felt referees in this part of the world are lucky to be part of the Heineken Cup. “We are the envy of the world to have what we have; the colour, the stadiums and the passion,” he said, adding that some Heineken Cup matches were played at greater intensity than some test matches.

Both referees reminisced about their favourite matches and times where things went wrong on the pitch and mistakes were made. They both agreed that mistakes are made as the human aspect comes into play but that you just hope “the mistake is not the difference between a team winning or losing”.

When asked if they felt rugby could learn from other sports or that other sports could learn from rugby, Rolland said that the back-up to on-pitch discipline was a substantial bonus in rugby, as he could see an incident of foul play and give a yellow card when the player really deserved a red and then that player would be subsequently cited and banned. He added the caveat however that rugby still had a fair way to go in terms of establishing consistency in the lengths of bans internationally.

Lewis said that football referees had commented to him that he was lucky to have the respect of the players, to which he would reply that respect had to be earned. Citing the example in football of Pierluigi Collina, who commanded respect on the pitch, he said that body language and facial expression have a role to play in the officiating of any sport. Alain Rolland added that his wife wanted to know how he could control the All Blacks but not his children!

In all it was a most entertaining night for all present.

A photo gallery from the night can be found HERE

If you want to find out more about becoming a referee, you can access further information on www.arlb.ie