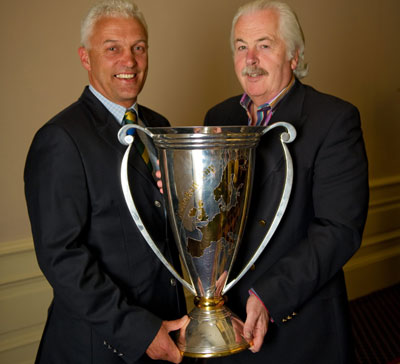 At the Leinster Branch AGM held on the 26th May in the Burlington Hotel, Kevin Fitzpatrick President made a presentation on behalf of Leinster Rugby to Alan Lewis to mark his retirement from refereeing…

The large attendance gave Alan a standing ovation and words of thanks and acknowledgement of Alan’s contribution to both International and national refereeing were delivered by Des Lamont (Chairman Professional Game Committee Leinster Branch) – himself a former senior referee.

Alan thanked all present for the accolade that the Branch had bestowed on him and said he had, “…enjoyed every minute of his career there were highs and lows and that he had made lifetime friends.”

The disappointment of the Rugby World Cup was behind him and “…life moves on” he informed the attendance that while the World Cup is on in New Zealand he will be getting a nice suntan and having a few cocktails in Bermuda where he has been invited to referee in the Bermuda Classics!