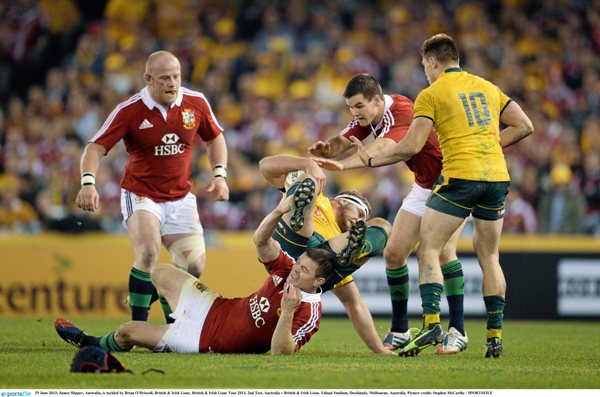 O’Brien was a second half replacement for his provincial colleague Jamie Heaslip in a match which saw two other Leinster players – the defensively excellent Brian O’Driscoll and Racing-Metro 92 bound out-half Jonathan Sexton – feature.

O’Driscoll remains confident he can add a Lions series triumph to the host of domestic and international honours he has already won in a glittering career.

‘We’re very disappointed, we were six points clear – that’s a horrible margin as after a converted try you’re behind,’ said the 34-year-old.

‘I had one loose kick that gave them a counter-attack option, but we weren’t able to close it out. But it’s not over, we’ve got a massive week to get ourselves ready for Sydney next Saturday. The momentum is with them, but we won’t let that faze us. We’ve beaten them once.’

For the second week in a row the outcome hinged on the final kick, with Cardiff Blues full-back Leigh Halfpenny falling short with a penalty from halfway.

The Welshman’s five penalties had seen the Lions lead 15-9 until five minutes from time.

But Wallabies centre Adam Ashley-Cooper crashed over for the only try, and Christian Leali’ifano held his nerve to land the conversion.