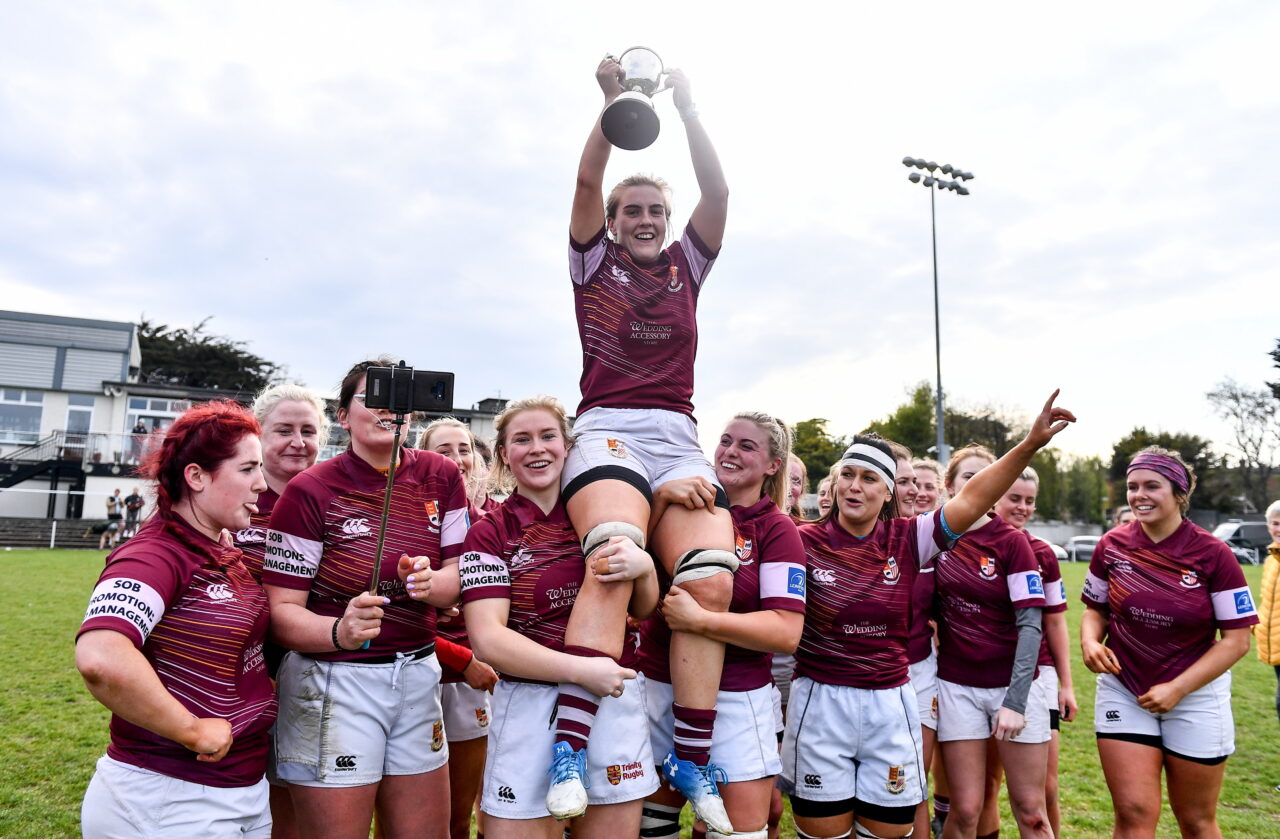 In a game that was a superb advertisement for women’s rugby, Tullow centre Chloe Farrell’s hat-trick drove Tullow to the Paul Flood Cup.

Tullamore were first to have their hands on the ball, alternating runners between backs and forwards, No 8 Emer Feighery and out-half Emma Kelly setting the tone in attack.

It took Tullow some time to find their feet, Alex O’Brien took up the challenge by busting out a 40-metre break and an offload in the image of her brother Sean.

The 10-12 axis from Catherine Dempsey to Dannah O’Brien looked sharp and they almost put Farrell through a hole and O’Brien was held up short by resilient defence.

Feighery’s presence on the ball and Kelly’s thoughtful kicking game were both good for a gain of ground.

But, pure class from Dannah O’Brien’s outside break and the drawing in of Sinead Rigney gave the speedy Dempsey a clear run-in after 19 minutes.

As Tullamore probed along the line, the ball went to ground and centre Farrell was in, like a flash, to speed away for the second try, converted by Dempsey for 12-0 in the 22nd minute.

Scrum-half Jane Waters was quick to snatch a turnover and showed a speedy service from the base to get Tullamore moving forward.

The blasting work of Alex O’Brien was supplemented by a twitchy backline in which Dannah O’Brien showed the touch of a genius at work with a blind-pass that sent Farrell in for her second try in the 29th minute.

Out-half Kelly used grubber kicks to get in behind and full-back Rigney smartly released Kate McCann for a well-taken try for Tullamore.

They narrowed the gap again when moving left for wing Caroline Aherne to burst through on the left for 17-10 at the break.

The way in which Tullamore came back into the game suggested they were in a groove.

However, Tullow used the interval to reset and struck when centre Farrell’s footwork and acceleration turned a promising position into a try which Dempsey converted for 24-10 in the 46th minute.

Now two scores clear, Tullow must have been cognisant of Tullamore’s capacity for striking quickly, Dempsey taking the points on offer in the 69th minute.

True to form, Tullamore never dropped the heads, playing to their standards rather than the scoreboard.

This was rewarded when blindside Ciara Farrell broke through for a try, converted by Kim Cobbe in the 73rd minute.

A supremely confident Blackrock used a stunning attack and a watertight defence to overcome Balbriggan in the Paul Flood Plate final.

Andrea Murphy led the way with four tries with Ray Lawless weighing in with a hat-trick from their 10 tries.

Blackrock camped out in the opposing half, sending runners in waves against a Balbriggan defence well-marshalled by centres Dearbhla Sheridan and Gemma Kerrigan.

However, the constant pressure had to tell, Roisin Crowe’s knife-through-butter break creating the opening for Adele Leogue to ghost into the right corner. 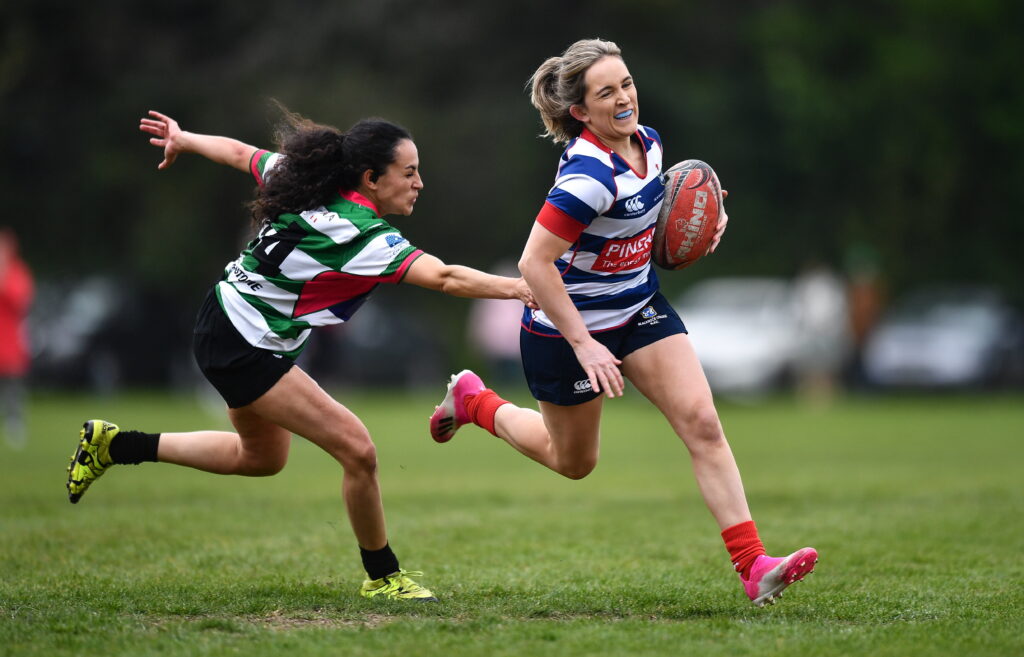 A similar story evolved from wing Mairead Ni Chathasaigh’s incision for full-back Lawless to finish in impressive fashion for 10-0 in the 23rd minute.

Really, the challenge for Blackrock was to stand up to an impressive Balbriggan pack of forwards in which loose forwards Therese Tomey and Eadaoin Cannon were to the fore.

But, replacement Murphy punched in back-to-back tries and the fast feet of Crowe accounted for the fifth to end the half 25-0 ahead.

Balbriggan captain Stephanie Campbell was quick to carry the fight, the hooker always looking for work with and without the ball.

Still, the avalanche of ball coming at the north Dublin club led to tiring bodies, no matter how full-back Laura Brown, flanker Loran McKenna and scrum-half Giorgia Tanner tried to stem the tide.

Lawless and prop Ann Marie Rooney’s tries were both converted by Laura Delaney to stretch the lead out to 39 points.

Still, Balbriggan kept their heads up, making ‘Rock work for every advantage, Lawless completing her hat-trick before Murphy added her third and fourth of the afternoon.

Third-quarter tries from Emily McKeown and Sheena Hubbard gave Naas the cushion they needed to hold Wicklow at bay in the Paul Cusack Cup final.

There was serious intensity from the get-go as McKeown tested the defence of Saoirse O’Reilly and Naas sent No 8 Mary Healy and centre Amy Horan up the guts.

Wicklow held the line, administered the tackles and relied on Nicole Humby to kick them out of trouble.

The commitment to keep the ball in-hand was oiled by the decision-making of Sheena Hubbard and a sweet line by flanker Ruth Campbell for the first try in the 10th minute.

Hubbard twice intervened and Healy weaved for 20 metres when the ball went astray and Wicklow wing O’Reilly picked off the ball to accelerate away for a try she converted too for 7-5 in the 16th minute.

The lead changed hands again when Healy used a solid scrum to power away from tackles on the way to the posts, Clare Finn converting for 12-7 in the 27th minute.

A kick over the top by Humby allowed Naoise O’Reilly to put on the after-burners, expertly grabbing the bouncing ball to scoot home, Saoirse O’Reilly converting for 14-12 in the 34th minute.

The electric Naoise O’Reilly was away again from smart passing on the inside. This time, full-back Zoe Dunbar snapped into the tackle.

Tremendous continuity by Naas, started and finished by Healy, from just outside the 22 produced the try of the game for Finn to kick the extras for 19-14 at the break.

The variety to Hubbard’s kicks was countered by Humby seeking out the touchline, perhaps to slow the pace of the game. 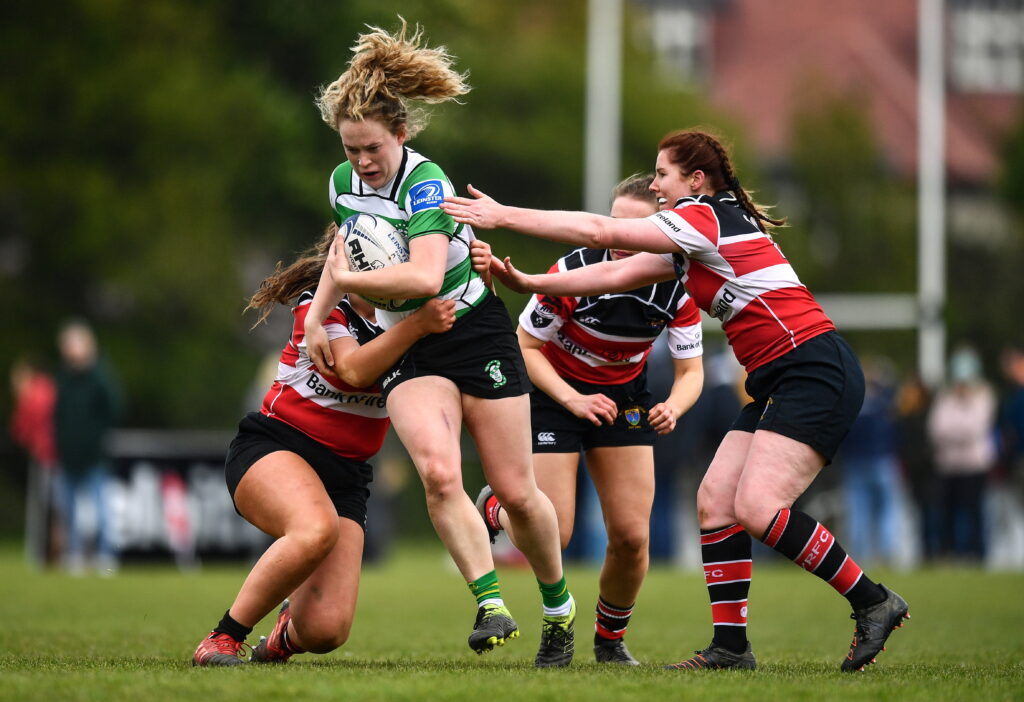 It didn’t work well enough to prevent Naas from surging up the left where McKeown had the pace and power to make the line for 24-14 in the 48th minute.

The tide of possession was going with Naas, Healy causing havoc and right-wing Laura Power unable to take the final pass.

Soon enough, they were on the front foot again, Healy and Campbell taking the ball on and Hubbard getting the final touch for 29-14 in the 59th minute.

Wicklow hooker Maya McDevitt and Becky Condron were not content to sit back, coming forward on the ball.

They came left for the backs to work the ball into the hands of Faye O’Neill, who had the presence of mind to fend and stride to the line in the 73rd minute.

It was give and take as Healy powered over for Finn to add two on top before Wicklow had the last say from Aoife Dunne’s injury-time try.

The pack power of Portlaoise was decisive in subduing Wanderers in the Paul Cusack Plate final.

The Laois club pushed the pace in the opening quarter, using their forwards to apply pressure on the fringes.

The reward of penalties led to an attacking lineout deep inside Wanderers 22, the maul turning position into points, Steph Gleeson touching down for 5-0 in the 15th minute.

Tactical kicking by captain Amy O’Callaghan maintained an edge in territory and the scrum was also in control through the drive of the front row of Jorja Mullen, Steph Gleeson and Rosie Palmer.

Wanderers half-backs Jess Kickham and Nicole Landy were keen to bring their backs into the game.

It was soon apparent why as Alais Diebold shot up the left-wing as a warning sign that was not heeded.

The next time the ball was moved, centre Diebold had the pace to round the defence for a stunning try, loosehead Pia Kraymer converting in the 24th minute. 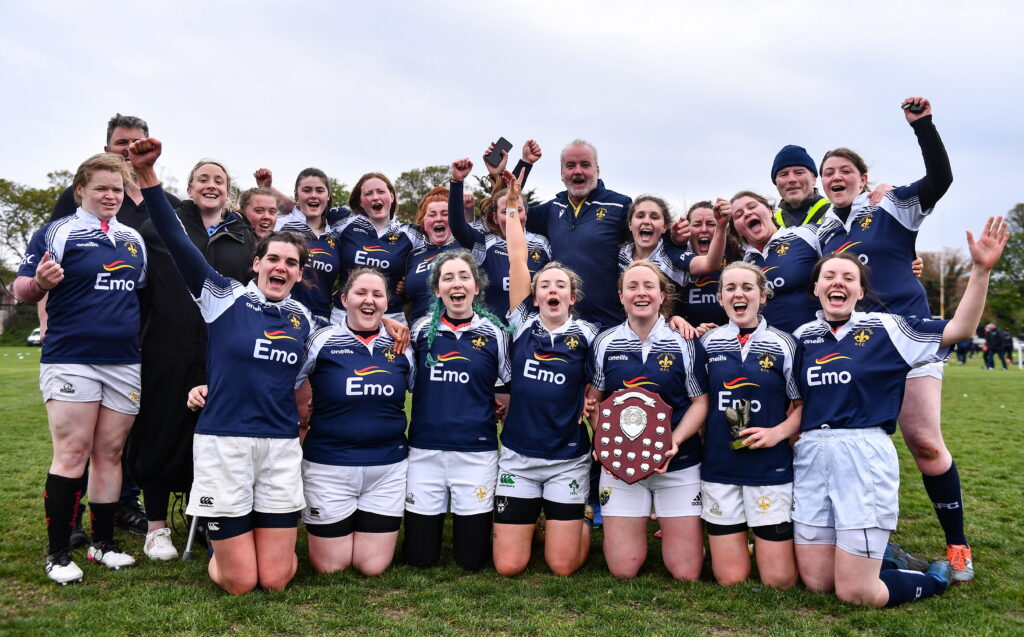 A half-break by O’Callaghan was the basis for scrum-half Rachel Murphy to crash over for Jenny Keegan to convert for 12-7.

The greater weight of pressure was being applied by the Portlaoise pack, forcing a penalty from Keegan for 15-7 to close the half.

Portlaoise stitched a fine attack together, Denica McGrath, Gleeson, O’Callaghan and Becca Mullen all involved in Rosie Palmer’s try, converted by Keegan for 22-7 in the 55th minute.

The Wanderers reaction to this adversity was positive, using far less ball to good effect, scrum-half Kickham getting over for Palmer to convert for 22-14 in the 70th minute.

They grew stronger, moving deep into the 22, pushing the pace all the way to the end without ever managing to breach a disciplined defence.

A hat-trick by captain Emer Kelly meant Kilkenny’s name was etched into the record books as the inaugural winners of the Leinster League Division 5 final.

These two showed no signs of sluggishness from the mid-morning kick-off, even though nerves played a part in a shaky opening quarter.

It was understandable as both sets of players looked to settle into simple patterns, Kilkenny moving the ball into space, while Tallaght preferred a more direct avenue.

The mistakes and errors gradually gave way to a better flow, beginning with Kilkenny’s insistence on delivering a try by No 8 Lieke Holden in the left corner.

It was the signal for Kilkenny to move into overdrive, Kelly freewheeling down the left for a superb individual try which was quickly followed by a similar effort from left-wing Lucy Harte, the latter converting both for 19-0 in the 37th minute.

However, Tallaght were driven on by Louise Leonard and scrum-half Eileen Shanahan before flanker Martina Fitzpatrick twisted to the line for Grainne Flood to convert for 19-7 at the break.

The second period sprang into life a lot sooner as Kilkenny took advantage of the binning of Leonard for captain Kelly to sprint around the outside of the defence, Harte’s conversion making it 26-7 in the 52nd minute. 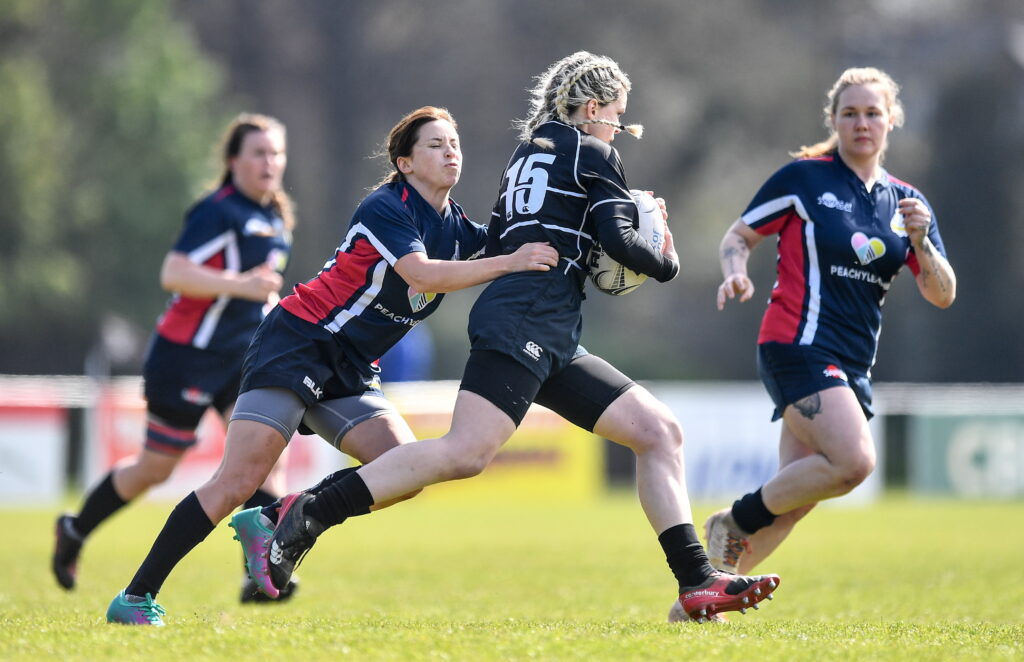 Soon, Tallaght were peppering the line with one-out runners until out-half Grainne Flood put centre Chloe Conroy-Kearns over on the left for Flood to convert for 26-14 in the 56th minute.

The ensuing stalemate centred around uncompromising defence as tackles stuck until Kelly spotted a hole in midfield and was quickly through to the posts for Harte to convert, essentially sealing the issue.