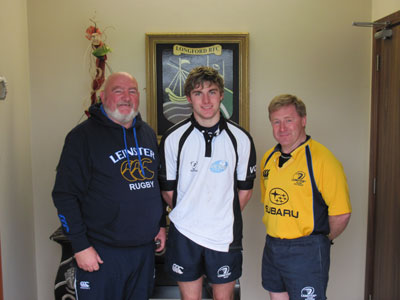 Longford Rugby Club is currently having a very successful year, with our Ladies, Mens, Youths and Mini sections – where numbers are increasing every year…

It just goes to show how popular the sport of rugby has become, whether its rugby or tag rugby.

Our main focus is to foster and develop the team skills of every mini player and youth player. We operate a strict policy of inclusion to ensure that every player plays on match days. This has been the key to our rapid expansion over the last number of years and one that we are proud of and keen to develop even further.

We have our new Club Community Rugby Officer (CCRO), Stephen Coy Jnr, visiting all of the schools working with players and school development teams. Both Moyne Community School and St Mel’s College are taking part in the development shield. St Mel’s won through to the final last year only to be beaten in the last minute of the game by Malahide Community School. Three new schools have come on board playing rugby, namely Cnoc Mhuire Granard, Ardscoil Phadraig Granard and Scoil Mhuire Longford in the ladies section. A lot of time goes into teaching the basic skills of rugby by Stephen Coy Jnr and Steve Coy Snr, who now looks after the Midlands region and also the North-East region.

Our U-6s travelled away this year the first time to a blitz in Mullingar playing Leprechaun rugby. The U-12 squad represented us on the national stage by playing at half-time during the Leinster v Edinburgh match in October and their great day was topped off by meeting Malcolm O’Kelly and Alan Quinlan. Captain Brian Hanley had his arm signed by Alan Quinlan, which brought much laughter from the large crowd, in our newly developed Sin Bin Restaurant and Event centre.

At present three of our teams have qualified for the quarter finals in there respective divisions at U-13, U-17 and U-19 which is great progression for our coaches and players. Nine representatives from that U-17 panel took part in the inter-area Shane Horgan Competition, which was trained by Derek Maybury and Steve Coy. They went on to clinch the Shane Horgan Trophy for the first time ever. Longford is going from strength to strength with the mini and youth players. Already this season, we have representatives going on for selection to the midland team, hoping to defend for Shane Horgan Trophy.

Our club was represented by one of our youths in the Leinster interprovincial U-18 Club Youths this season. It was a tremendous achievement for Finbarr McGowan. He was in the starting squad for all matches and his time and dedication could be seen by all.

With our newly developed clubhouse, we are now able to host visiting teams from the rest of the Leinster province, as far away as Dundalk and down as far as Wexford. One thing that has to be mentioned is the great work done by parents within the club. Helping out, whether it is with stewarding, making sandwiches/tea/coffee, supporting the players, driving players to training, it is all hugely appreciated. Our club would not be so successful without all of your help.

We also hosted our Leinster Summer Camp in late August where players from ages 6-12 took part. Players met three of the Ireland U-20 squad; Martin Moran, David Doyle and Andrew Mortimer. A note worth mentioning is that Andrew was on the Leinster U-18 Club/Youths team along with Longford players, Derek Farrell and Robert Kennedy. Robert was selected for the Ireland U-18 Club/Youths team two seasons ago. Andrew went on the make history by scoring a hat-trick of tries in the first match played in the new Aviva stadium. It was great that all of the Mini Summer camp remembered him at their first training session a week later. This is one young player everyone should keep a very close eye to see will he be one of our future Ireland internationals.

Anyone wanting to make enquires about Mini Rugby (U-6 to U-12) or Youths Rugby (U-13 to U-19), whether you are U-6 or U-16, it’s never too late to take up rugby as a sport, as has been proved in the past three in Longford RFC where a player started playing at sixteen years old, had never played before, and then when on to represent Longford RFC at U-18 Leinster Youths and Ireland U-18 Club Youths teams and played in The Fira-Aer European Championships in Treviso, Italy.

Anyone wishing to join Longford mini or youths, please contact Mini & Youth coordinator, Maria Keelty on 086-0808111. To join as a senior player or women’s player, check out our club site: www.longfordrugby.com or e-mail our club secretary, Tommy Butler at admin@longfordrugby.com