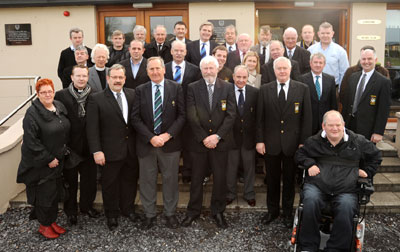 The extension and refurbishment of the building cost in the region of €;500,000 and was carried out with support of the National Lottery and Longford Community Resources Ltd.

The fit-out of the Derek Belton Gym was funded due to the hard work and generous contributions by the friends and family of Derek Belton and was also supported by O2.

On hand to officially open the refurbished Longford RFC clubhouse was IRFU President Caleb Powell, while members of the Belton family performed the official opening of the Derek Belton Gym.

Club President, Martin Maguire, speaking at the launch in the club’s Sin Bin Event Centre, paid tribute to those who had the foresight to develop the club at every opportunity.

“Longford RFC always was and still is a progressive club, which has seen it progress from a greenfield site what it is today. This could only happen mainly due to the forward thinkers, risk-takers and the ability of those to drive on projects.

“Many good members took out guarantees and made personal commitments, against all the odds, to bring projects to fruitions. On behalf of this generation of people involved in Longford RFC, I would like to express a sincere thank you to all of you,” said Maguire.

He said the current project followed the same vein, in that it proved difficult at times to bring to fruition. He thanked those who helped along the way. In particular, he thanked Longford Community Resources Ltd, for their financial support.

Maguire said the development of the club and its facilities continues, with the current floodlights next on the agenda for a much-needed upgrade.

IRFU President, Caleb Powell, said, “Longford RFC have always been a beacon and a leading light in the game. You’ve set the standard with the pitches and facilities and what you have now is setting the standards once more.”

He praised the efforts of club members on redeveloping the clubhouse. “It’s a privilege to be here today to see the phenomenal facilities you have here today. Modern players and younger players, and even the Auld Blacks, look for higher standard in facilities. You have gone beyond the extra mile to provide that here today and I’d like to congratulate you on that.”

Leinster Branch President, Kevin Fitzpatrick, said, “As part of my apprenticeship I was chairman of junior rugby, which meant that I was all over the province and I saw the facilities and I have to say that this is magnificent. I think you’re doing the right thing by putting money into your facilities.”

The day also saw the official opening of the Derek Belton Gym, named after a former club captain. Maguire said, “Derek was a loyal and much-loved player and member of this club up until his untimely passing, and he has left behind a huge legacy.”

Derek’s father, and former club president, Robert Belton, said it was a huge honour for his family to have the gym named after Derek.

“I guess it was 30 years ago since he came to the club first at underage level. He gave it his all and absolutely loved his time at Longford Rugby Club. He was a very proud club member and player.

“It has been nothing but a good feeling to be part of a progressive club like this. When I think about rugby over the years, rugby can turn good kids in to great men and women, and people who can take the blows in life and deal with them – like people here in the club Victor Connell and Mick McGovern, who have faced adversity and soldiered through with great spirit,” said Belton.

Following the launch, the club’s 1st XV and 2nd XV played their respective league matches against near-neighbours Mullingar, with a win for the 1st team to maintain their lead at the top of the of league.

The final game of the day saw former club players turn out in the black of Longford RFC once more under the name of Auld Blacks, against their Mullingar counterparts.

After the action on the field, it was time to reflect the day’s activities in the Sin Bin Event Centre, where members celebrated on into the night.