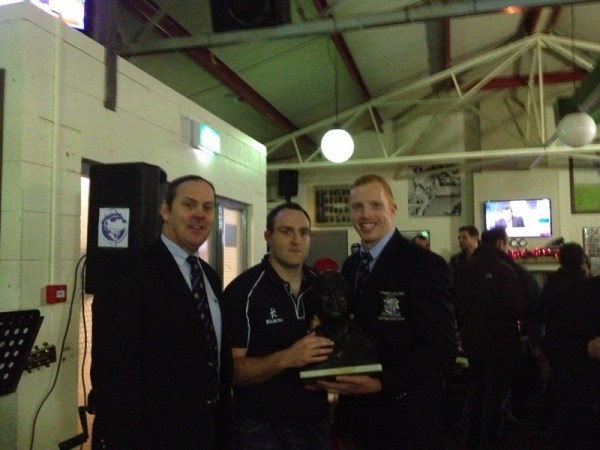 Last Saturday saw the meeting of Garryowen and St Marys College RFC, in Dooradoyle – which apart from the significance of the league points has the added incentive of playing for the Shay Deering Trophy…

St Marys emerged triumphant and took home not just four valuable points but also crucially brought the magnificent trophy, dedicated to the late great Shay Deering. Darragh Fanning, Club Captain, playing his first match for the club this year, and a MOTM performance to boot, along with Stephen Hennessy, President were delighted to receive the trophy back and it was presented by a former St Marys player, now Captain of Garryowen, Rory Brosnan.

The final score was 24-15, with Darragh scoring one himself and assisting in two others for his Leinster team mate Darren Hudson to score.

Seamus Deering left, St Marys College in 1966, having been a brilliant schoolboy rugby player and winning a SCT medal that year. He started veterinary medicine and while at college he played for UCD and Leinster. He qualified in 1971 and practiced in Limerick and so played for Garryowen and for Munster. He loved the tough hard Munster game, but his first love was St Marys. After some years he joined the Dept. of Agriculture as a veterinary Officer and was first posted to Dublin and later to Mullingar where he became a Senior Veterinary Inspector in charge of the Mullingar District Office, covering that area.

During all that time he played for Marys and of course he played for Leinster 13 times, for Munster 18 times and for Ireland 8 times; he also captained Ireland in 1979 against the All Blacks. At that time the provinces played mainly four or five times a year, which gives a perspective of his achievements.

He was a big gentle but very tough man who played wing forward and while at college and in his Ireland days formed a super back row partnership with Fergus Slattery, they were like two “seek and destroy missiles“. But there was a lot more to his game than being a superb tackler, he was a great ball player and reader of the game and was brave to a fault. He was a born leader — from the front. He played at senior level for St Marys for many years, playing to the mid-eighties.

This was a golden era of St Mary’s rugby when many cups and leagues were won, he captained St Marys to a league win in 1979-80 and Shay was surrounded by other great Mary’s players like Sean Lynch, Johnny Moloney, Tom Grace, Ciaran Fitzgerald, JB Sweeney, Terry Young, the Hickies and many more. In the late eighties he was diagnosed with cancer and after a typically brave and uncomplaining fight he died. It was a tragedy for the club and for all those who loved him, and for rugby.

Mount Argus had never before seen the crowd that came to say good bye to “the Deero“. He was such a happy good humoured man who never forgot his friends or his roots. He certainly numbers amongst the most popular and best respected players and members in the history of St Marys and to imagine that he achieved as much respect and admiration in Garryowen and Munster, where you earn respect the hard way, gives some idea of the wonderful man he was. For all those who knew him, he will always have a special place in their memories.

The Shay Deering annual Trophy is played for between St Marys and Garryowen the winning of that highly coveted Deero Bust is added incentive to both clubs.