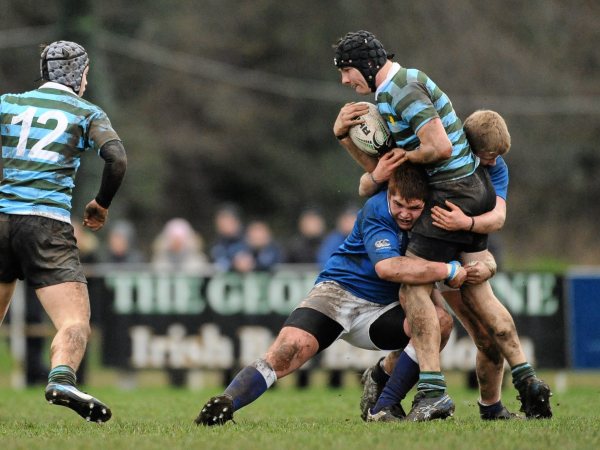 Match report from St. Mary’s victory over St. Gerard’s in the first round of the Beauchamps Senior Cup…

St. Mary’s College grinded out a victory against St. Gerard’s College in the first round of this year’s Beauchamps Senior Cup at a wet and windy Lakelands. This game was postponed twice due to horrendous weather so both teams had to alter their preparations.

St. Mary’s were favourites but they never really got their grip on the game; drop balls and silly penalties paved the way for a slow and sloppy game for the men in blue. St. Gerard’s started brightly with some quick passing and clean rucking but only managed to pick up three points with St. Mary’s stern defence holding them out.

As the game progressed, St. Mary’s forwards began to dominate with captain Tom Lynch leading some ferocious mauls up field. Flankers Niall Curran and Gavin Kenny were providing the perfect mix of steamrolling runs and big hits to keep the Mary’s men on top. After ongoing pressure in Gerard’s territory, the try came from a trademark maul with prop Michael Fitzgerald crashing over the line. 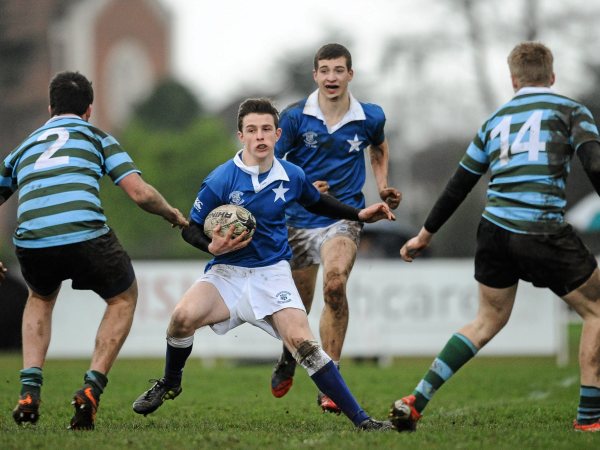 In the second half, the mucky pitch took its toll with increasing handling errors from both sides and the referee blowing up frequently at the breakdown. St. Mary’s couldn’t take their opportunities out wide and gave Gerard’s a chance to get back in the game.

When the St. Mary’s captain limped off in the second half, St. Gerard’s saw the opportunity to attack with out-half Tommy Whittle orchestrating the crash balls in close, and the long passes out wide to fellow Leinster rep Con Callan. But they were unable to penetrate a dogged Mary’s defence. The mucky pitch left a lot of players down with cramp and forced a player off for each team late in the second half.

St. Mary’s were out on their feet with ten minutes to go and Gerard’s gave one final surge, giving the Mary’s fans a nervous final period. Mary’s gave away some preventable penalties and handed Gerard’s territory for a last-gasp effort. They crashed into the Mary’s defence again and again without success, thanks to some tireless defending from centres David Matthews and Ben Hoey, and finally Mary’s managed to win a penalty right on their line and kicked the ball clear of danger. This gave the Mary’s side the adrenaline to push out the final few minutes and grind out a tiring 7-3 victory.