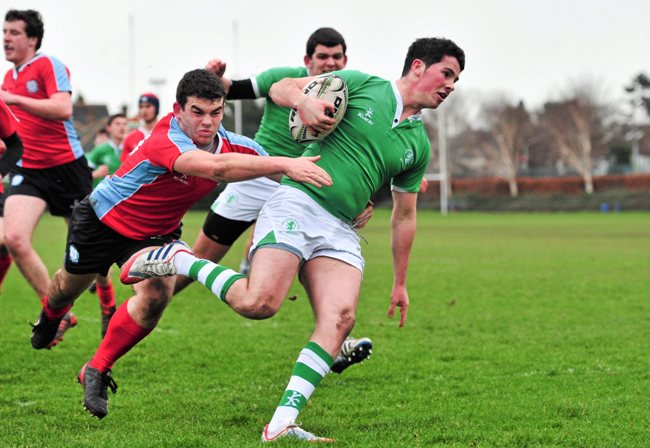 Andrew Tyrrell, a Transition Year student in Gonzaga College, writes the match report for his school’s Vinnie Murray semi-final clash with CUS…

Gonzaga came through an exciting encounter with CUS in Sandymount, outscoring them by five tries to three, 33-21 being the final score.

It was tit-for-tat at first as Gonzaga scored within the first two minutes, Nick Peters scoring after making a break inside the opposition 22. Ross McKeever duly converted, only for CUS to bounce back almost immediately, Luke Trench barrelling over and Matthew Butler converting. The two sides were level again.

It didn’t take long before the Gonzaga supporters had another reason to cheer when Kevin O’ Connor capitalised on a lapse in defence to put his side in front and, soon afterwards, Roddy Fitzpatrick made use of an overlap to stretch the Gonzaga lead and McKeever added the extras.

Gonzaga captain Andy Marks also crossed the whitewash after McKeever hacked a loose ball and he was the first to react with McKeever again scoring the conversion. Trench managed to get one back before half-time and Butler brought the score to 26-14 at the break.

The second half was slower as CUS had a period of sustained pressure on the Gonzaga line and eventually earned themselves a converted try. But Gonzaga managed to extend their lead again when McKeever dived under the tackle to score and made the touchline conversion. Gonzaga now head towards the Leinster Senior Cup and CUS will have to regroup for next year.