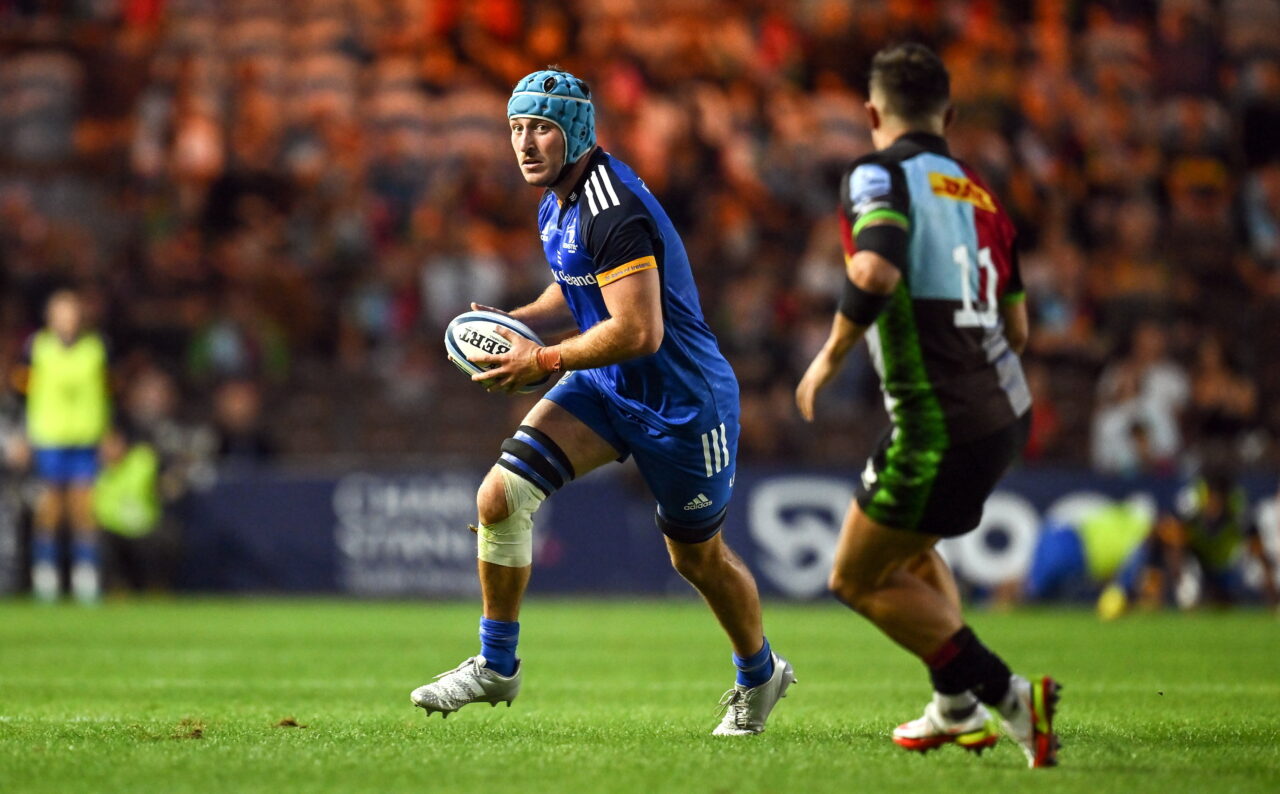 Head coach Leo Cullen used the occasion to have a look at a host of novice professionals, while managing to squeeze out a victory from Scott Penny’s try in the final quarter.

A pinpoint kick-off by Ross Byrne forced an immediate penalty and a lineout in the corner where Jason Jenkins claimed the throw. The pack gathered around for hooker John McKee to make the line, Ross Byrne nailing the conversion in the second minute.

It wasn’t long before Charlie Ngatai and Jenkins were taking the ball up and Byrne was looking to the aerial strength of Rob Russell.

An alert block by Jamie Osborne and grab of the loose ball by Max O’Reilly allied to Ngatai’s cover tackle kept Harlequins in check.

Dave Kearney had to stop lock George Hammond and Will Connors was a nuisance at the breakdown in a watertight defence.

All the while, Leinster were stretched in defence and, from a scrum, Lewis Gjaltema shot between defenders for a fine try, converted by Tommy Allan in the 18th minute.

Leinster looked to Byrne’s boot and the lineout to recover territory where back-to-back turnovers by Vakhtang Abdaladze and Alex Dombrandt provided counter-attack options. 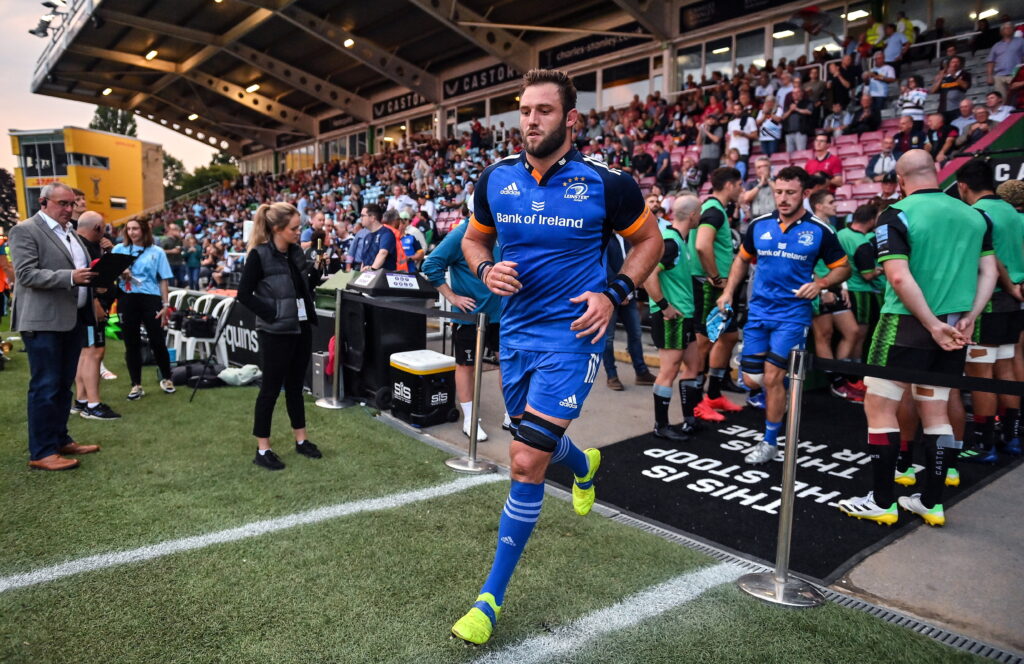 The agility of Ross Molony out of touch on both sides of the throw was eye-catching in allowing the three-quarters to move the ball left and right.

A tremendous piece of skill by O’Reilly stalled a ‘Quins foray forward. But, the patience of Lennox Anyanwu in the centre was forcing Leinster into making decisions in defence.

O’Reilly did well to deal with Dombrandt on the charge. The ball was recycled at speed for Allan to feed Cadan Murley with a superb pass, Allan’s extras making it 14-7 in the 34th minute.

No matter, Leinster bounded forward through the footwork of O’Reilly and the support of Rhys Ruddock and Scott Penny to generate much-needed field position.

A hard-line by Ngatai was supplemented by Michael Milne’s first carry for a try, converted by another replacement Sam Prendergast, on his senior debut, for 14-all at the break.

A period of kicking from both sides in tandem with a number of errors was followed by the kind of lineout athleticism of Alex Soroka and Max Deegan which almost led to a Leinster lead.

It came along soon enough when Deegan’s dummy, acceleration and offload allowed scrum-half Nick McCarthy to slide over for 19-14 in the 51st minute.

Straight away, Harlequins were back on the front-foot. Tom Lawday’s ball out the back was taken to the right corner by Nick David, converted by Allan for a two-point edge in the 55th minute. 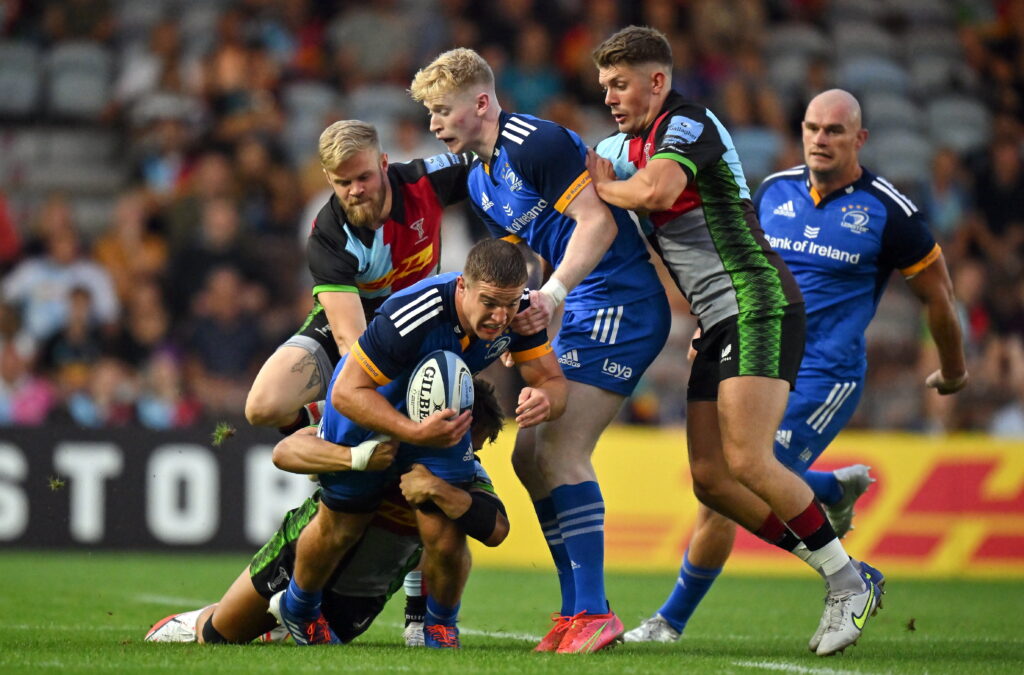 The clutch hands of Brian Deeny at the ruck, Prendergast’s lovely tumbling kick and Osborne’s chase and capture of Tyrone Green forced a five-metre lineout.

Soroka was secure from Lee Barron’s throw. Martin Moloney careered away from the maul and Penny, back on, grounded the try for Prendergast to convert for 26-21 in the 68th minute.

The thin Blue line was strong enough to repel the next attack and McCarthy had the gas to hold off Will Evans from a chip.

Increasingly, Leinster were having to work without the ball as the home club

looked to give their supporters what they wanted.

However, an absolute rocket-launcher of a kick from Osborne turned defence into attack and they had the composure to close out the game.