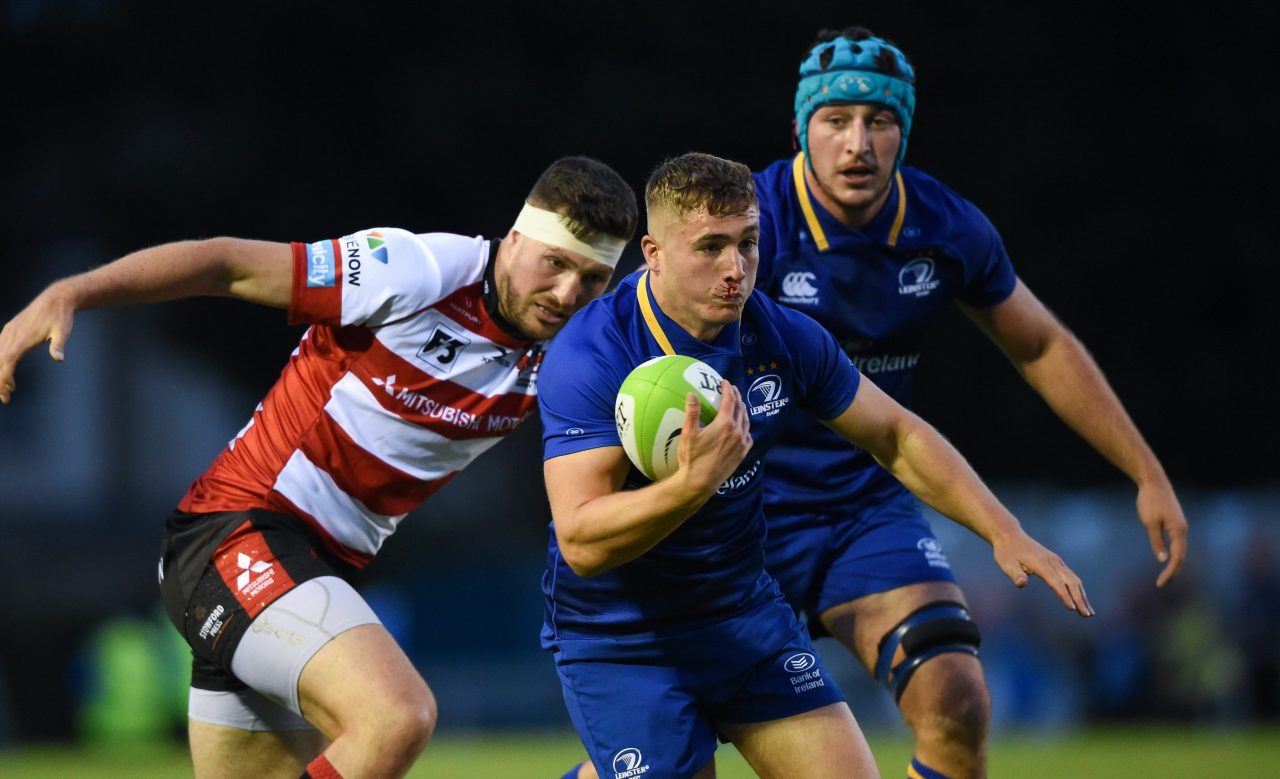 A late change in personnel – Adam Byrne started for the ill Jimmy O’Brien at 13 – did not put Leinster off and it was an encouraging start to the game with an early try for Leo Cullen’s men in front of just over 2,500 spectators at the immaculate Templeville Road grounds.

Scott Fardy’s first introduction to his new public came in the way of a textbook hit-up and recycle before Jamison Gibson Park went about pulling Gloucester left and right for Fardy to fly through the middle. Scrum-half Gibson-Park and prop Peter Dooley were then the link men for Isa Nacewa to steal over on the left for 5-0 in the first minute.

However they didn’t have it all their own way in the opening exchanges and when Bryan Byrne peeled away from a maul, the hooker got isolated and Lewis Ludlow made sure a penalty was forthcoming.

This afforded the Cherry and Whites position. But, number eight Max Deegan was dominant in the tackle and flanker Josh Murphy counter-rucked ferociously.

Leinster were smooth in their movement out of defence and it wasn’t long before they scored their second try of the evening.

The front row churned out a penalty and Jordi Murphy, Max Deegan and especially Rob Kearney created the opening for hooker Bryan Byrne to pick up his second pre-season try in two matches for Ross Byrne to convert in the 14th minute.

The greatest source of ground for the visitors came from the long balls to touch from penalties by out-half Owen Williams. Hooker Henry Walker just couldn’t connect with his jumpers.

They were soon back in it, however, from a nicely constructed release down the left for Henry Purdy to get outside Rob Kearney and for Williams to convert in the 25th minute to trail 12-7.

The home side went through the gears again though as Gibson-Park and the Kearney brothers made good decisions to open up Gloucester down the left.

The ball was quickly moved for Max Deegan to have the momentum to make the line, fly-half Byrne’s conversion moving them 12 clear in the 36th minute.

Just before half time, Gibson-Park’s grubber put Gloucester in a bind and Nacewa came through to force a penalty. They preferred a scrum to the points. It didn’t pay off though as Adam Byrne’s final pass under severe pressure did not go to hand.

Leinster went in at the break 19-7 to the good.

The home side made five changes at the break with Gloucester making 13 in total but again Leinster were able to kick on where they left off at the end of the opening forty.

A swift pick-up by Jordan Larmour and Adam Byrne’s power through contact were the triggers for Leinster to move forward again.

The maul made significant headway and the scrum was convincing enough to win a penalty for Byrne who split the sticks for 22-7 in the 55th minute.

The front row of Dooley, Byrne and Michael Bent was making hay at the scrum by now, handing Leinster another penalty and maul and time to clear a path for Larmour to ghost over and Byrne’s conversion to make it 29-7 in the 60th minute.

The home side exploited further gaps in the Gloucester defence for number eight Deegan’s second finish for replacement Cathal Marsh to make it 36-7 in the 65th minute.

The second double of the evening came four minutes later as a delicate chip by Marsh over the first line of defence was taken on and finished in style by Larmour for another seven-pointer for the full back in the 69th minute.

To their credit Gloucester kept coming at Leinster with a number of quickly taken penalties keeping the Leinster defence on their toes. Andy Symons’ support line was rewarded for their second try just before Leinster old boy Tom Denton joined the game.

The boys in blue hit back immediately though as Hugo Keenan’s pace and momentum taking him to the whitewash for Marsh’s third conversion in the 74th minute and it stayed that way until the final whistle.

Leinster’s final Bank of Ireland Pre-Season Friendly is against Bath Rugby next Friday in Donnybrook (Kick Off: 7.30pm) with tickets still on sale HERE.