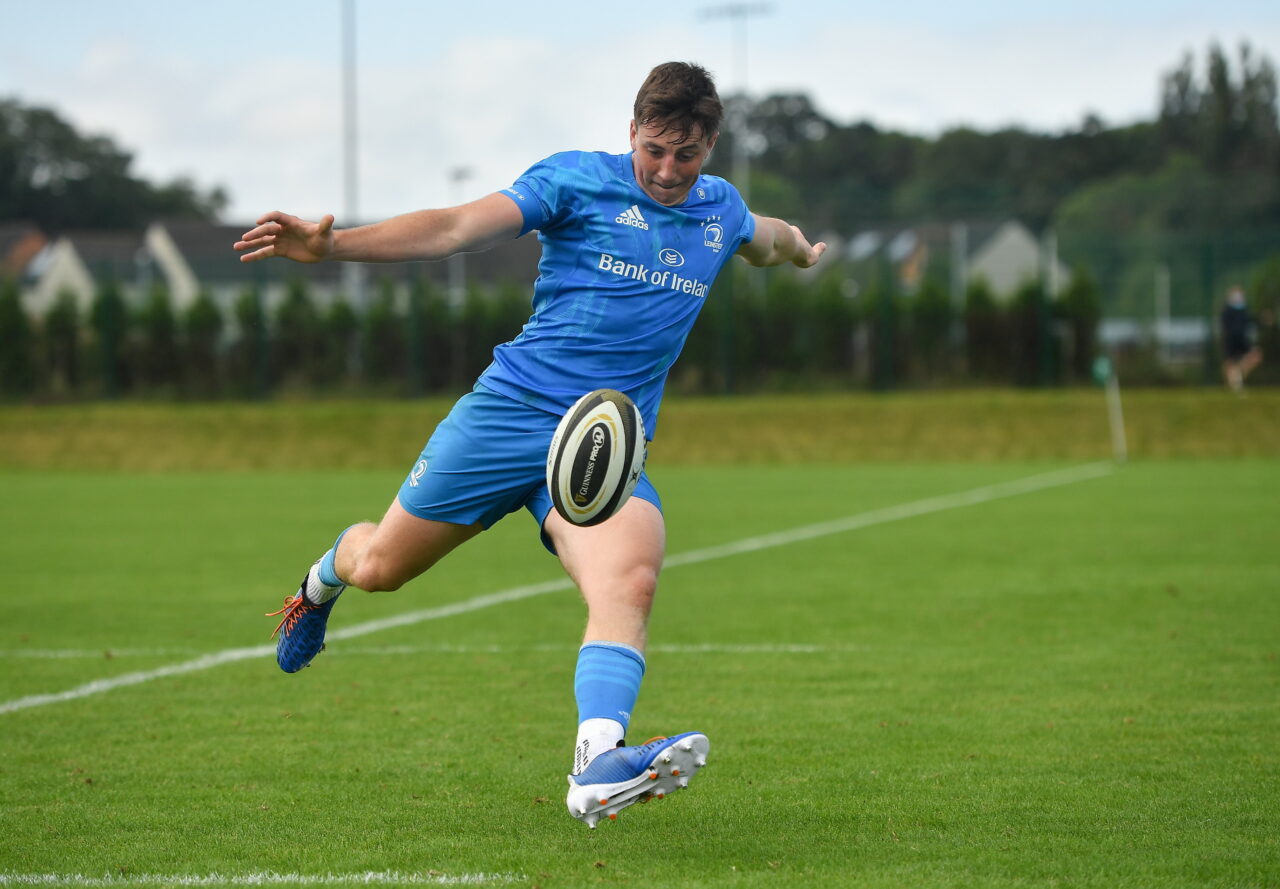 Connacht Rugby Development XV produced a devastating display as they notched up 11 tries in a one-sided encounter with Leinster Rugby in their interprovincial series game at the IRFU High Performance Centre in Abbotstown.

First-half tries from hooker Charlie Ward, wingers Josh O’Connor and Mack Hansen (2), and captain Conor Fitzgerald put the Westerners 29-0 up as they overwhelmed the hosts; restricting them to just two serious attacks in the match.

The one-way traffic from the visitors continued after the restart with further tries from centres Peter Sullivan and Cathal Forde, substitute Darragh Kennedy, prop Greg McGrath and full-back Oran McNulty for 60-0.

Leinster did grab a late consolation through replacement Conor Duggan of St Vincent’s Castleknock College before Connacht prop Will Reilly completed the rout in added on time.

Following their narrow defeat to Ulster last weekend, Leinster were looking to bounce back and make a strong start as they practiced hitting the tackle pads right up until a minute before the whistle sounded for kick-off. 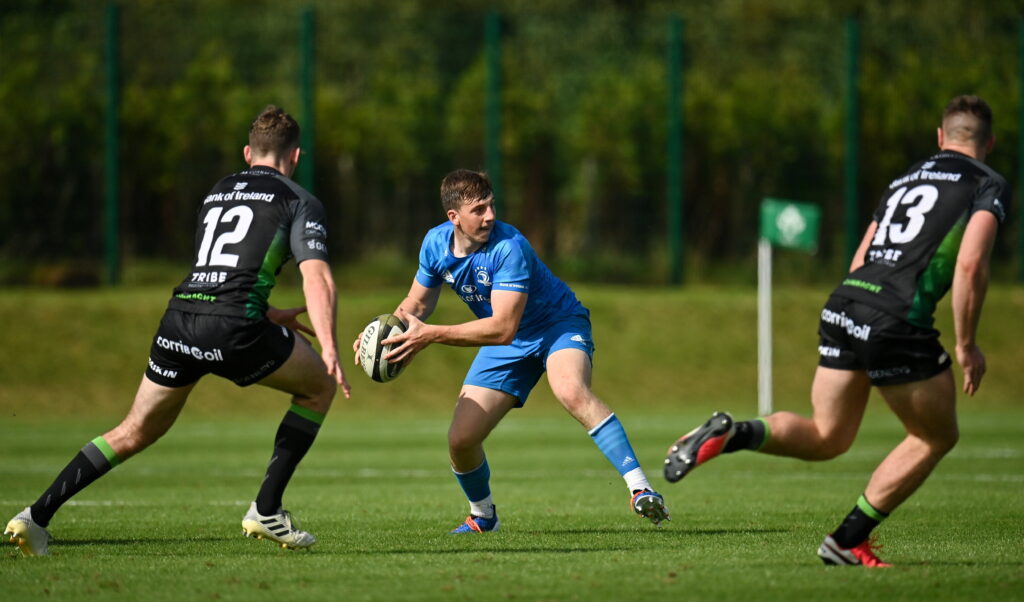 However, they came up against a formidable Connacht outfit who from the onset looked to play an expansive game, spinning the ball wide at every opportunity and starved Leinster of possession and territory with their rush up defence forcing turnovers.

The difference in quality told inside the opening 10 minutes as the speedy Hansen dived over in the corner on four minutes and Ward crossed from close range on the other side as Connacht raced into a 10-0 led.

O’Connor showed Jonah Lomu-like strength on 17 minutes as he brushed off three attempted tackles while sprinting down the touchline to score. Fitzgerald made it third-time lucky with the conversion for 17-0.

Five minutes later, Hansen grabbed his second try when he stepped inside following a break in midfield and a stunned Leinster were left with a mountain to climb.

Yellow cards were shown to Leinster captain John McKee and Connacht centre Sullivan before the home side registered their first major attack inside the Connacht 22 on the half-hour.

Despite several phases and attempts by Leinster to inch closer to the try-line, Fitzgerald intercepted a pass to the backline and ran the length of the pitch to score then converted to put Connacht in a commanding position at the break.

A series of substitutions, injury treatments and water breaks on a sweltering hot day halted the onslaught after the resumption until the hour mark, when Connacht crossed five times in a bulldozing 17-minute period.

The returning Sullivan and fellow centre Forde broke through the home defence from attacking backline moves to cross as Leinster struggled to halt Connacht’s momentum.

Replacement Kennedy jotted over after an off-load from Sullivan, McGrath touched down under the posts and McNulty shrugged off a tackle to touch down as Fitzgerald took the scoring to 60. 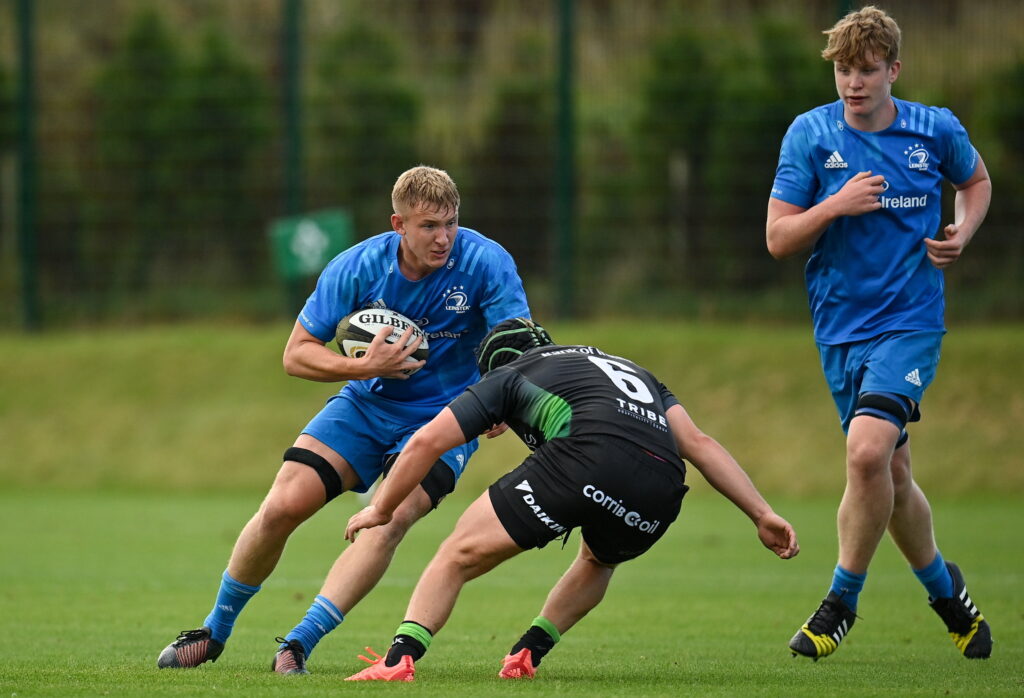 Leinster though, who were competitive at set-pieces, – particularly in the scrum – did finally get points on board from their first foray of the second half inside the Connacht 22 in the 78th minute.

Following a penalty and lineout, substitute Duggan burrowed over from close range and out-half Charlie Tector of Kilkenny College/Lansdowne FC successfully landed his one and only kick.

There was still time for Reilly to add further salt to Leinster’s wounds as he crossed for the game’s 12th try and Fitzgerald easily converted his sixth kick to round off the scoring.