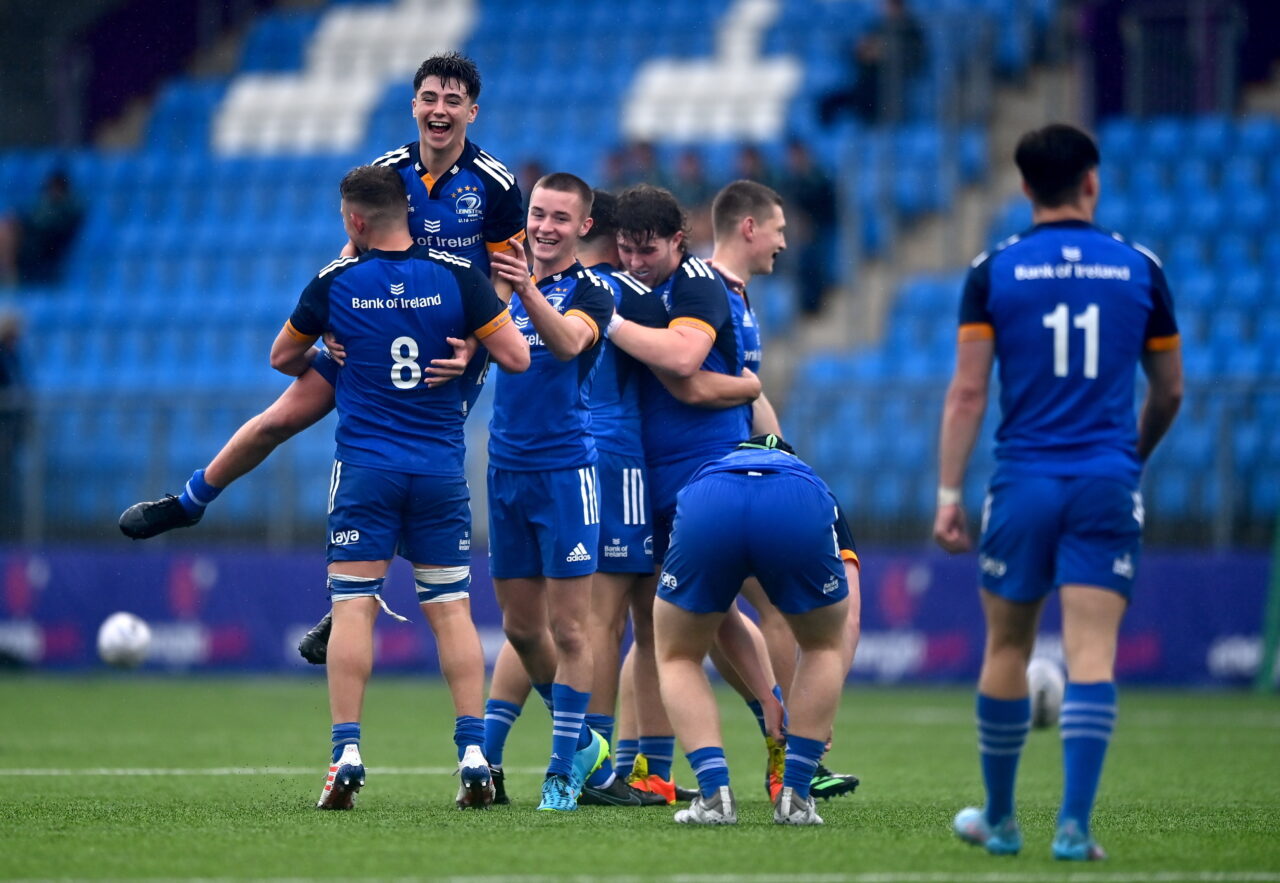 Leinster Rugby came from behind twice to claim the U-18 Clubs Interprovincial title at Energia Park today.

Ulster were a match for their hosts until last-quarter tries by Connor Fahy (2) and Paidi Farrell made all the difference.

The constant rain did not hamper the enthusiasm and the intent to play by both sides as Leinster props Darragh Brennan and Tadhg Ronan made favourable impressions early on.

Although Ulster lost their captain Oliver Smyth to injury, they countered through a direct attack.

Hooker James McCammon got in behind and flanker Billy Allen did the rest of the work for Harry McKeown to convert in the 10th minute.

Just when Leinster looked to be gaining a foothold, Ulster’s pressure in defence allowed them to relieve pressure.

Better again, they were able to force a penalty at the breakdown for centre McKeown to make it 10-0 in the 14th minute.

Fahy was quick to grab a penalty on the floor and out-half Peter Burgess got every inch out of a kick to touch. 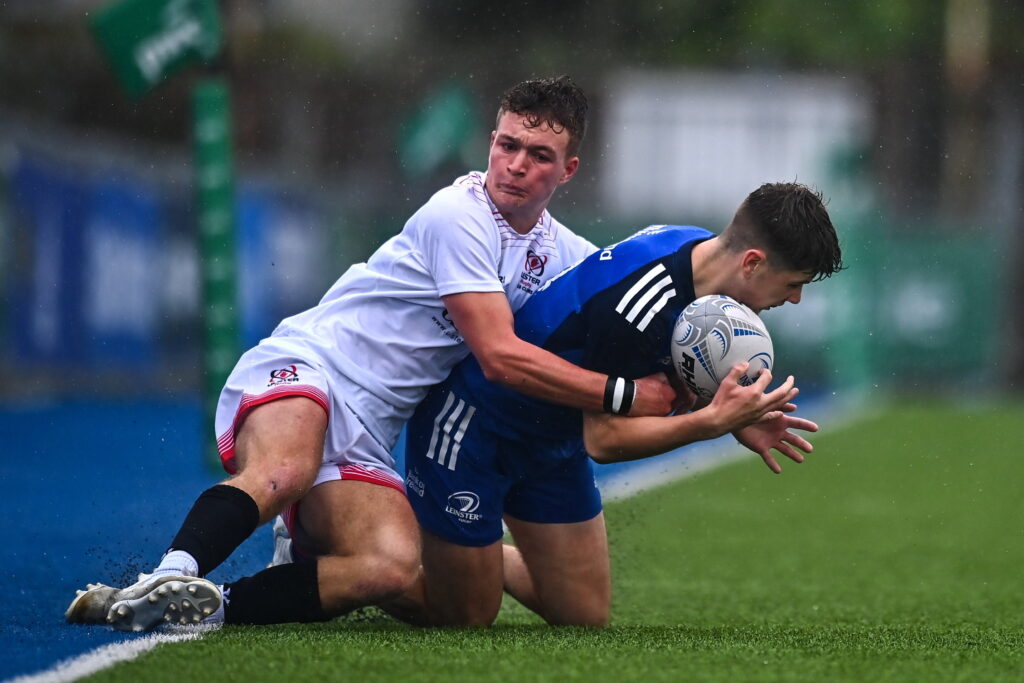 The vigilance of Jack Boyan secured possession only for Leinster to be called back for an earlier infringement as they crossed the line.

It was encouraging all the same. A quick tap penalty by scrum-half Andrew Doyle unhinged Ulster’s defence.

Doyle was back on the ball to shift it right for Evann Shelley to splash down for 10-5 in the 25th minute.

The home side was growing in confidence, pressing the action again for Burgess to slot a penalty in the 28th minute.

The rise in penalties, primarily for offside, cost Leinster ground and points to McKeown’s shot from the left in the 31st minute.

A well-judged crossfield kick by full-back Rory Allen just slipped out of the hands of left-wing Paidi Farrell to leave it 13-8 at the break.

Leinster were transformed from the restart, the forwards, led by Orama Dauramuzi, driving it up.

Scrum-half Doyle sniped again and Burgess knifed over at the posts to also convert, taking the lead for the first time in the 37th minute.

The refusal of Ben Neely to go to ground in contact fuelled Ulster’s attack and No 8 Reuben Gibson muscled his way to the line for McKeown to add the extras for 20-15 in the 40th minute.

Stellar work in contact by tighthead Ronan prevented further damage. Dylan Kelly nabbed a turnover at the base of an Ulster scrum to generate go-forward ball. 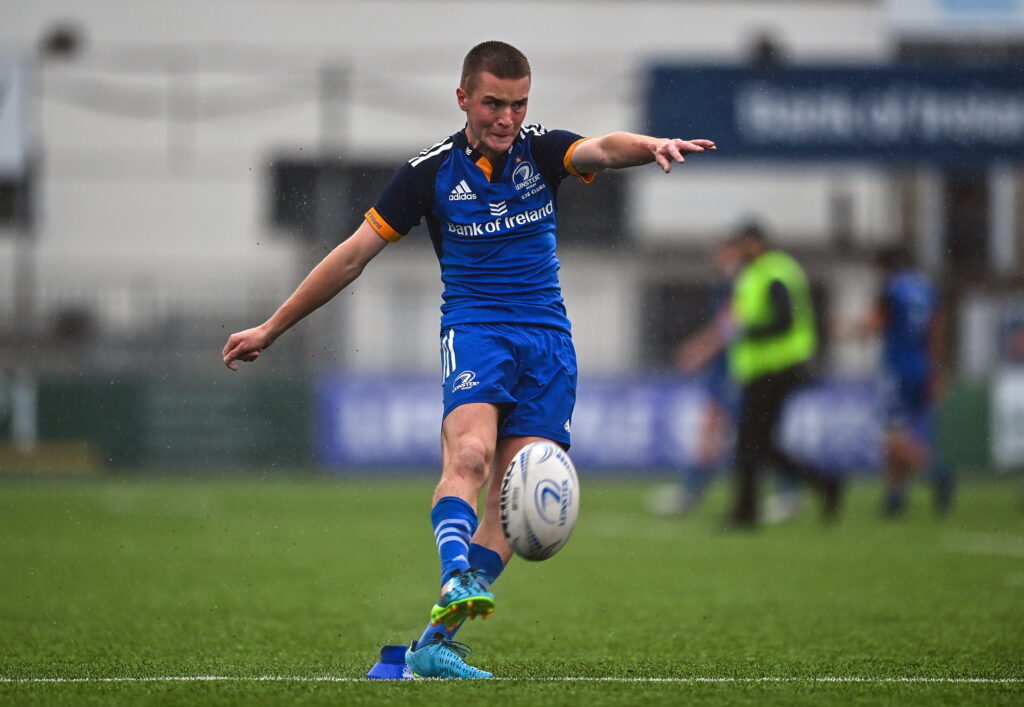 A delightful chip into space by Burgess was taken at top speed by Fahy for a superbly executed try, Burgess converting for 22-20 in the 56th minute.

Anything less than a two-score lead would be tricky to manage. Centre Darragh Farrell flashed real class in slipping an inside pass for Paidi Farrell to fizz through the defence for an unconverted try in the 61st minute.

Leinster were keen to keep playing rather than run the clock, replacement Conor Moore almost scoring in the right corner before Fahy showed considerable strength to beat the cover.