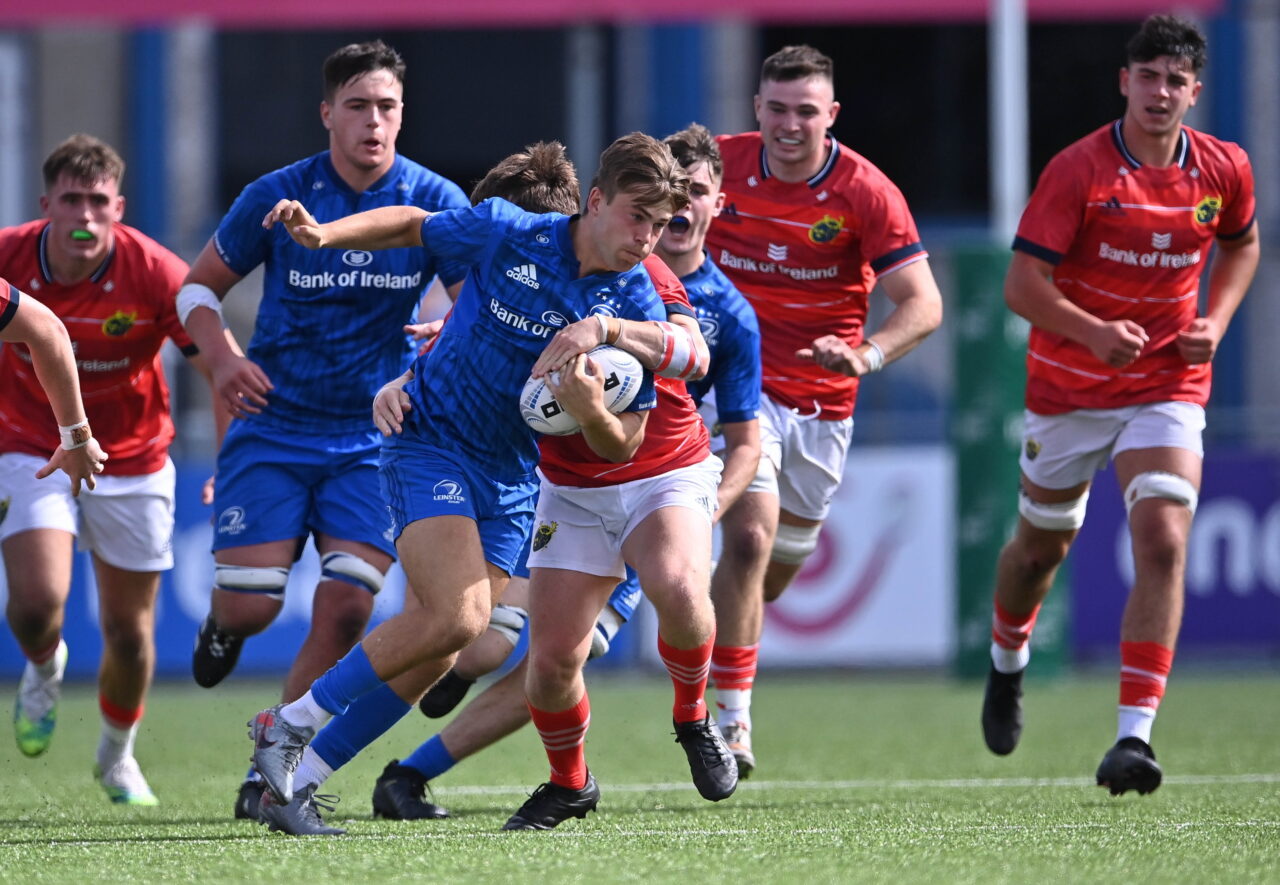 A late try by Jack Murphy was all that stood between two well-matched provinces in the U-19 Interprovincial Series at Energia Park on Saturday afternoon.

A simplistic assessment of this high-class encounter travelled along traditional lines as Leinster’s back play eventually got the edge on Munster’s maul.

But, there was quality all over the field right from the off, Leinster getting the perfect start when a chip in midfield by Sam Berman caused a problem Munster were unable to sufficiently solve.

Hooker Stephen Smyth, transitioning from the back row, found his target at the lineout and a slick one-two between Smyth and wing Finn Treacy ended with Smyth’s try.

Hard-charging Brian Gleeson led Munster’s rapid response unit. The creep of yards forced a penalty and a lineout that led to a maul.

Munster moved into overdrive for Danny Sheahan to claim the try, converted by Ben O’Connor for a 7-5 edge in the 12th minute. 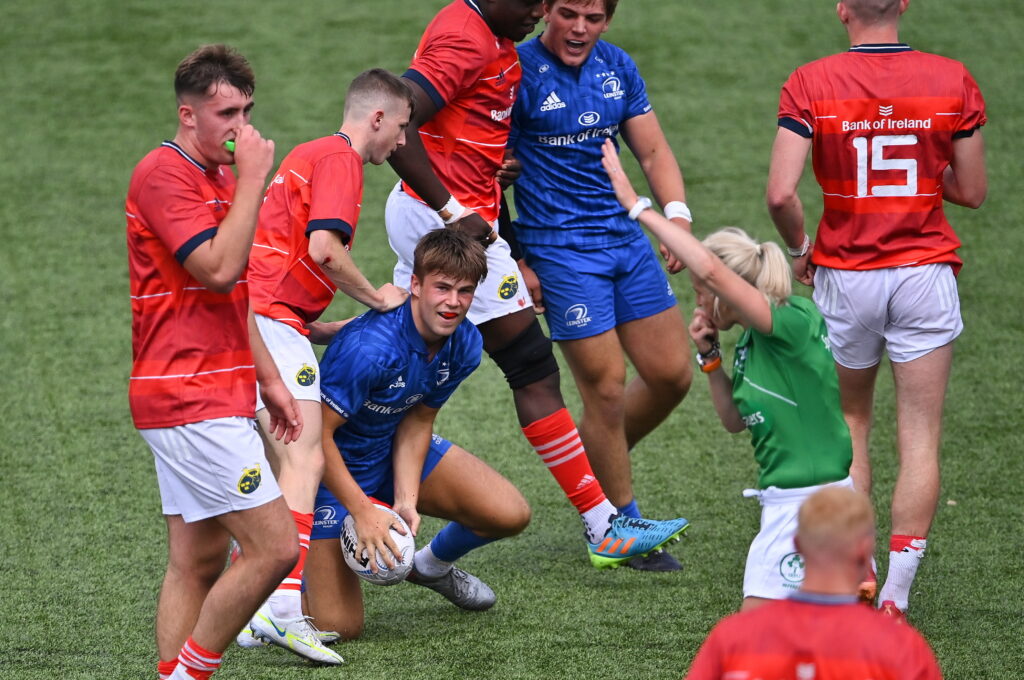 Leinster’s pursuit of the restart earned a penalty which they could not turn into points and Gleeson was soon stealing the ball away at the breakdown.

They looked to be putting their phases together nicely when captain Berman stepped up for an interception, turning defence into seven points as Murphy converted from the shadow of the posts in the 21st minute.

An unlikely offload from prop Grant Palmer, another moving from the back row, gave Jules Fenelon the space to tumble a kick fully 50 metres.

However, Munster’s agility at the ruck was obvious, Evan O’Connell the latest to snap up a turnover.

A change of direction off a Leinster scrum in midfield was supported by Hugo McLaughlin’s delicious pass for left-wing Fenelon to threaten.

When the rampaging Gleeson got away from his support, Willhelm de Klerk pushed for a penalty on the floor.

Out-half Murphy arrowed a pass to give Fenelon a chance. Sweeping back the other way, sweet handling on the right almost did the trick for Smyth.

Leinster were finding their groove, Murphy orchestrating a coherent attack in which Berman arced around the cover to find McLaughlin spinning out of a tackle for a superb try, converted by Murphy for 19-7 at the break.

Another Leinster move at the front of a lineout, again involving Smyth, was good for a healthy gain of ground until Munster pressure in midfield caused a spill. 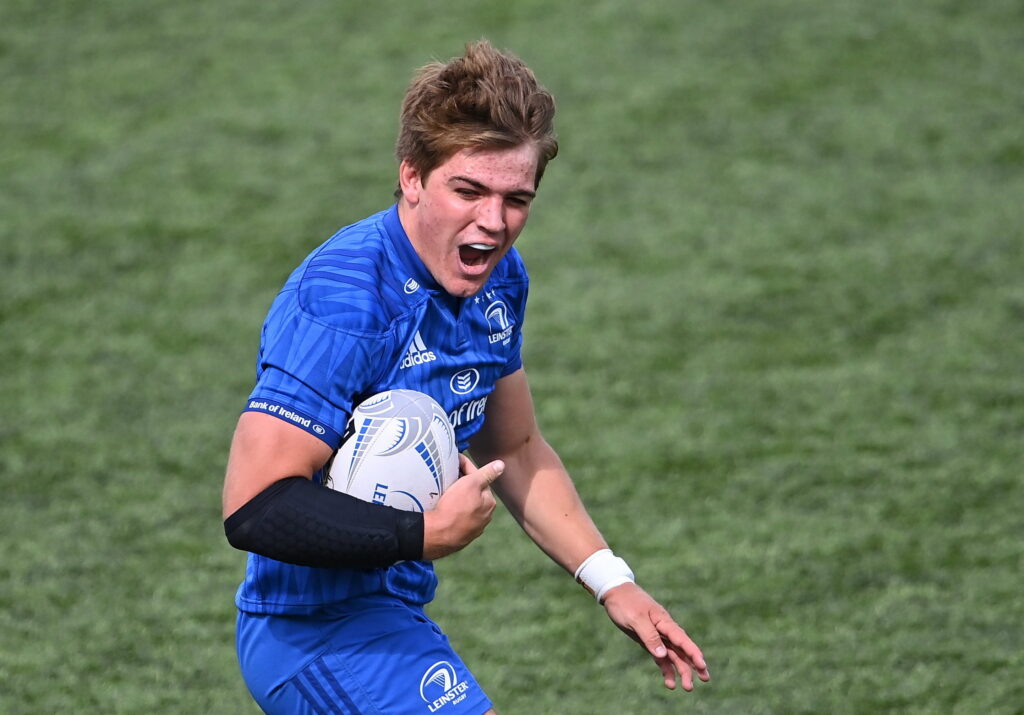 Leinster made a better fist of countering the maul, forcing a scrum turnover only for Cillian O’Connor to pin them down with an astute angled kick.

From there, Munster got their hands on the ball. Danny Sheahan drove hard and high. Gleeson went low with the leg drive for the try, converted by O’Connor, for 19-14 in the 46th minute.

The visitors had their tails up, Gleeson clutching at an overthrown lineout to trigger a counter-attack in which Danny Sheahan was instrumental in creating an overlap until McLaughlin’s intervention.

Once again, the Munster maul became a factor, Sheahan holding the ball at the back to crash over for a tied game in the 53rd minute.

It was in the balance. The increase in kicking and the impact of Tom Larke and Ben O’Connor in making crucial tackles only served to heighten the tension around the hour mark.

Munster looked to the forwards to grind it out, while Leinster knew their best way was around the outside.

The southern province marched a maul almost 20 metres where Leinster’s resolve showed up in staying in that fight for a turnover.

However, Leinster weren’t out of trouble. They had to withstand another drive to allow Murphy to majestically clear his lines for 40 metres.

The three-quarters sprang into action, Treacy taking an inside shoulder to go past halfway. Tadhg Brophy spotted a slot on the shortside, slipping the ball to Murphy.

The out-half had enough speed to go beyond the last defender for an opportunistic try into the left corner in the 67th minute.

When Adam Deay got his big mits on Munster’s ball, it signaled the end of a titanic struggle which could have gone either way.