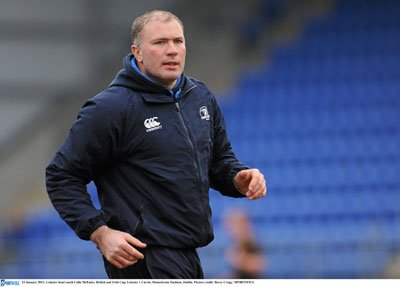 Having qualified from Pool A in second place behind high-flying Worcester Warriors who are the pace-setters in the Division One Championship, Leinster now face a tough tie away to the second placed English side who include in their ranks former Leinster winger Brendan Burke.

Speaking ahead of the knock-out clash, McEntee admitted that the hurried nature of the fixture, coming as it does less than 24 hours after the senior team’s Magners League clash against the Scarlets, was hardly ideal but that the squad were fully focused on earning a coveted semi final berth.

“It has been a challenge this week with so many players away on Irish Camp, Magners League preparation and Ireland Under-20 commitments, but that merely serves to hone our focus ahead of an exciting knock out game”, he revealed.

“We’ve been delighted with the approach of the players this week despite our lack of preparation time and each of the players is determined to stake their claim. The B&I Cup is one of just three competitions that we compete in at the top level and so it’s vital that we get off to a strong start and assert ourselves from the off.”

“A lot of hard work has gone into qualifying out of our pool and the players don’t want to let up now. To get out of a group with Worcester, Newport away and the Cornish Pirates was no mean feat and the competition has gone from strength to strength again this year.

“The same levels of enthusiasm have been evident (this week) and I suppose that a lot of the panel can look to the likes of Andrew Conway, Ian Madigan, Jack McGrath and Ian McKinley for motivation as they have all benefited from senior game time in recent weeks.

“Encouragingly the senior management have shown their indication to reward good form in this competition. But we face a massive test and we’ll have to be sharp from the off.

“Bedford are a good side with a big forward unit. We have seen some of their footage this year and they’re clearly a side who like to play with pace and tempo. They beat Ulster in the pool stages finishing in top spot and in addition finished second in the league stage of the championship, so they’re a team we have great respect for.

“But this week is, in essence, a cup final for us and we’re just focused on our own performance. Saturday afternoon is about winning!”