Metro and North Midlands victorious in Shane Horgan Cup Round 3 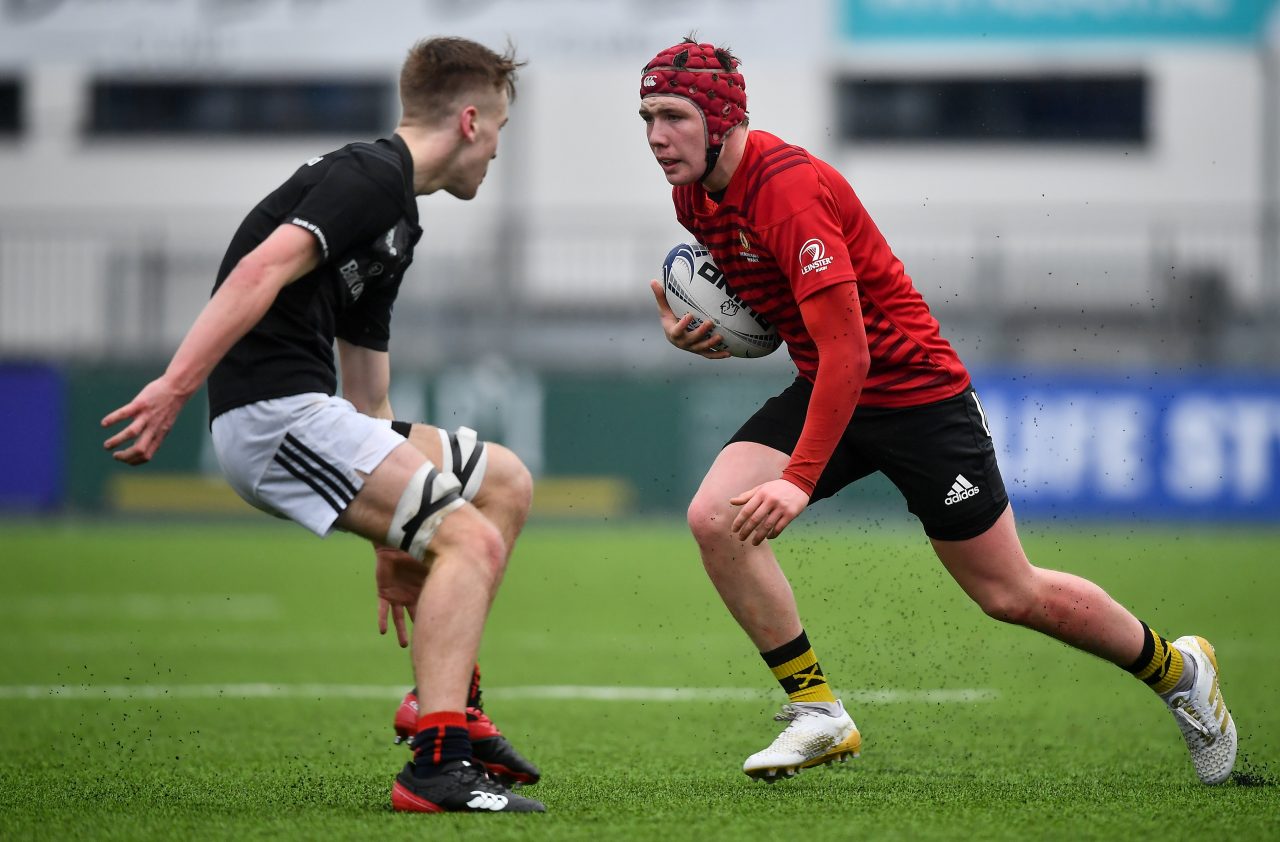 Yesterday, Round 3 of the Shane Horgan Cup, for Area Under-16 sides, took place at Energia Park, with Metro facing the North East followed by the North Midlands meeting the South East.

A few showers before kick-off made the surface slippery and, as a result, the opening phases of both games were a little scrappy. Credit to all the players involved once they adjusted to the conditions both games were entertaining right to the final seconds.

There was a big attendance at Enegria Park who gave all four sides plenty of support throughout the afternoon.

This game was a slow burner. The opening 15 minutes saw the North East dominate possession within the Metro ‘22’ without scoring.

Metro’s discipline was tested, but they remained steadfast and ultimately broke clear through a long clearance towards midfield.

Good follow-up saw Taylor O’Sullivan pick up the loose ball, taking the game into the opposition half for the first time. Metro displayed good handling and rucking skills as they pressed towards the opposition’s line.

Midway through the half, Metro stole a lineout close on the 5-metre line which resulted in an unconverted try scored by Metro’s No 8 Anrai Poole.

From the kick off, Metro again attacked through the backs initially before Barnhall prop Colin Taylor joined the attack charging through several defenders to score out wide. 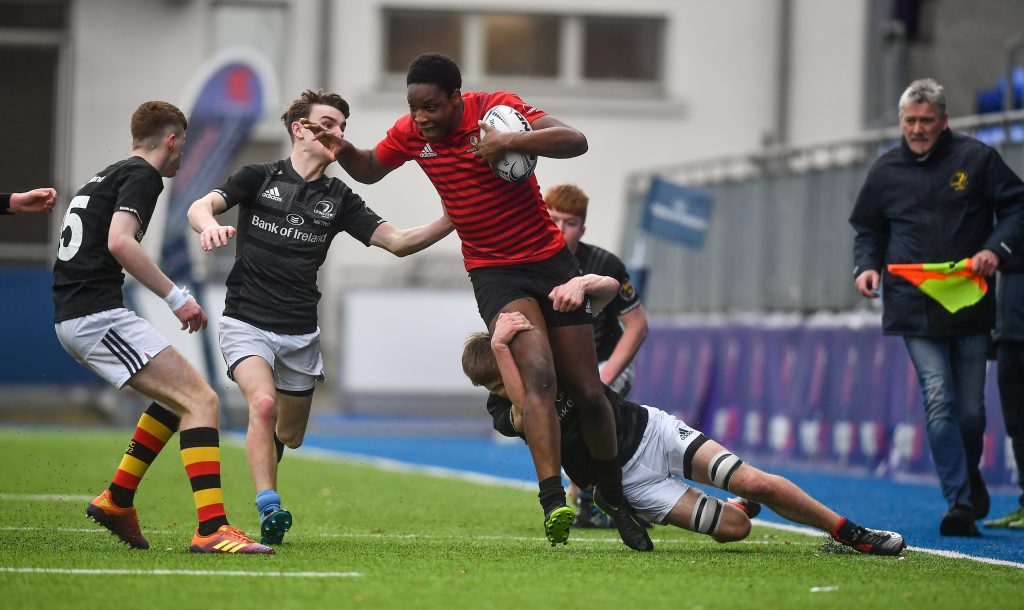 North East were not to be outdone and, when the Metro defence failed to clear, Colm Wall picked up to crash over for a try, making the score 10-5 at the break.

Early in the second half, the Metro backs showed excellent handling skills moving the ball across the field, left and right. David O’Donohue received the ball at pace to score a try converted by Taylor O’Sullivan.

After 48 minutes, North East worked the ball close to the Metro line.

Following an infringement, Metro were reduced to 14. Quick thinking by the attack resulted in a try for the influential Boyne wing forward, Oisin Lynch, converted by substitute Eoghan O’Connor Flannagan.

First, North East attacked through Oisin McDermott and O’Connor Flanagan, who got the ball to Balbriggan’s Michael Ibrahim now playing on the wing.

Ibrahim took the ball at pace, beating several defenders, to touch down wide out. The Skerries man again converted, this time in most challenging circumstances.

A loose kick-off resulted in a final opportunity for Metro. Again Byrne carried before releasing Evan Gernon who survived a tough challenge in handing off to Anrai Poole. More interplay among the backs released Josh Hanson to score in the corner.

The conversion was missed, but the final whistle brought relief and desperation to the competing sides.

The second game of the day saw the two unbeaten sides face off, as the powerful South East side took the challenge to the Bective end against a mobile North Midlands 15.

Following a testing period between the packs, the South East forced their way into the North Midlands ‘22’.

Strong rucking and excellent work among the forwards resulted in two close-range penalties.

Wexford Wanderer’s Kaylam Codd opened the scoring when he crashed over for a try converted by Tullow’s Adam Johnson.

North Midlands responded soon after with a great move started by Sean Tipper who released the backs, who in turn, passed to the fast moving Oisin Cooke, the Clane man going over for an unconverted try.

Grant Palmer hit back with South East’s second try taking us into half-time. 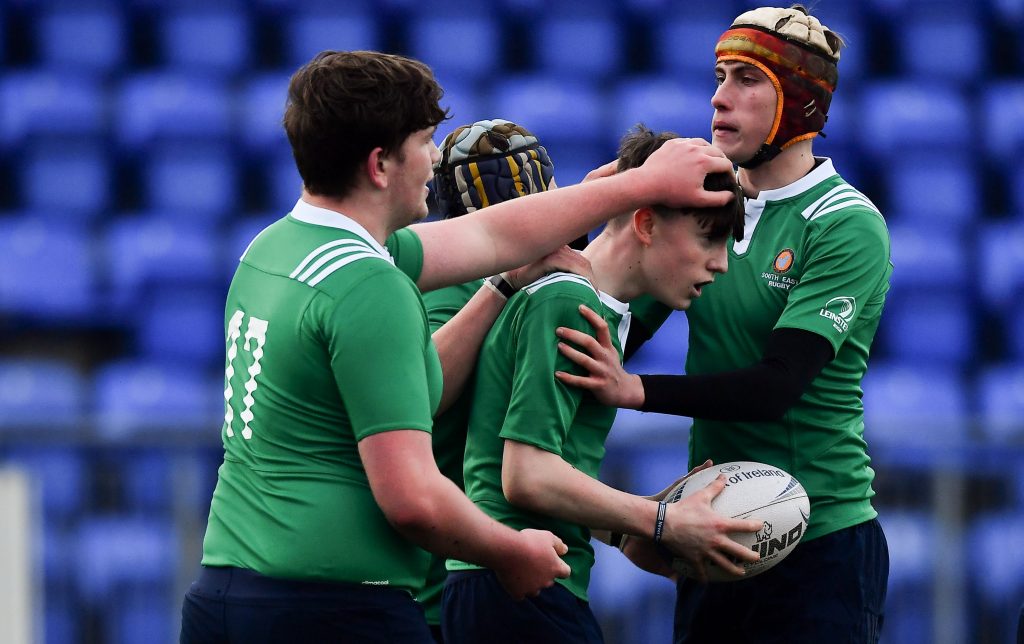 Directly from the restart Naas’ Charlie Sheridan broke inside his own half and, having escaped two tackles, ran clear to score under the posts before converting.

Quick feet enabled Sheridan to beat his opposite number to score close to the corner flag.

A 5-metre scrum allowed scrum half Bobby Connolly to respond for South East diving in to score a converted try.

Another Sheridan try followed for North Midlands when South East put themselves under pressure with a kick out on the full.

However, the scoring was not over. With 15 minutes remaining, North Midlands again breached the defence with Dylan O’Keeffe (Newbridge) and Charlie Sheridan taking the ball into the red zone.

Quick thinking by scrum half Dylan Kelly enabled him to escape the last defender to score another try.

Now trailing in a two-score game, South East responded and took the ball directly into the North Midlands ‘22’. Quick movement of the ball got them close to the line.

With the carrier being held up, South East mauled closer with Arklow’s Jamie Tobin crashing over for a try converted by Adam Johnson.

Again with the clock in the red, this game had one final twist. A loose ball in midfield was picked by the marauding North Midlands pack.

Pressing forward, they reached inside the ‘22’ where South East were penalised for not releasing and Charlie Sheridan was able to extend the lead to four again.