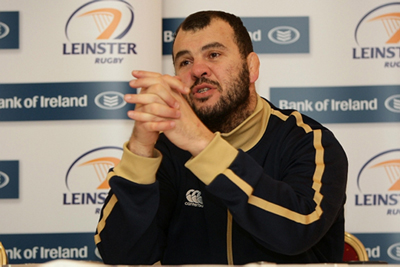 Speaking ahead of Saturday evening’s Heineken Cup clash in the RDS, Leinster Coach MICHAEL CHEIKA said that the squad are looking forward to playing their first game in three weeks against an improving Brive side…

‘It has been pretty difficult to get everyone into an environment where we can get some training done because the fields have been pretty heavily affected and the conditions haven’t been the greatest. But somehow we have come through it without missing any days. We did a lot of contact work today and everybody was chomping at the bit to get stuck into that, so that’s always a bit of good fun!

‘We’re lucky in one respect that we got a game in over Christmas. The international players, who have had big workloads, understand what’s required when you have a lay-off for a couple of weeks. They have done it before. So you’ve got to take the positive out of it that they have had a bit of a break in the middle (of the season). There’s always a risk that you haven’t played together but we’ve gotta deal with that and other teams are dealing with the same issue.

‘For (Shane) Jennings maybe more than (Jonathan) Sexton nothing replaces playing (and) both of the players who took their places played well. So it makes selection quite difficult.

‘The team that we’re playing now is very different to the Brive side we played in October. In their last four games they have beaten Toulouse and Perpignan at home and defeated Albi away in the snow. It was an interesting game to watch because the entire pitch was white. They have a far more engaging philosophy now; they’re very much more forward orientated with a lot of mauling and a lot of aggression.

‘They’re very hard on the ground and the two new coaches have obviously put their own stamp on things in the contact area, which is something that we’re very mindful of… They’re very combative and their backs are giving them a good platform to get into the game as well.

‘Depending on the conditions, I think that we’re going to be in for a real torrid battle on the ground. They have accumulated a lot of points in their own championship now and that’s a consequence of improved play.

‘If we remember back to the Castres match that we played down in France last year, when they defeated us it was a bit of a catalyst for their climb up the table when they were running second last and they had nothing really to play for in that match. I think we have been in the business for too long to fall into that trap. So no matter who they send (over), we have a job to do.

‘We have put ourselves into a situation where every match is a cup final by losing the first game. And we’re still right in the middle of that. Even though we have had a few wins since then, that changes nothing from the fact that we have to win this game.’