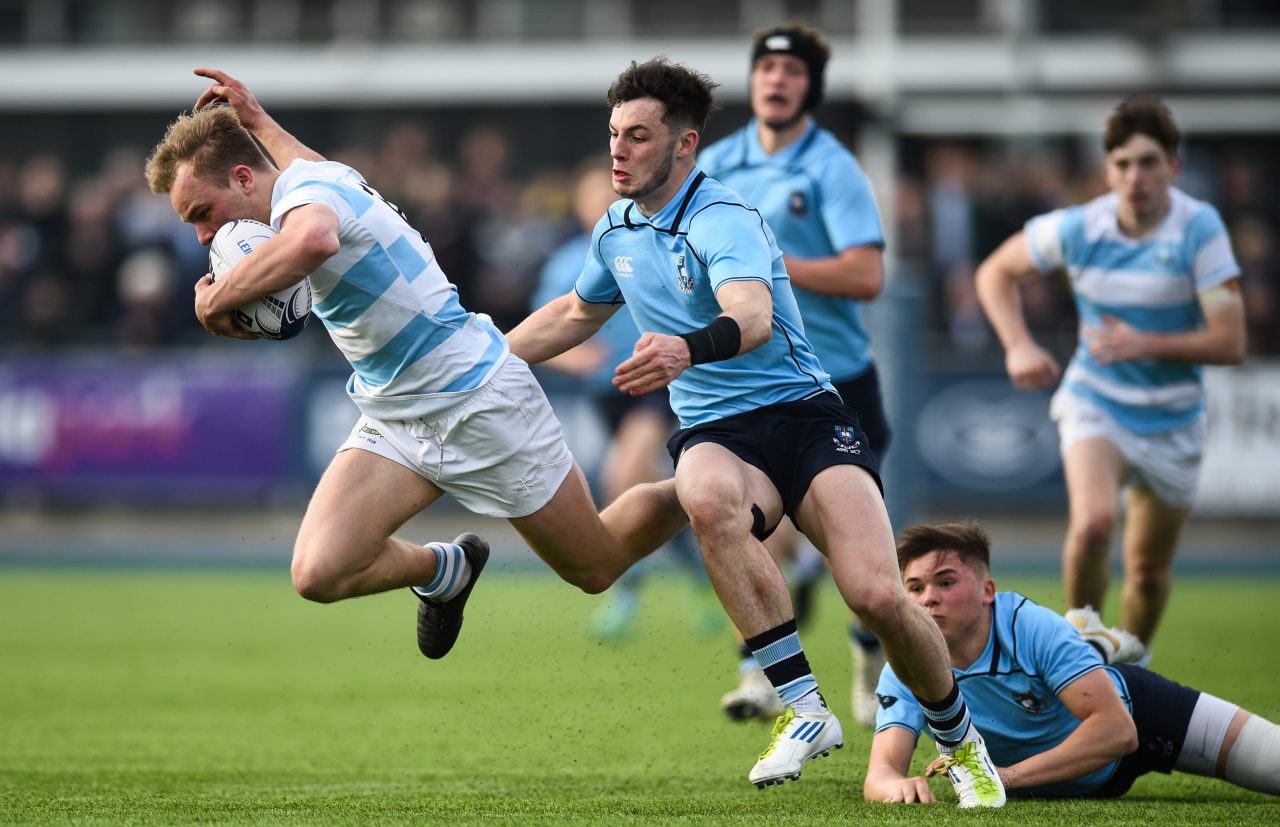 25 February 2019; Niall Comerford of Blackrock College is tackled by Andrew Smith of St Michael's College during the Bank of Ireland Leinster Schools Senior Cup Round 2 match between Blackrock College and St Michaels College at Energia Park in Donnybrook, Dublin. Photo by David Fitzgerald/Sportsfile

St Michael’s have set up a date with Belvedere College in the last four of the Bank of Ireland Leinster Schools Senior Cup.

To do so, they had to take on and dethrone holders Blackrock in a thrilling contest at Energia Park.

The high octane hard-hitting clash that was expected from the moment this tie was drawn was duly delivered from the first whistle.

The early stages were not particularly dominated by each team as they gradually sized each other up.

Michael’s eventually found their rhythm and with Chris Cosgrave leading the charge, managed to gain the advantage.

The centre was accurate with the boot as well as providing a lightning quick threat with ball in hand.

It was he who opened the scoring in the ninth minute with a close range penalty.

‘Rock needed a symbolic response of some nature but couldn’t muster one quick enough.

The Ailesbury Road school set up camp on the Blackrock goal-line and were held at bay for phase after phase until finally, at the second attempt, John Fish was able to ground the ball at the base of the post.

Blackrock’s best opportunity to add points in the first half came off the back of a Chris Rolland break.

He claimed possession of a loose ball on the edge of his own ’22 and split the Michael’s defence before offloading to Niall Comerford. It looked as though Comerford couldn’t be stopped but the flying figure of Robert Gilsenan brought him to ground and prevented the score.

Cosgrave had the opportunity to add another three to his tally just before the half-time whistle and made no mistake.

Rock’s lineout woes continued into the second half and prevented them, on more than one occasion, from escaping their own half.

When they did, they were unlucky. They were held up twice on the goal line before knocking on in a dangerous position allowing Michael’s some relief.

A David Fitzgerald penalty got ‘Rock off the mark and ignited a mini revival but with little reward on the score board.

Just after the hour mark, Cosgrave notched up another three on to his personal tally to give a much-needed cushion to Michael’s.

Blackrock weren’t done however and Scott Barron forced his way over the line with time almost up to set up a nail-biting finish.

A break from Comerford down the wing set pulses racing once more but when the ball was delivered back inside, it eventually ended up in the hands of Mark Hernan and Michael’s, delightedly, aimed for touch.