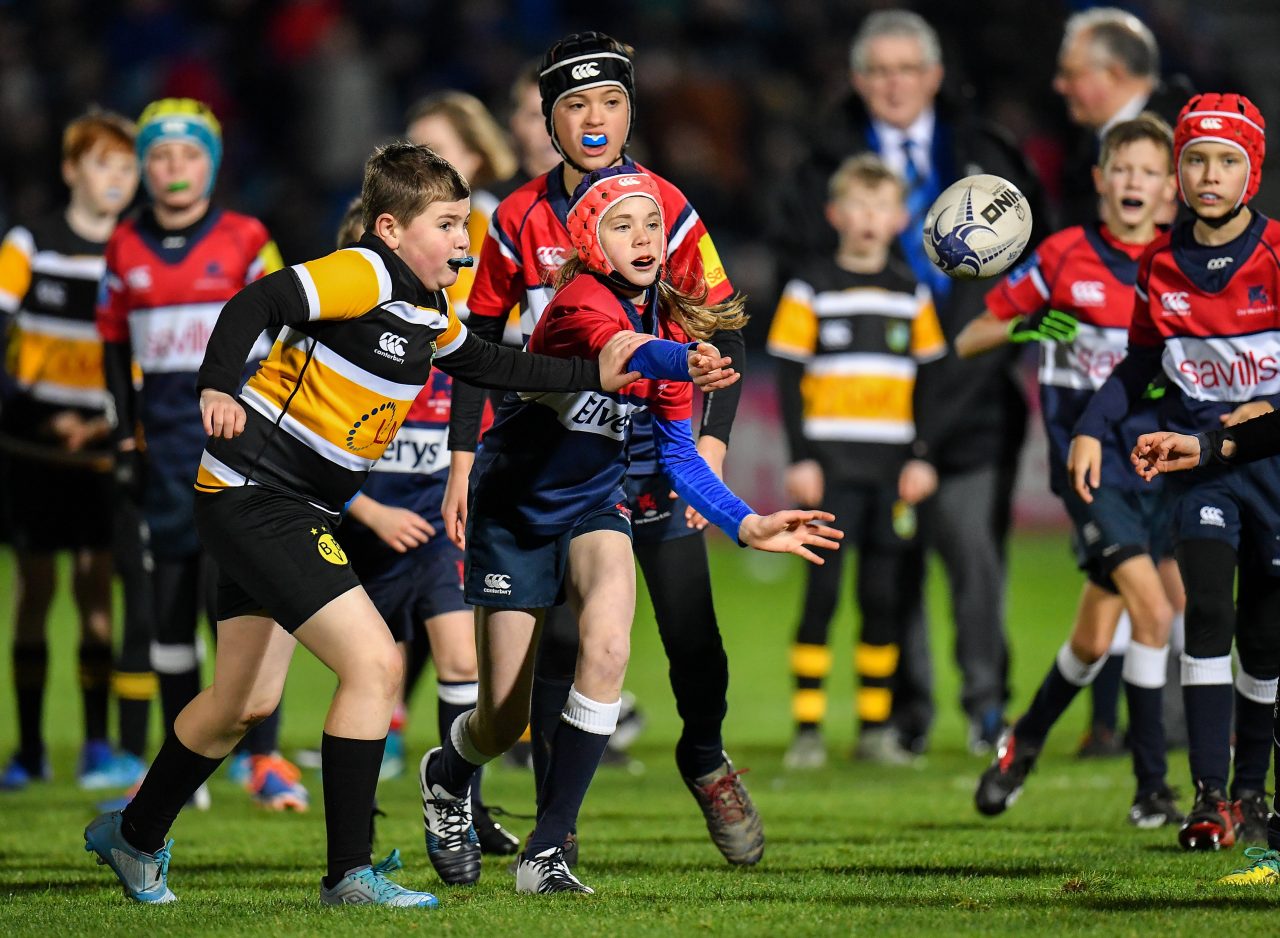 An integral part of every rugby club around the province is the mini section. In this section the children range from six years old (Under-7s) to 11 years old (Under-12). The emphasis at mini level is participation in a non-competitive, enjoyable, safe environment, with children getting game time and enhancing their education and development of the game.

At the start of September, when the season begins, boys and girls between these age groups are divided into Under-7, Under-8, Under-9, Under-10, Under-11 and Under-12.

Under-7s show up for their first formal introduction to the game of rugby, some are excited, some are a little shy and nervous and some will have parents or siblings that are playing or would have played and loved the sport. At Under-7 (leprechaun rugby), the main focus is to get the players to ‘pass backwards and run forward’. Tackling is not allowed, the children may only tag each other on the hips. They learn at this age to carry the ball in two hands. The children learn the basics through fun and games.

At Under-8, Stage 1 rugby, tackling is introduced, and coaches teach the technique of tackling from the waist down. The ball cannot be kicked, however rucks and mauls are introduced. Under-9 and Under-10, Stage 2 rugby, the players are started to divide into backs or forwards. Tackling is still below the waist, the ball cannot be kicked during play. The teams are allowed three players including the thrower in a lineout, but lifting is not allowed.  Three players are allowed in a scrum they must stay bound until scrum is finished and the scrum is uncontested.

At this age, the ball can now be kicked but only in the defence zone. Five players including the thrower are involved in the lineout, all forwards and no lifting is allowed. Five players from each team are in the scrum. including three front row and two second row. One step is allowed after the ball is put in by the scrumhalf and the ball may be struck. The players must stay bound until the scrum is finished.

At Under-12, Stage 4 rugby, tackling is still below the waist with hand-offs below the shoulder allowed.  No more than four players can contest a ruck/maul. Kicking is allowed only in the defence zone. Six players including the thrower are involved in the lineout, still no lifting. When a scrum is called each team are allowed six players, three front row, two second row and one back row. The same ruling applies as Under-11, only one step is allowed after the ball is put in. Players may stay bound until the scrum is over. By the time the children reach the end of their Under-12 season they are ready to progress onto youth rugby. 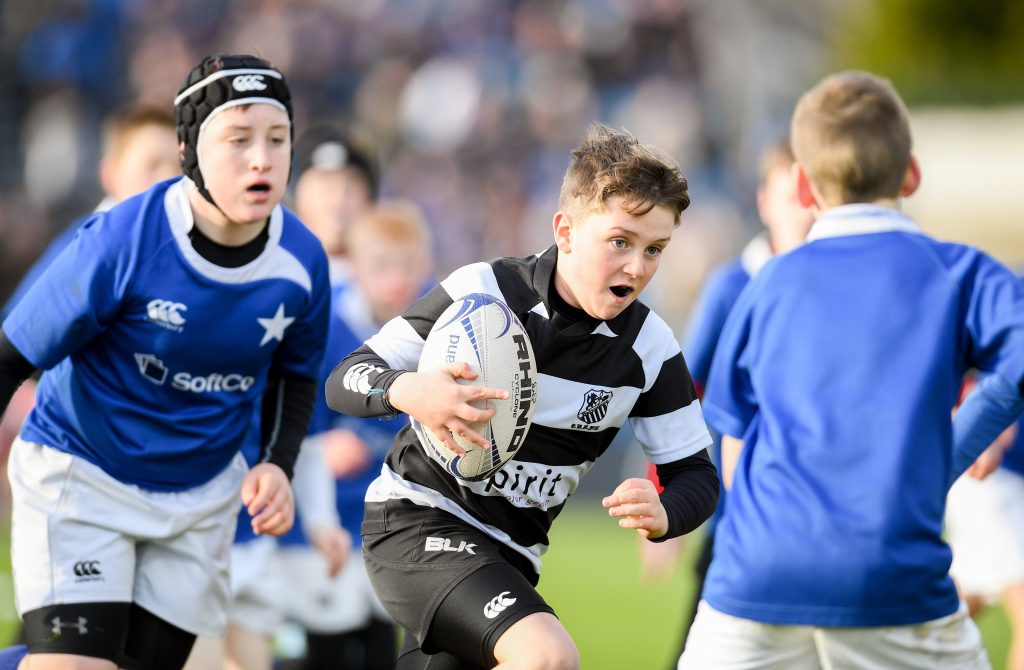 The Leinster Mini Committee are responsible for approving all festivals held in the province. A festival is where four or more clubs come together to play games. They ensure that these festivals reach certain criteria. To host a festival a club must apply to this committee for permission. If the committee is happy that the criteria is met, approval is granted. Most festivals are ‘pay for play’ where teams that enter must pay a charge for each team entered.  Other festivals such as the South-East festival is free of charge. These two types of festivals cater for a variety of clubs and give the children a chance to play teams that they wouldn’t normally play against.

The Leinster Mini Committee also run several Leinster festivals at the end of the season. These festivals have a balance of teams from across all the provincial areas. Teams have a wider variety of teams to play and don’t end up playing their neighbouring clubs.

‘The Kettle Cup’ (Under-10), ‘The Coyle Cup’ (Under-11) and ‘The O’Daly Cup’ (Under-12) are three of the competitions competed for at minis level. The Leinster Mini Committee are also responsible for answering any queries that clubs/coaches may have on the regulations throughout the season.

At the moment in Leinster there are 33 clubs with a mini girls section. This is the fastest growing sector in the sport. The age grades are Under-8, Under-10 and Under-12.

Presently, most Leinster clubs play inter-area blitzes. These blitzes give teams the opportunity to play a larger amount of games against different sides. Since 2016, Leinster hold a dedicated girl only festival. This caters for the age groups Under-10 and Under-12 and is usually held towards the end of the season.

During the summer, various clubs around the province run ‘Give It A Try’. This is an eight-week programme aimed at girls aged between eight and 14. The children who attend learn to play rugby in a fun environment. It is an ideal way for clubs to attract new players to the sport. In 2019, Leinster Rugby ran a one-day girls camp at Easter in Energia Park. This camp was aimed at girls between the ages of eight and 16 and proved to be such a great success that this year, there are three camps running, one each in Mullingar, Gorey and Energia Park.

Originally, when girls started to play rugby at mini level it was tag all the way. When the girls progressed to youth level it soon became clear that they were lacking in the skills of tackling and rucking. Some clubs then went back to mini level and started to coach the girls through the mini stages to tackle, ruck and form a scrum, the same as the boys. These girls going forward to youths now have a higher skill level. 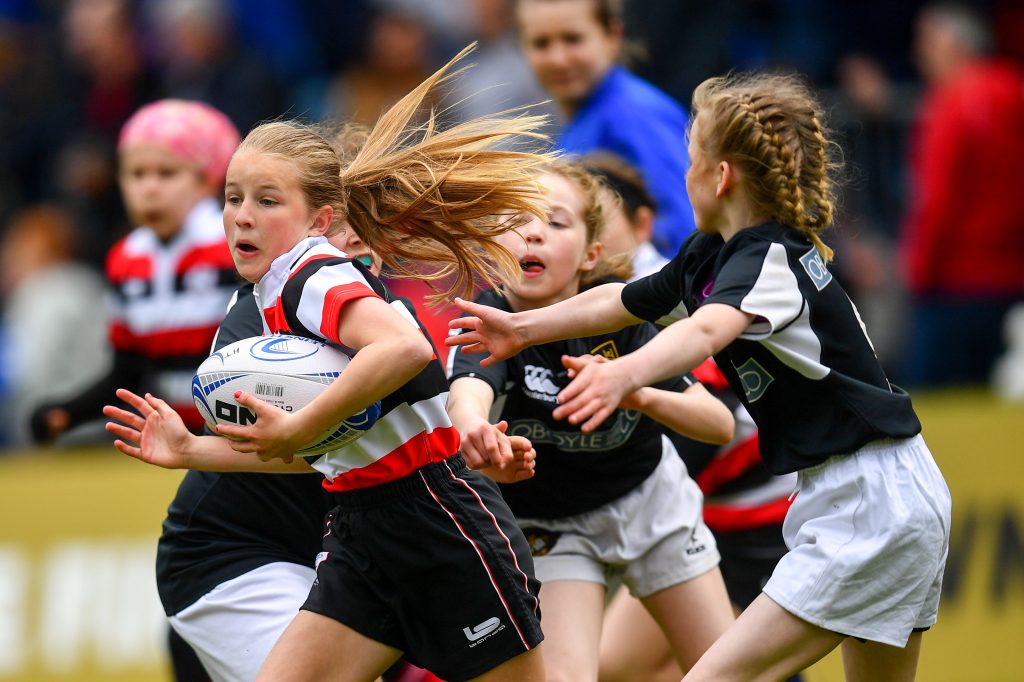 When the Leinster Senior team play at home the committee invite four Under-12 mini teams to play at half-time during the senior game. These games will be either in the RDS Arena or Aviva Stadium.

Every team in the province will get a chance to play at these games. There is a sub-committee of the Leinster Mini Committee who run these events on the day, ensuring that everything runs smoothly, getting over 100 people on and off the pitch at half-time. This creates great excitement for all the children and parents involved. One of the lucky teams are chosen at every game to be the flag bearers.

The children wave flags and cheer the senior team onto the pitch at the start of the match.  The teams even get the chance to meet some players and get photos taken with them. It is a fantastic occasion for the mini players, many of whom dream of wearing the blue jersey and representing their province.

During the summer at several locations across the province there are summer camps run by Leinster coaches. For many this is the first taste of rugby. During the camp some senior Leinster players make an appearance and, in recent years, we have been lucky to have the Guinness PRO14 and Heineken Champions Cup trophies in attendance too.

It is thought in many sectors of the branch that minis are the life blood of any club. If a club does not embrace minis, they have no youths which in turn leads to a lack of senior players. So as the saying goes; ‘From The Ground Up’, for the future of all rugby players at club, area, provincial and national level.

This article first appeared in the Official Matchday Programme for Leinster Rugby’s Guinness PRO14 clash with Cheetahs at the RDS Arena on 15 February, 2020.