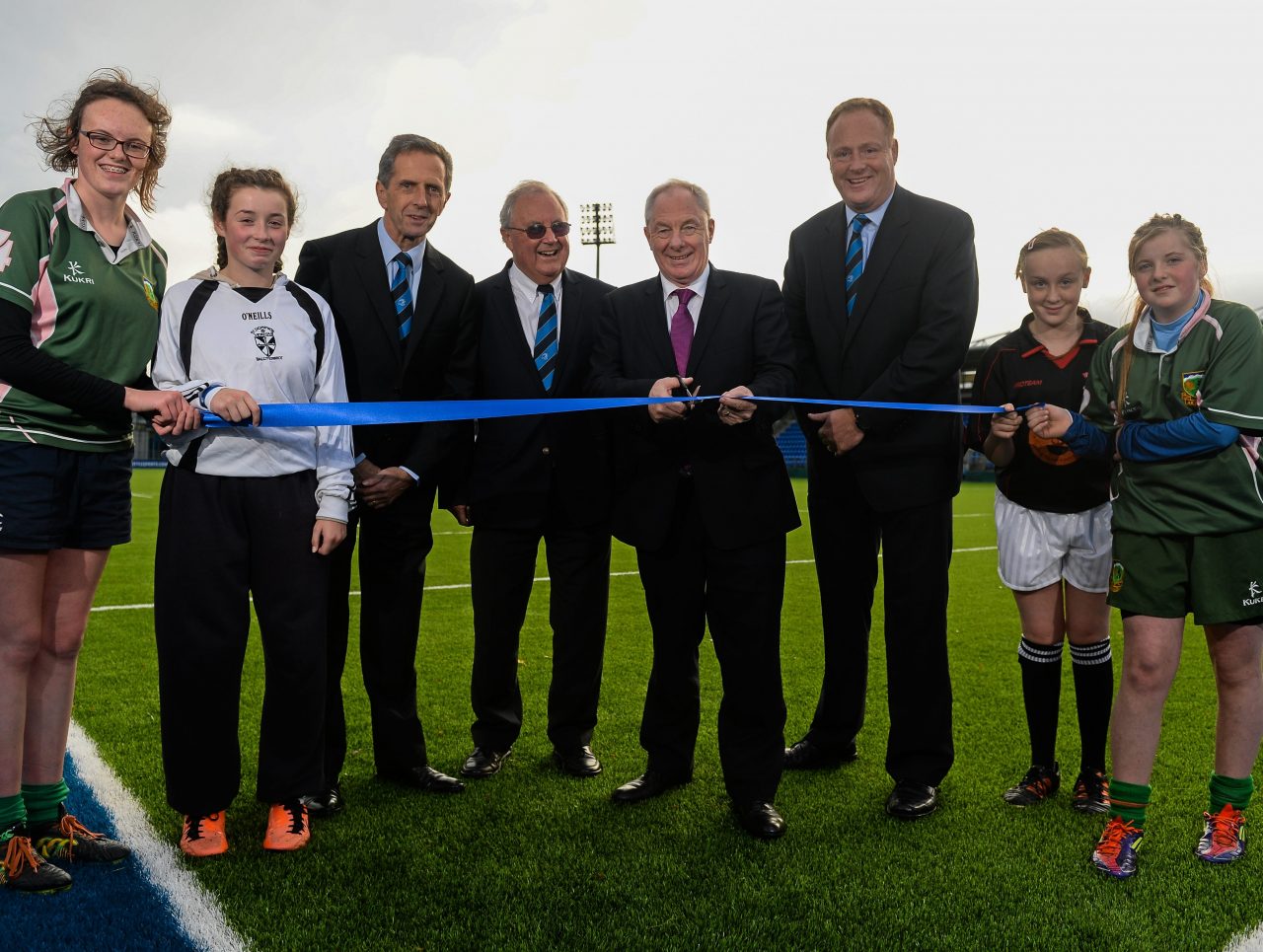 Michael Ring, T.D., Minister of State for Tourism and Sport, was the guest of honour as Leinster Rugby today officially opened two state of the art all-weather pitches in Donnybrook.

After much consultation, Leinster Rugby, with the generous support of the Department Transport, Tourism and Sport, elected to change the pitch surfaces in Donnybrook after researching the successful introduction of synthetic grass into rugby and other sports, particularly in the last number of years.

A special one-off grant of €;750,000 with matching funding from Leinster Rugby of a further €;250,000 was secured and the two pitches have already hosted a number of local club games, schools’ games and the recent Leinster ‘A’ win over Jersey in the British and Irish Cup.

Minister Ring commented, “I was delighted that my Department was able to support these wonderful facilities’ with a special grant allocation of €;750,000. It is wonderful to see the two state of the art all weather pitches completed and able to cater for such a large contingent. The Government continues to support the grass roots and in Budget 2015 I announced a third Sport Capital Programme, which will benefit sports clubs all over the country. These facilitates will cater for a range of players from young to old and that is what we strive to support”

Representing Leinster Rugby at today’s announcement was Leinster Rugby President, John Glackin, “This is a huge step for the domestic game in Leinster. We cater for over 38,000 players across the province in 75 clubs and just short of 500 primary and secondary schools. Everyone dreams of running out at Donnybrook and that dream is enhanced by this development.

“These superb pitches will allow us to facilitate far more games meaning that ultimately far more boys and girls from across the whole 12 counties of Leinster will benefit. We are extremely grateful to the Government and the Department of Sport for their support and to Minister Ring for his attendance today. This could not have been done without their considerable support.”

As girls from St MacDara’s Templeogue, Loreto Bray and St Dominic’s Ballyfermot played mini games on the main pitch, David Ross, Executive Services Manager at Leinster Rugby outlined that the investment was for the future, “These pitches last between eight to ten years while the padding beneath the ‘grass’ above lasts close to thirty years so it is money very well spend. We can now also guarantee up to 40 hours of rugby a week on both pitches. Such numbers were not feasible on the old grass surface.

“We visited a number of sites across Ireland and the UK, including leading clubs in a number of sports and in particular rugby. Saracens, Newcastle, Cardiff and the English Rugby Football Union have all invested in pitches such as the ‘Rugger 65’ pitches installed and the feedback has been very encouraging. Support in Sport have done an excellent job installing the pitches and we are delighted with how they are playing.”

After visiting and inspecting various surfaces in both Ireland and the UK, Leinster Rugby selected the ‘Rugger 65’ surface, manufactured by Support in Sport, as their preferred choice, similar to that currently being used by Saracens RFC.

All-weather pitches for rugby come under IRB Regulation 22 and there are seven listed suppliers of the all-weather surfaces listed and approved by the IRB, as well as five approved laboratories who test and approve the product.

The Donnybrook installation of two all-weather pitches, will greatly support more rugby for the two clubs based in Donnybrook – Old Wesley and Bective Rangers – but also Schools, Youths, Womens and Community programmes and usage.