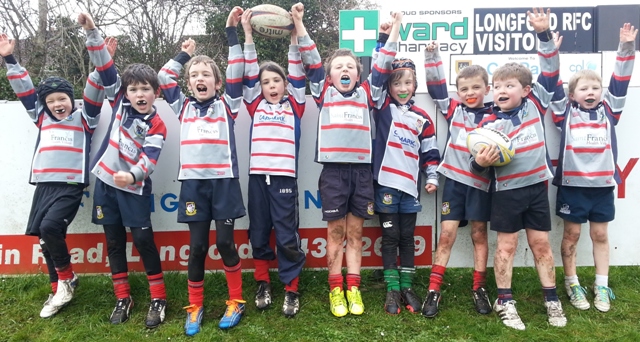 The latest notes on the MRFC Minis teams…

MRFC Under 8 teams were in full battle mode when they burst onto the hallowed grounds at Longford Football Rugby Club on Saturday March 29th for their penultimate blitz of the 2013-2014 season.

Joyous with the rare dry weather conditions in the neighbouring county, the Westmeath boys and girls displayed all their heroic rugby skills to the well attended and boisterous travelling supporters. Epic team performances left nobody in doubt that MRFC’s future is in safe hands.

Post-match analysis took place during refreshments at the Longford clubhouse where the wonderful hospitality was enjoyed by kids and parents alike. An excellent day of fun, muck and buns for MRFC’s Under 8s!

On Saturday 5th April our Under 8s, 9s & 10s travelled to Edenderry for their last Festival of Rugby of this season.

Our Under 11s went to Tullamore for the U11 Coyle Leinster Festival of Rugby.

Our Under 12s were at home for their Midlands Festival of Rugby which will be their first taste of rugby on a full pitch at 13 a-side. Teams are travelled from Edenderry, Longford, Naas & Tullamore.