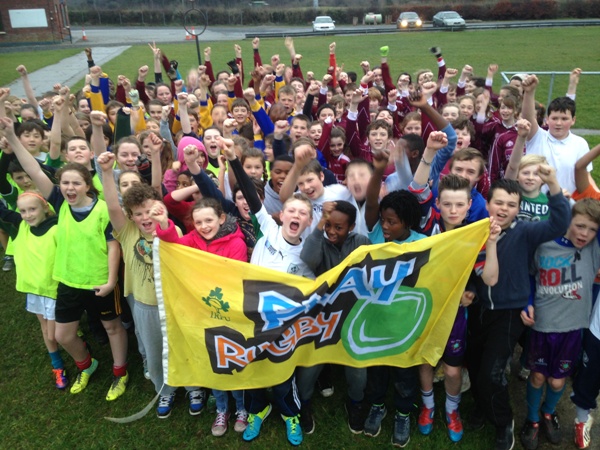 This was eagerly anticipated because the pre-Halloween blitz had to be postponed due to waterlogged pitches.

David Farrelly the CCRO for the Mullingar area had been visiting the schools since September and invited the schools to an inter schools blitz. The schools taking part were St Colman’s, Gaelscoil an Mhuillean, Gainstown, Curraghmore, All Saints and Educate Together National Schools.

All things considered it was a good day and perfect for displaying all the newly learnt skills. Indeed the referees helping out on the day were very impressed with the enthusiasm and talent shown. The emphasis was on skills and fair play rather than winning and consequently meant more players were involved in games. Each game lasted 10 minutes and every school got at least 6 matches, so plenty of game time for all.

After the games every player got some Leinster Rugby memorabilia as a reward for all their efforts. The teachers were delighted with the organisation of the event and thought it was brilliant to see that participation was more important than winning.

All Saints School was voted by the refs as the best school taking part. They were awarded a Play Rugby kit and so can play tag rugby anytime they want to.

A special thank you to the referees Claire O’Brien, Steve Coy Junior and Leinster CRO Steve Coy for their help on the day.
If anybody would like information about coaching in the Mullingar area, contact Leinster Rugby’s Club Community Rugby Officer, Dave Farrelly at MullingarCCRO@leinsterrugby.ie.