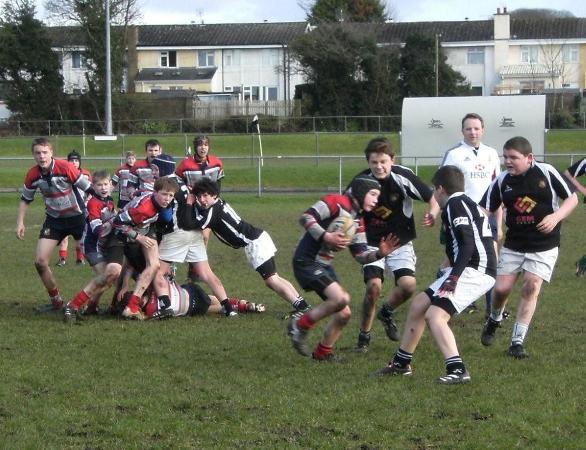 As the score suggests it was a quite one sided game with the Mullingar lads well on top throughout. Mullingar started very strongly and Conor Mc Keogh pounced on a poor Longford clearance to score a good breakaway try James Mahedy converted for the 7 points. Five minutes later Scrum half Luca Mulcahy popped the ball to James Mahedy after a good forward maul and he scored under the posts. Aaron Kennedy scored another try before half time which was converted by James Mahedy to leave us 19 points ahead at the break.

The second half began with a great move from Mullingar the ball was swept from the base of the ruck by Luke Carton the backs moved the ball quickly out the line to Aaron Dowling who raced into the corner for a great try which effectively finish the game as a contest, James Mahedy converted. Mullingar emptied their bench and as usual the lads who came on continued where the starting fifteen had finished.

Jenson Nagle scored another Mullingar try before Longford scored a consolation score right on full time. This was a scrappy enough performance from the lads and everyone knows we will need to step up a few gears to get back to the level of performance we were producing a few weeks ago which qualified us for the league semi final. It was noticeable during the game that a lot of the lads were still struggling to shake of the effects of the flu which has affected the squad so badly, plenty of hot drinks and early night’s lads.