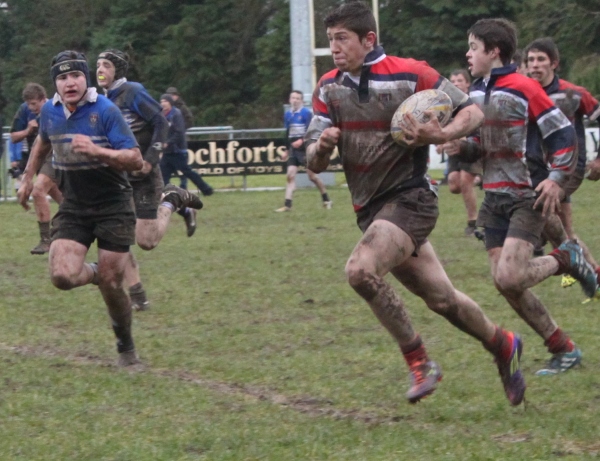 The Mullingar squad saw some of the U-14 team’s players drafted in for this match, on a cold day with wet and muddy conditions underfoot.

Wexford started well with early pressure on the home team. In one such attack Mullingar turned over the ball resulting in a fine try by Cillian Fagan. Wexford responded with a try within minutes. That was the pattern of the first half with both sides trading one more try each to leave the interval score at 10-10.

A rejuvenated Mullingar team started the second half playing the better rugby with very well worked tries by Jamie Fitzgerald and Alex Dinu (2). With two of these tries converted by Sean Whelehan the score stood at 29-10 in favour of Mullingar.

The final minutes proved to be very exciting. Intense pressure by Wexford on the Mullingar line was strongly resisted for over five minutes until a three-on-one overlap produced a try for Wexford. It was followed a few minutes later by a breakaway try by the excellent Wexford winger under the posts. This reduced the deficit to 7 points.

Wexford had the bit between their teeth at this stage and piled on the pressure. Although understrength, Mullingar  withstood the pressure very well, with bodies put on the the line to defend the lead.

It was a great game, played in a good spirit. Huge credit must go to the available lads who to a man stepped up to the mark. A special thanks to our U-14 players, Eric Fitzpatrick and Matt Doyle, who helped out enormously in second row.

Next week Mullingar travel to Tullow RFC for the final Leinster League phase two game and hope to continue their unbeaten run this season.