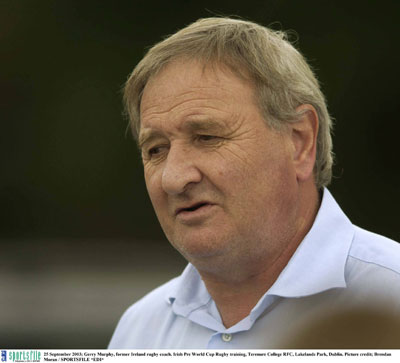 Gerry played for Dublin University and Wanderers where he began his coaching career. He spent a season with Clontarf before coaching the Ireland Under-21 squad and the Development squad that toured South Africa.

The Dubliner then led Ireland from 1992-95 including successive victories over England in Dublin in 1993 and Twickenham in 1994 and his spell concluded by guiding Ireland to a quarter-final place in the 1995 Rugby World Cup in South Africa. He also spent six years coaching with Terenure College.

Tommy Bowe (Ospreys and Ireland) has been named GUINNESS – Rugby Writers of Ireland PLAYER OF THE YEAR and All Ireland League and Cup Champions, Cork Constitution FC were voted CLUB OF THE YEAR.

The Ireland Under 20’s, led by Leinster’s Rhys Ruddock, picked up the Dave Guiney perpetual award as TEAM OF THE YEAR in recognition of their Six Nations triumph.

The two new members inducted to the GUINNESS HALL OF FAME were back-row forward Willie Duggan and winger Cecil Pedlow.

Willie was widely regarded as one of the world’s top No.8’s and in 1977 he was selected to represent the British and Irish Lions on the tour to New Zealand.

Oliver Loomes of Guinness and Brendan Fanning, Chairman of the Rugby Writers of Ireland, jointly presented the awards.