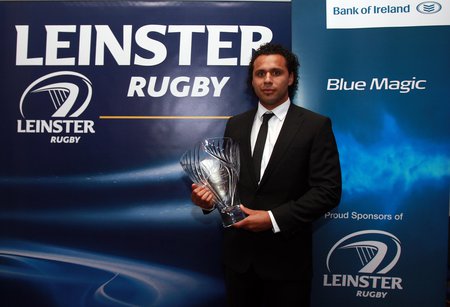 Leinster Rugby are delighted to announce Isa Nacewa as the winner of the Bank of Ireland Leinster Players Player of the Year at the Annual Awards Ball which was held in the Burlington Hotel, Dublin on Saturday night…

Nacewa has been a standout performer for Leinster again this season having featured in all but one of the province’s games in both the Magners League and Heineken Cup competitions.

Just this week the 28-year-old was also awarded the IRUPA Player of the Year award and Coach Joe Schmidt hailed Nacewa’s outstanding performances over the course of the campaign.

Leinster Coach Joe Schmidt said: “I would like to congratulate Isa on receiving this award which was voted for by his team-mates in the Leinster squad. Isa’s durability, commitment, experience and rugby talent have seen him perform at a consistently high level in every match he’s played this season.

“As a leader, Isa is recognised by his peers as one of the benchmark players within the squad. He is professional in all that he does: his recovery, strength and conditioning work, analysis of opponents, attention to detail to improve his own performances. He is utterly committed to the values of the squad and readily shares his knowledge and experience with the younger players.

“Never one to rest easily with personal accolades, I know that Isa will be keen to point out the efforts of his team-mates this year, but he should be proud of this recognition on what is a great night to celebrate the achievements from all sections of the Leinster Rugby community.

“I would like to congratulate all of the winners on the night and thank everyone from the various Youths, Club, Schools and Women’s grades who help foster a passion for the game. The contributions of parents, coaches, administrators – alongside the players – form a strong base upon which rugby can flourish in Leinster.

“It is vital that we continue to highlight their efforts to enhance the appeal of the game and a night of celebration such as this is an excellent way to thank all those involved for their contribution.”

Centre Eoin O’Malley (22) has been named the Powerade Young Player of the Year and the Leinster Academy graduate fought off stiff competition for the accolade from a number of his team-mates in this category. Since overcoming a nightmare spell of injury, the Belvedere College SJ former Schools Senior Cup winner has made a positive impact in the Senior panel this year and his Heineken Cup debut was quickly followed by his first Ireland Wolfhounds caps earlier this year.

Meanwhile, it was a night for double celebrations for Isa Nacewa who also picked up the Evening Herald Try of the Year as voted for by supporters for his effort in the Heineken Cup Quarter Final victory over Leicester Tigers at the Aviva Stadium. Leinster, Ireland and British & Irish Lions legend Niall Brophy was inducted into the Guinness Hall of Fame to mark an outstanding playing and administrative career, while Dominic Ryan picked up the Comans Tackle of the Year award for his tackle on Julien Malzieu away to ASM Clermont Auvergne in December.

Special presentations were also made to the imminent departing and retiring members of the squad to thank them for their service while Shane Horgan – the first player in Leinster’s history to pass the 200 cap mark – was also acknowledged.

Skerries RFC’s Owen Taaffe has been named the Evening Herald Club PRO of the Year while Clongowes Wood College SJ picked up the Powerade sponsored School of the Year after another outstanding campaign on all fronts. The massive strides which Newpark Comprehensive has made in recent years were acknowledged as they received the Bank of Ireland Special Merit Award.

Sports Personality Tracy Piggott was MC on the night which was attended by a broad spectrum of close to 400 supporters, administrators, club and schools representatives as well as the Leinster squad.

Like any thriving local club side, Skerries is much the focal point of the community and a club who have produced a stream of outstanding administrators and players over the years. It is worth noting that during the Winter cold snap, they opened the gates of their club with open arms to the Leinster squad when all other grounds were deemed unplayable, a gesture which facilitated the squad’s preparations for the December Heineken Cup ties against ASM Clermont Auvergne and summed up the ethos of the club. Owen has consistently raised the bar with consistent coverage of the progressive north Dublin seaside club both locally and nationally and is a worthy winner of the Evening Herald Club PRO of the Year.

Clongowes are worthy recipients of the Powerade Schools of the Year award after an outstanding year at Senior level in which they won the Powerade Schools Senior Cup, the Premier Division of the Seconds League and the Foster Cup (Thirds League) where they had both finalists. However it was the quality of their rugby that was much to the fore – witnessed in their Senior semi-final victory over St. Michael’s College and in the Junior Cup matches with Terenure and Blackrock.

Newpark continue to make significant progress as a rugby school. Their Senior team won the Section ‘A’ League for the second year in a row, the Vinnie Murray Plate and the McMullen Cup this year. They have made huge strides as a rugby force in recent years under the direction of Andrew Adams and Morgan Lennon and have produced significant numbers of players to the Leinster ‘A’ Schools team and beyond.

Carmela Morey has almost single handedly been responsible for the incredible development in Womens Rugby in Cill Dara RFC. In addition to being Cill Dara’s Senior Women’s teams Captain for the past two seasons – and being selected for the Leinster Womens squad this year – it is her organisational and interpersonal skills that have earned her this award. Mel has recruited, organises and coaches over 30 young girls across two Age Grades in Cill Dara each week. The girls teams have attended every Leinster Blitz, coaching clinic, and Leinster run event this year. Never too busy to lend a hand, advise with the Women’s Competitions committee or attend an event, her girls were selected to be the first girls ever to play in the Aviva Stadium, and to join the boys playing in the IRFU’s Mini Rugby Festival. In conclusion her hard work and support of Women’s Rugby at all levels make her a deserving recipient of the Women’s Clubperson of the Year award.

Sinead has been nominated for this award as a result of her consistency and reliability as a player, and for her leadership both skills on and off the pitch. Despite only taking up Rugby upon joining NUI Maynooth in 2000, her great attitude and natural ability as a player has already taken her far. As the Leinster Women’s team Captain for the first time this season Sinead excelled, using her experience in playing for Ireland and previous Leinster seasons to lead from the front. It is due to these fantastic qualities that Sinead Ryan has been nominated as this season’s Leinster Women’s Player of the Year.

Boyne has enjoyed a fairy tale season, winning the Leinster League and, as a result qualifying for the Ulster Bank League next year. Central to that success has been their mercurial centre Bevan Duffy. A product of the Drogheda club’s successful youth policy (incidentally Shane Horgan and Niall Ronan also came through this nursery) Bevan has ignited the League with his pace and skill, and only last weekend scored a pair of tries for the Leinster Juniors in their interprovincial success over Munster. A truly unanimous choice among his peers, Bevan has been voted Canterbury Club Player of the Year for the second year in succession.

St. Mary’s College RFC has again set the standard for others to follow by fielding teams in Leagues at all levels from Senior right down to J5 while also putting two Under-21 teams regularly on the park. Four League wins, together with a League and Cup double for the J1’s, is testament to the tremendous work being done behind the scenes in Templeville Road. Add in a Women’s League success and you can see why Mary’s have earned the Canterbury Club of the Year honours for 2010/11.

The former Blackrock College, UCD, Leinster, Ireland and British & Irish Lions winger enjoyed a distinguished career at Schools, Club and International levels where he made 20 Ireland appearances and was capped twice for the Lions. He made his Ireland debut against France in Lansdowne Road in January 1957 and earned the last of his caps away to Australia in Sydney in May 1967. On the 1959 tour to Australia and New Zealand both he and Bill Mulcahy became the first UCD players to be selected for the British & Irish Lions though he missed most of the tour through injury. He made his debut for the Lions three years later in South Africa. A Chartered Accountant and a Past President of the Leinster Branch (1981/82), Blackrock College (1985/86) and the IRFU (1997/98) – in 2002/03 Niall was inducted into the Rugby Writers of Ireland Hall of Fame and he was recently named in the UCD Team of the Century.