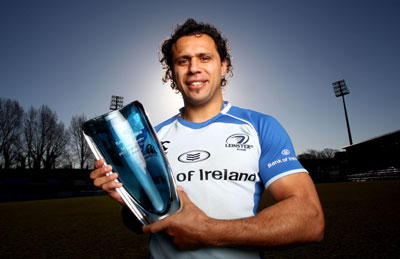 Click HERE for an exclusive interview with Isa Nacewa

He was presented with the award earlier this week by Fergus Hickey, Business Adviser, Bank of Ireland.

Isa played in all 7 games that took place during the period including the two bonus point winning games in the Heineken Cup, the second of which secured the home quarter final game.

He contributed to Leinster’s score in all but one game kicking 9 penalties and 5 conversions as well as scoring 2 tries. This, combined with his consistent all round play, meant the majority of supporter nominations were for him.

Winning the monthly award puts Isa in contention for the Bank of Ireland Player of the Year award which is announced at the annual Leinster Awards Ball. Thank you to everyone who voted this time and congratulations to Isa.

Voting is now open for the March Bank of Ireland Leinster Rugby Player of the Month.

To nominate a player from any or all of the games this month simply e-mail information@leinsterrugby.ie telling us which player you want to vote for and why. Everyone who nominates a player is in with a chance to win a gift voucher.