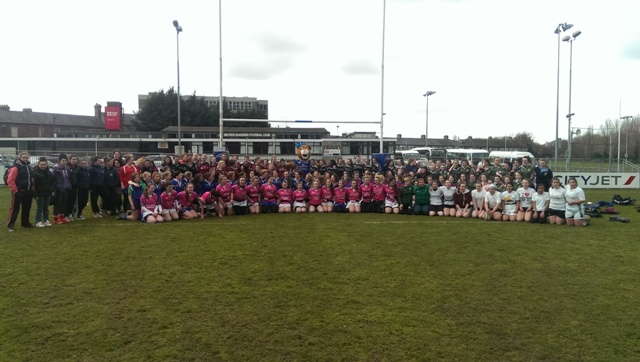 In an exciting day of Leprechaun Rugby, nine finalists met in Donnybrook for a new schoolgirl’s rugby competition…

The schools came from all areas of the Province, having qualified from one of six Area Blitzes, which involved girls of all secondary ages.

Loreto in Bray brought teams that included several experienced full contact club rugby players, while others such as Ardscoil na Trionoide from Athy, and St. MacDara’s school from Templogue near St. Mary’s Rugby Club, where girls club rugby is only in its infancy, travelled with girls who’s only rugby playing experience was in the school environment. Nevertheless, these girls were equally competitive and keen to do well.

The new ‘hybrid’ Leprechaun/Tag version of the game that was played in this Schoolgirl’s competition incorporates small uncontested scrums and lineouts and is a fun form of rugby that is growing at a great pace.

Increasingly teenage girls are recognising the opportunities and enjoyment in playing women’s rugby and ‘Lep’ is a simple and fun way to get involved.

With girls club rugby on the increase – growing from seven clubs involved in competition just three years ago to almost 30 this season – Leinster Rugby are working hard on programmes and initiatives to introduce girls to the game in their school environment also.

This Schoolgirls Competition was the first one run in several years and over 50 schools have been involved over the past six weeks.

A fantastic example of schoolgirls progressing quickly into club rugby as a direct result of this competition can be seen in Wexford. Having held a toughly contested ‘Area Qualifier’ for several local schools, it was Wexford V.E.C who won the opportunity to bring a squad to Dublin for the finals. The Wexford team brought along some talented new players, several of whom have already joined Wexford RFC’s Vixens team.

Other schools involved have plans to develop rugby beyond girls simply playing the game. Tullamore College particularly have fantastic plans to run a Transition Year programme which will roll rugby out throughout the school with older girls mentoring and coaching younger players next year. This type of proactive approach is a welcome development – to empower girls and consolidate their knowledge of the game through coaching and refereeing will be a crucial step for girl’s rugby.

An example of just how far these skills can take these girls can be seen in Ireland number 10 Nora Stapleton. A die-hard Gaelic Games fan and fantastic football player, Nora has turned her hand also to rugby and is now a Six Nations winner, and works full time for the IRFU as the country’s first National Female Development Officer. It can be no coincidence that several other members of the Irish Women’s Team have also competed in other sports at a high level.

“The opportunities for girls taking up rugby in their teenage years are huge,” says Jennie Bagnall, Leinster Womens Development Officer.

“Many of the current Irish Six Nations Championship winning team didn’t begin to play Rugby until 18 or beyond. The fact that schools are getting behind Leinster Rugby in their bid to introduce girls to all forms of the game at a younger age is a significant development.”

A variation of the game not too far from tag rugby is rugby 7s.

For the second year running the IRFU will be taking an Irish Girls 7s team to compete in England at the UK School Games, an event in which Ireland did very well last year. Provincial screenings will be advertised on the IRFU website, and will be taking place during the Easter holidays. We hope that in the future many of the girls playing here today might be involved in such programmes.