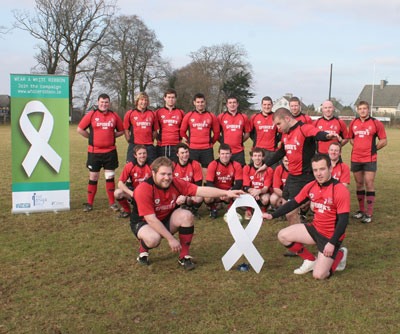 New Ross RFC and West Offaly Lions showed their support for the White Ribbon Campaign as the teams posed for photographs wearing white ribbons prior to the game with the hope of raising awareness of this important issue and the role that men have to play in stopping violence against women.

Three leading national organisations have joined forces to rally Irish men to become part of the solution to ending violence against women.

The alliance and campaign, under the banner The Other Half, believes that the work to end violence against women can only be fully tackled by harnessing the energy, support and understanding of the additional 50% of the population.

Men make up half the population. However, for a variety of reasons, violence against women has been largely tackled by women and has, by default, been seen as a women’s issue. It is time to move on from this and to recognise men as potentially powerful allies in the fight against gender based violence, says the alliance.

Violence against women is an enormous problem in Ireland with thousands of women experiencing rape, physical assaults, rape and sexual assault, emotional and financial abuse and many other forms of exploitation every day.

“However, the vast majority of men are not perpetrators of violence and are concerned for the safety of the women they care about,” said Sharon O’Halloran, Director of SAFE Ireland. “They are potentially powerful allies and activists against violence.”

“We will be asking Irish men to support our work and speak out in the face of violence,” Fiona Neary, Director of RCNI, added.

Alan O’Neill, Director of the Men’s Development Network, explained that men have largely not considered the issue of violence against women and have opted out from being part of the solution.

“In our experience, men do not address the issue of violence against women for fear of being identified as perpetrators themselves or for fear of saying the wrong thing,” he said. “Also, men have been excluded to date from the work to end violence for very practical reasons –as in the large majority of gender based violence the perpetrators are men. While we can never forget that some men are the problem we must also recognise that all men can be a part of the solution.”

The White Ribbon Campaign is the first project of ‘The Other Half Alliance’. To date it has been hugely successful with a launch in The Mansion House, Dublin in November which saw support from a number of high profile personalities including Miriam O’Callaghan, Míchéal Ó Muircheartaigh and GAA all star Paudie Kissane. The White Ribbon Campaign is recognised internationally as a movement which invites men to play a role in ending violence against women.